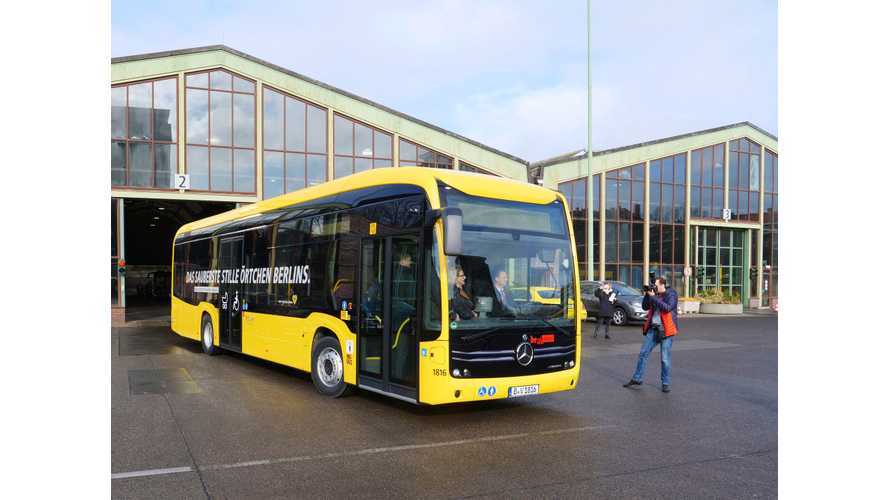 The German manufacturer already delivered eCitaro to several cities, but it seems that the initial roll-out progress slowly without big orders, often seen in some other European countries. It could be a similar case as with plug-in car market, which takes off slowly but once it gets traction, could be one of the biggest.

The other thing is that Mercedes-Benz eCitaro currently is equipped with batteries of 243 kWh, which is enough only for 150 km (93 miles) in the SORT2 test cycle, while transport agencies often would like to get 2-3 times higher range.

Mercedes-Benz eCitaro: a new chapter in emissions-free mobility in Berlin

Till Oberwörder, Head of Daimler Buses, handed over the key of the first eCitaro to Dr Sigrid Nikutta, Chairwoman of the Board of Management and Member of the Board for Operations at the Berlin transport company BVG. Oberwörder: "We are delighted that our eCitaro is now energising Berlin. With the locally emission-free eCitaro, the BVG has opened up a new chapter in the story of environmentally-friendly mobility. Of particular importance to me, is the fact that we are also supporting our customer with tailored consultations and customised service packages as they gradually change over to electromobility."

Dr Sigrid Nikutta: "We are improving the quality of life in Berlin. At present we have about a billion passengers annually and two-thirds of them are already transported electrically in the metro, on overground trams and on our solar-powered ferries. These first few series-production buses mark the start of changing our bus fleet to environmentally-friendly, electrically-driven vehicles."

The presence of Svenja Schulze, Minister for the Environment, Andreas Scheuer, Minister for Transport, Regine Günther, Senator for the Environment, Traffic and Climate Protection in Berlin and Ramona Pop, Senator for Economic Affairs, Energy and Public Companies in Berlin and Chairwoman of the Supervisory Board at BVG demonstrates the significance of the long-term changeover from combustion engines to locally emission-free drive systems for urban buses.

The Mercedes-Benz eCitaro is ideally suited to the legendary Berlin air because it is locally emissions-free and almost silent. The fully electric Mercedes-Benz eCitaro brings electromobility for city buses to a whole new level, because it impresses with optimum energy efficiency. The basis for this is a unique thermal management with a heat pump for heating the passenger compartment, as well as temperature control for the battery and connected components. Many of these have been made available for the first time in line with the advent of the eCitaro. Its exclusive design is derived from that of the popular Mercedes‑Benz Citaro and makes for a very distinct appearance – the eCitaro is a very special type of Citaro.

Extensively equipped: the eCitaro for Berlin

The eCitaro buses ordered by BVG are characterised by their extensive equipment. Passengers benefit from an air conditioning system, 15 double USB ports for their own end devices and three monitors for information provided during the journey. Passengers with reduced mobility will notice generously dimensioned areas for wheelchairs and pushchairs, as well as tactile handrails with ribbed handle profiles on the doors or the contrast-rich interior design. Bus drivers will appreciate the exterior camera for keeping an eye on cyclists and pedestrians. Interior surveillance cameras and a door-closing warning system with red LED light strip and video surveillance provide for added safety.

The eCitaro is fitted with ten battery modules providing a total capacity of 243 kWh which guarantee a range of around 150 kilometres even in difficult conditions. Under ideal conditions, the eCitaro can even cover around 250 km without being recharged. The batteries of the 15 eCitaro buses destined for BVG are charged at the depot using plugs.

BVG and the three-pointed star

Last autumn, BVG placed an order for up to 950 low-emission Mercedes‑Benz Citaro buses. It is the largest single order ever for Europe's best-selling city bus. At almost the same time, BVG also ordered 15 fully-electric eCitaro buses.

Berlin transport company BVG keeps the city on the move around the clock: Germany's largest municipal transport company operates more than 1400 buses on around 150 bus routes, more than 60 night bus routes and 22 tram, ten underground and six ferry routes. BVG employees almost 15,000 employees including those from its subsidiaries and transports more than one billion passengers annually.

Daimler Buses is getting Berlin into shape

Daimler Buses is drastically expanding its service competence for buses at its Berlin location. The German market leader for touring coaches and urban regular-service buses is investing a two-digit million sum in a new-build on the grounds of the BusWorld Home operation and is thus giving a clear signal about its commitment to the location in the German capital. With this comprehensive construction project, Daimler Buses will be well-equipped to deal with future challenges and the increasing number of touring coaches, including those with electric drive systems. The new-build on the 16,000‑square-metre piece of land will, among other things, also provide specialist jobs for those working on high-voltage systems.