We Have An Interesting Question For Tesla Fans: What Is A Gigafactory? 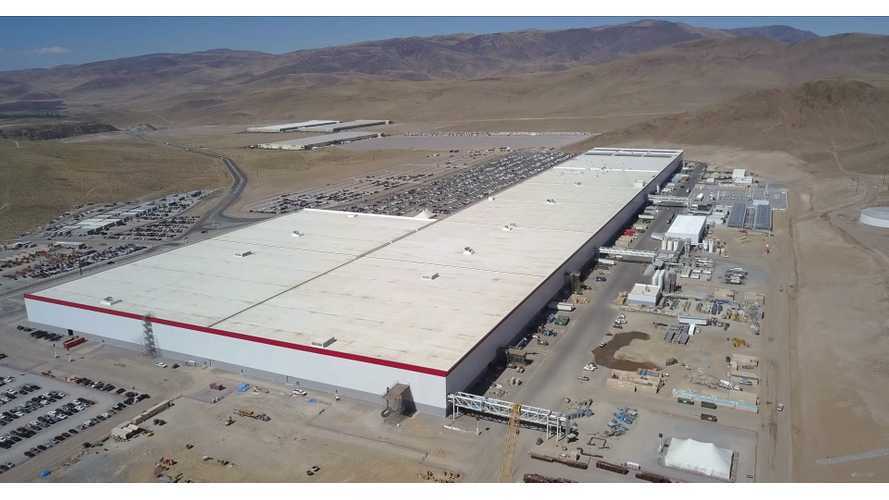 POP QUIZ TESLA FANS: WHAT, PRECISELY, IS A GIGAFACTORY?

With so much buzz surrounding Tesla's new Gigafactory 3 in Shanghai, some of those newer Model 3 owners might be secretly wondering — a Giga-what? So let's take a second to explain what this moniker really means. Mike Brown at Inverse dives (head first) into this topic, reminding readers: "One of the most impressive machines from Tesla isn’t a car, but a factory."

Above: Inside the lobby of Tesla's Gigafactory in Sparks, Nevada (Image: Lifeinism)

So what exactly is this special Giga-factory? According to Brown, "Musk is believed to have first coined the term 'Gigafactory' in November 2013, when he told investors during the company’s third-quarter earnings call that 'there is going to need to be some kind of giga factory built' to handle the company’s upcoming high-volume production vehicle, the Model 3."

Later, "Musk went on to say that the output would need to be 'something that’s comparable to all lithium-ion production in the world in one factory.' The word comes from the prefix 'giga-,' which is used to denote a measurement that’s been multiplied by one billion. A common example of this is with the kilogram, which adds the prefix 'kilo-' onto 'gram' to denote one thousand grams. 'Giga' is believed to come from the Greek word 'gigas,' meaning 'giant.' In short, Musk is saying he wants a really huge factory."

Above: Explaining the real meaning behind Tesla's 'Gigafactory' (Youtube: Inverse)

And, according to Brown, this will be a very, very big factory indeed: "When complete, the Nevada Gigafactory is expected to cover over 4.9 million square feet of space over numerous floors. This is expected to make it the largest building in the world. The building is only 30 percent complete at this stage, though, covering a space of 1.9 million square feet. The total plot of land measures five square miles."

And output from this Gigafactory is equally impressive: "In August 2018,  announced that it had reached an annual production rate of 20 gigawatt-hours, more power than all automakers combined...  Alongside the batteries, the factory produces electric motors for the Tesla Model 3, the company’s cheapest-ever car, plus the Powerwall and Powerpack energy storage systems designed to work with renewable sources."

Above: Elon Musk on a March 2015 tour of the construction of Tesla's Gigafactory 1 in Sparks, Nevada (Flickr: Steve Jurvetson)

And, Brown notes that the Nevada Gigafactory's "planned annual production rate is set to reach 35 gigawatt-hours by 2020, exceeding the total global production of batteries in the year 2013. It’s enough to send 500,000 vehicles onto the road." With Shanghai's Gigafactory officially launched and talk of "building more Gigafactories, including one in Europe," Tesla is poised to be the reigning king of batteries for the foreseeable future.