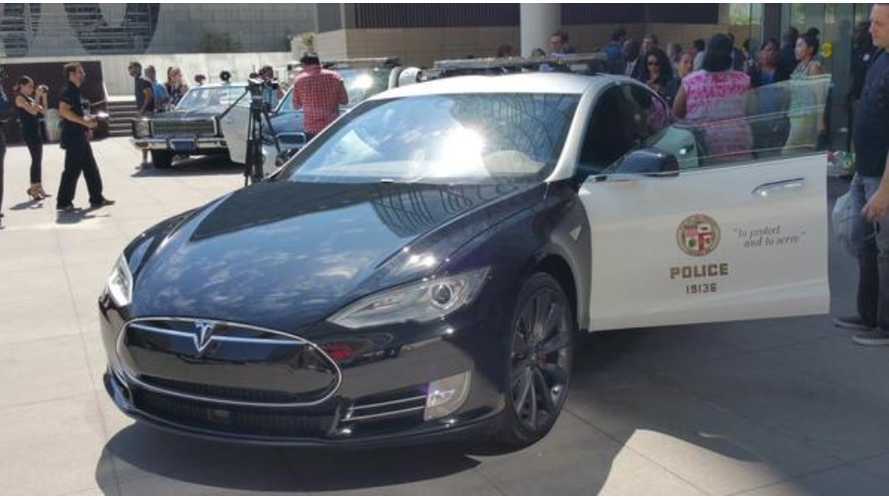 While the Fremont Police Dept. has adopted some F-150s, its new Tesla Model S patrol car is sure to make an impact.

We've said all along that government agencies should be racing to buy EVs for an abundance of reasons. They're fast, reliable, cheap to fuel, and environmentally friendly. With the current U.S. administration in place, we doubt this will become a real trend, at least for now. Nonetheless, we've seen and shared several instances in which municipal organizations across the globe have added electric vehicles to their arsenal. Now, long after we anticipated, the Fremont Police Department has adopted a Tesla Model S.

The Fremont Police Department was smart in terms of its budget. It didn't pony up the big bucks for a brand-new Tesla. Instead, it took ownership of a 2014 Tesla Model S. This is partly due to the fact that it also plans to spend extra on several necessary upgrades. In the end, the used Model S, plus its upgrades will cost the agency about $65,000. According to SFGate, the department plans to add "a partition cage, sirens and lights, push bumper, ballistic barriers, equipment console and more."

A recent press release quoted Fremont Police Captain Sean Washington. He said that this new acquisition is just one of many upcoming Fremont initiatives to adopt and utilize clean energy. He shared (via SFGate):

Given that Fremont Police vehicle fleet is responsible for a total of 980 metric tons of carbon dioxide emissions annually, this program has the potential to eliminate 10 percent of all municipal greenhouse gas emissions.

Fremont PD's Ford Explorers ($32,365 base MSRP) cost about $40k to modify. On top of that, the department spends as much as $32,000 to gas them up over five years. Moreover, maintenance adds some $15,000 over that course of time. Crunching these numbers strongly suggests that a used Tesla will be less of a financial burden overall. On top this, even when buying a Tesla used, the department assumes the EV will have a longer active lifespan than that of most traditional ICE vehicles.

Hopefully, the used Model S will work out well for the agency, and Fremont, as well as other police departments will move forward with similar investments. This only makes sense since the city of Fremont intends to reduce greenhouse gas emissions by some 25 percent by 2020, as compared to its initial study of emissions in 2005.

If you're interested in obtaining a used Tesla Model S, check out our sister site, MYEV.com.