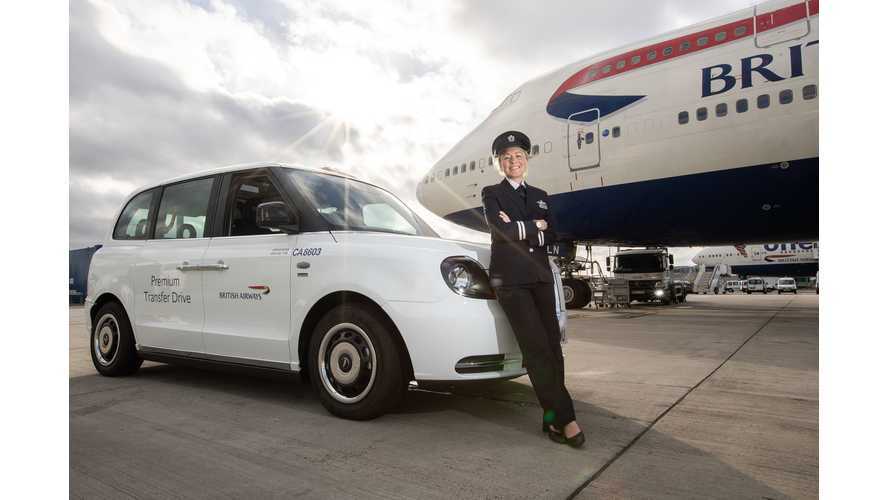 London's taxis found a new job at the airport

British Airways is one of the latest companies in the UK to switch to plug-in electric cars. The choice fell on London Electric Vehicle Company (LEVC) TX taxis, which were included in a fleet of chauffeur-driven executive vehicles.

It's welcoming to see buses and taxis at the airports are being electrified around the world, which enables millions of people to become familiar with electric cars. The TX can go up to around 128 km (80 miles) of all-electric range.

"The taxis will join British Airways’ fleet of chauffeur-driven executive vehicles, to drive premium customers at risk of missing their connecting flight to meet their next aircraft. Customers are met by the driver at the aircraft side and are driven directly to the aircraft side of their onward flight. With every ride completely free of charge, there’s no need for customers to reach for their wallets."

The best example comes from Amsterdam’s Schiphol airport, which has the biggest fleet of 100 or so all-electric buses and three-digit number of Tesla taxis.

LEVC To Introduce TX Taxis In Paris In Early 2019

"British Airways has introduced a brand new and environmentally-friendly electric cab service at its Heathrow home, giving customers the opportunity to experience travelling in a legendary London taxi without leaving the airport.

In addition, customers can expect a smooth ride, air-conditioning and a spacious cabin with room for all of customers’ hand luggage."

"The initiative is part of British Airways’ long-term plan to reduce emissions from all vehicles at Heathrow and follows the introduction of electric aircraft pushback vehicles."

"2019 is British Airways’ Centenary year. The airline is investing £6.5 billion for customers over the next five years, including new aircraft, new cabins, new catering, new lounges, WiFi, and new routes."

“It’s great to see the reaction of customers when they’re met by a London taxi at the side of the aircraft, waiting to take them on to their next flight. They’ve told us how much they appreciate this gesture, plus they love the space in the vehicle for their hand baggage. We’re also really pleased that using new generation electric taxi reduces our carbon footprint.”

“British Airways takes its environment responsibilities seriously and this initiative is part of our overall ambition to reduce carbon emissions and those emissions that impact air quality and our local communities.”

“We’re delighted that British Airways has chosen our electric vehicles to support this innovative new service. We designed the TX eCity with the aim of delighting customers with a more premium experience, and thanks to British Airways even those with the shortest of stays in London can now travel in comfort and style in the world’s most advanced electric taxi.”