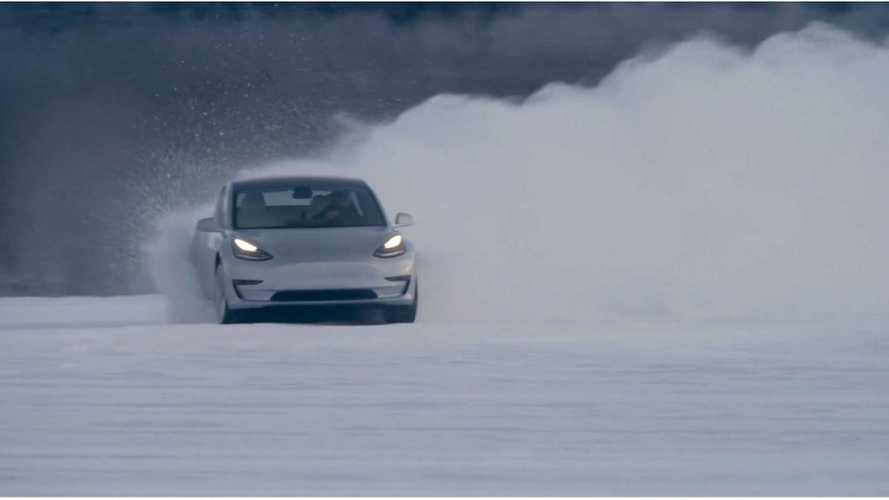 AN INSIDE LOOK AT TESLA’S WINTER TESTING FACILITY IN ALASKA

When it comes to winter driving, electric vehicles have a couple of drawbacks, as CNET writer Tim Stevens, an EV owner who lives in a northern climate, knows from personal experience. Extreme temperatures, hot or cold, tend to have a negative effect on battery packs, reducing range. EVs are also comparatively heavy, and often use low-rolling-resistance all-season tires, which can make them hard to handle on slippery roads. And recently, as the first wave of Model 3s began to weather their first winter, some drivers began to complain about frozen door handles and stuck windows.

Above: Tesla engineers its cars to take on tough winters (Image: Tesla)

Tesla has always been concerned about the wintertime performance of its cars - in 2007, when the Roadster was in the testing phase, the company sent a team to Arvidsjaur, Sweden, above the Arctic Circle, to test the performance of the drivetrain in sub-zero temperatures. Tesla continues to hone its vehicles’ cold-weather performance, as their continued popularity in Norway attests. Nowadays, this takes place at a dedicated testing center in Alaska. Tim Stevens and the CNET team recently got an exclusive chance to visit the secure facility, where they put all three of Tesla’s current production machines through their paces - and it sounds like they had a lot of fun.

Tesla’s cold-weather campus is way out in the wilderness, a two-hour drive from Fairbanks. It’s a sprawling facility centered on a giant asphalt oval. “Tesla engineers have at their disposal groomed snow and ice surfaces, a series of snowy handling courses, iced hills with numerous gradients, plus a skidpad that’s big and slick enough to host a round of the NHL playoffs,” Stevens writes.

Tesla tests handling and safety on a large course with plenty of elevation changes and tricky turns. It also tunes the cars’ HVAC systems here, refining their efficiency in extreme weather conditions.

Stevens obviously got a lot of kicks slipping and sliding in the snow. Of course, Models S and Model X, like all modern cars, feature stability systems designed to keep that sort of dangerous fun to a minimum. “Step out of line, do something the car doesn’t like, and it’ll drastically cut power and do everything necessary to keep you safe.”

But what if you turn the safety systems off? The Tesla test track has a massive snow field, just off the back straight of the oval, where one can easily drive into snow at triple-digit speeds. “With a laptop and a few clicks, one of Tesla’s engineers shut off all the car’s stability systems and invited me to do an emergency lane change at 65 mph, the sort of thing you may have to do in Alaska when encountering a wayward moose.” Stevens, who has a decade of experience driving on ice, just managed to master the maneuver, but “your average Model S owner would have spun every time.”

The Tesla techs re-enabled the car’s stability and traction controls, and he tried it again. “Same speed, same field of snow, and try as I might I couldn’t get the car to spin...the car always kept itself inline, moving quickly enough to miss the imaginary moose, then calmly settling itself.”

Stevens explains that the car does this through a combination of active braking and torque vectoring. “When the car detects a skid, thanks to wheel speed and other sensors, it instantly begins to mitigate those slides by automatically braking individual wheels to pull the nose inline. The car can also modulate the amount of torque at the front and rear axles to maximize grip that way, resulting in a car that, even on 2 inches of loose powder, would not go around.”

Stevens found Model 3 to be a little sportier in the snow than its elder stablemates. “While Model 3 will do much the same tricks to keep you from spinning as Models S and X, its envelope of allowable slip is broader.” Even a base Model 3 “gives you an awful lot of rope to hang yourself with before it kindly and reliably steps in to lift the noose from your neck.”

Above: Tesla's Model 3 ready to take on the ice and snow (Image: InsideEVs)

The Performance version with Track Mode takes things to another level. “In Track Mode, the Model 3 will let you hang the tail way, way out, getting some properly lurid drifts going,” says Stevens. “Yes, it will cut the fun if you get things too far out of shape, killing the car’s power and automatically deploying the brakes at the appropriate corner.”

“On the skidpad and on the tricky handling circuit I rarely felt like the car was preventing me from what I wanted to do, enabling tricky maneuvers like the Scandinavian flick, where you rely on weight transfer across the car to pivot around a tight turn. To do this you need to slide the car in not one but two directions, first away from the turn and then into it. Any hint of stability control would ruin the flow and kill the maneuver, yet lap after lap in the Model 3 it was no problem at all.”

After a day of sliding around on the snow and ice, Stevens was “blown away” by Model 3. “Having this much fun on the ice typically requires the pulling of fuses - or at least a complex series of button presses to disable all the safety systems. The Model 3 is an absolute blast with everything left on.”

And what about those freezing door handles and stuck windows? Tesla quickly addressed the window issue with a software update, and the complaints seem to have died down. Stevens also adds a little perspective by pointing out that his first new car, a 2002 Subaru Impreza WRX, which is renowned for its winter performance, also had door handles that stuck and windows that wouldn’t go down in the cold.