Uniti One Electric Car To Enter Production In 2020 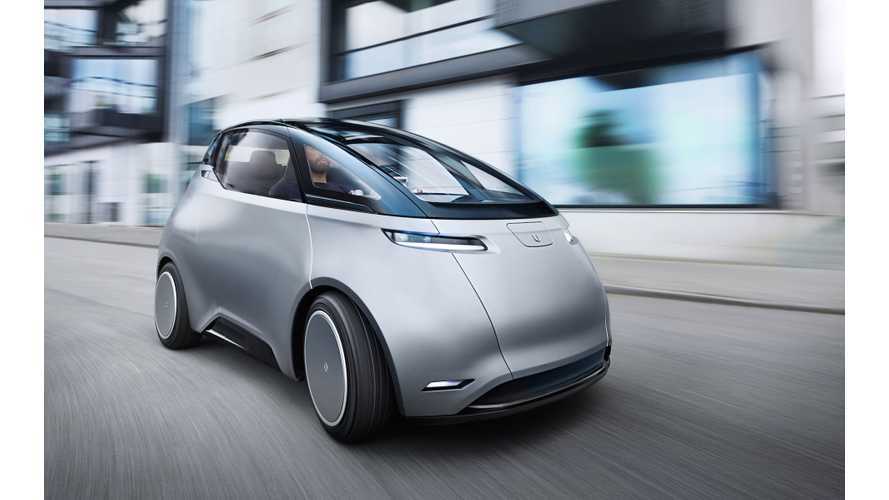 Uniti One - "Designed in Sweden, built for the world"

New company - Uniti Sweden AB - is developing an all-new electric two-seater Uniti One, which reminds us a little of the Commuter Cars - Tango EV from the past (Wiki).

Production is expected to begin in 2020 in a “pilot production plant” at Silverstone Park, UK. The site is expected to serve as a template for franchise production model, with many production sites in various countries. Uniti spreads a vision of 50,000 units produced annually in the future.

Huge New Charging Hub To Be Built In Uk

Nissan LEAF Might Become 10% More Expensive Because Of Brexit

The production model is to be unveiled in late 2019. Deliveries of pre-ordered cars in northern Europe should begin shortly thereafter.

Pre-orders require €149 deposits and according to Autocar, some 3,000 were already placed.

"Uniti plans to unveil its production models in late 2019 and deliver vehicles to pre-order customers throughout northern Europe shortly thereafter. As the UK represents a key market, the Swedish carmaker has recently announced a limited equity crowdfunding campaign through UK-based Crowdcube to give British investors an opportunity to own shares in the company."

Gallery: Uniti One Electric Car To Enter Production In 2020

Uniti Sweden has announced plans to establish an electric vehicle “pilot production plant” at Silverstone Park, the home of the British Grand Prix. The facility will be used to produce the Uniti One electric car, while serving as a blueprint for globally licensed “digital” assembly plants throughout the world. The initiative aligns with the UK’s industrial strategy to lead the world in zero emission and autonomous vehicle technologies. Uniti anticipates this Industry 4.0 pilot facility to be operational by 2020, leading the current trend of automation and data exchange in manufacturing technologies.

“The UK’s approach to vehicle production, with its focus on light-weighting and innovation in advanced materials, is an ideal model for electric car production globally,” says Uniti CEO, Lewis Horne. “It’s no secret that some of the world’s best vehicle engineers are clustered around Silverstone. When coupled with a government receptive to our ambition and goals, we couldn’t find a better home to establish our pilot production facility.”

Uniti has been working with MEPC at Silverstone Park to develop a vision for the pilot plant, with further details to be announced soon. This is the first of several planned initiatives for Uniti to establish itself in the United Kingdom, working towards a goal of becoming a major player in the UK’s EV market over the next few years. To date, the Swedish carmaker has already engaged a team of engineers at an R&D centre in Northamptonshire while fostering partnerships with local companies such as KW Special Projects (Light-Weight Structure and Additive Manufacturing), Danecca (EV Powertrain), and Unipart (Global Supply Chain). Concurrent to Uniti’s engineering activities in Silverstone, the company is setting up an office in London to ensure capital is raised for UK operations on a timescale meaningful to their plans.

“The future of Great Britain is electric and autonomous,” says Sally Povolotsky, Uniti’s Vehicle Development Director. “Through my work with Silverstone Technology Cluster ACES, I can attest this is an exciting time for the UK automotive industry, and one of rapid growth and innovation. Once the Uniti pilot plant facility is fully operational, we can take this blueprint global.“

Uniti plans to unveil its production models in late 2019 and deliver vehicles to pre-order customers throughout northern Europe shortly thereafter. As the UK represents a key market, the Swedish carmaker has recently announced a limited equity crowdfunding campaign through UK-based Crowdcube to give British investors an opportunity to own shares in the company.