Audi e-tron Battery TMS: How Does It Stack Up Against Tesla Model 3?

It looks to us like Porsche will have a tough time keeping Taycan’s battery cool with an approach like Audi e-tron.

Porsche has been advertising some pretty high power charging for their Taycan up to 350 kW and 800 Volts. They are claiming 0-80% charge in 15-20 minutes and in a recent article, Audi is now claiming 0-80% in 12 minutes! That’s a high C rate and lots of heat to get rid of. 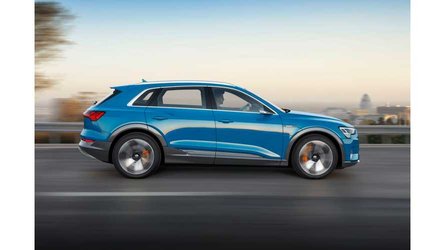 First Look Inside & Out At The Audi e-tron By Autogefühl 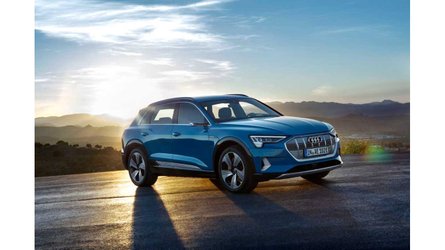 To be fair, Porsche has not released a lot of technical details on their Taycan battery system. However, based on our analysis, they will have a tough time cooling the battery with a system similar to the Audi e-tron.

This pack is built like a tank. First Audi puts 12 cells into an aluminum module (36 total). 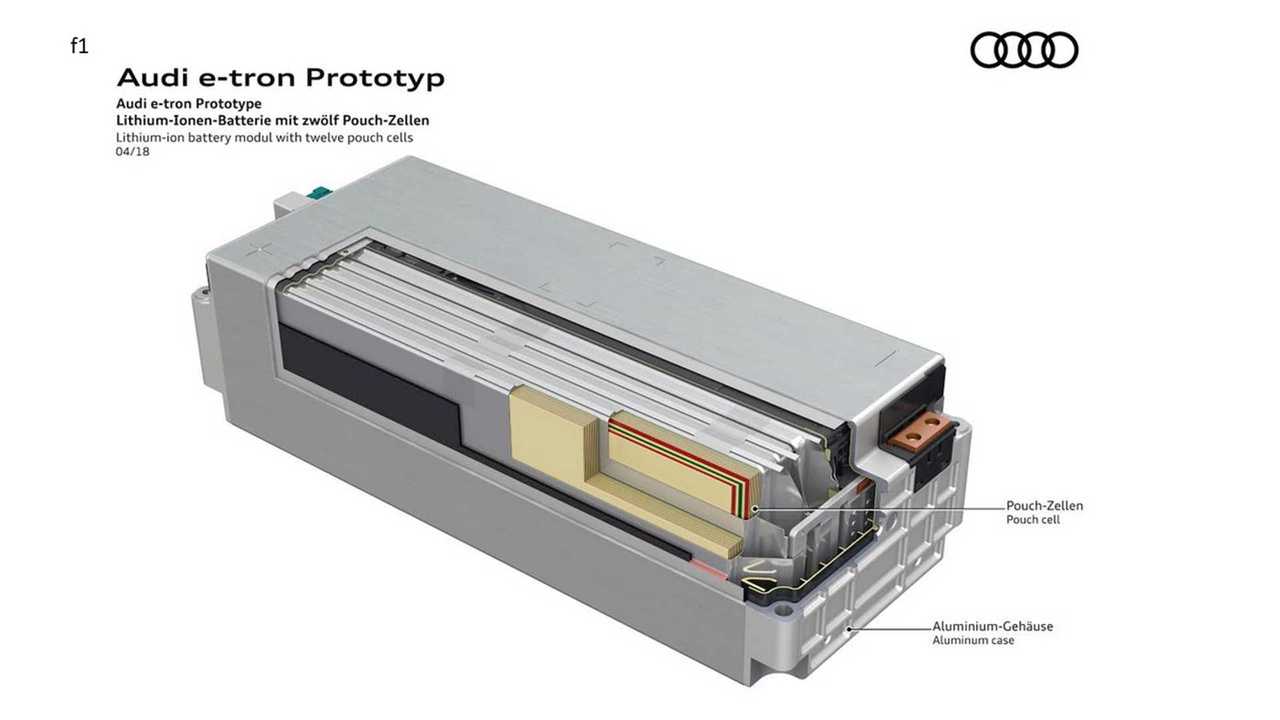 These modules sit inside an internal aluminum crash structure which sits in the housing tray which sits on top of the cooling tubes containing the glycol cooling fluid. The outside of the pack is surrounded by an external crash structure as well. 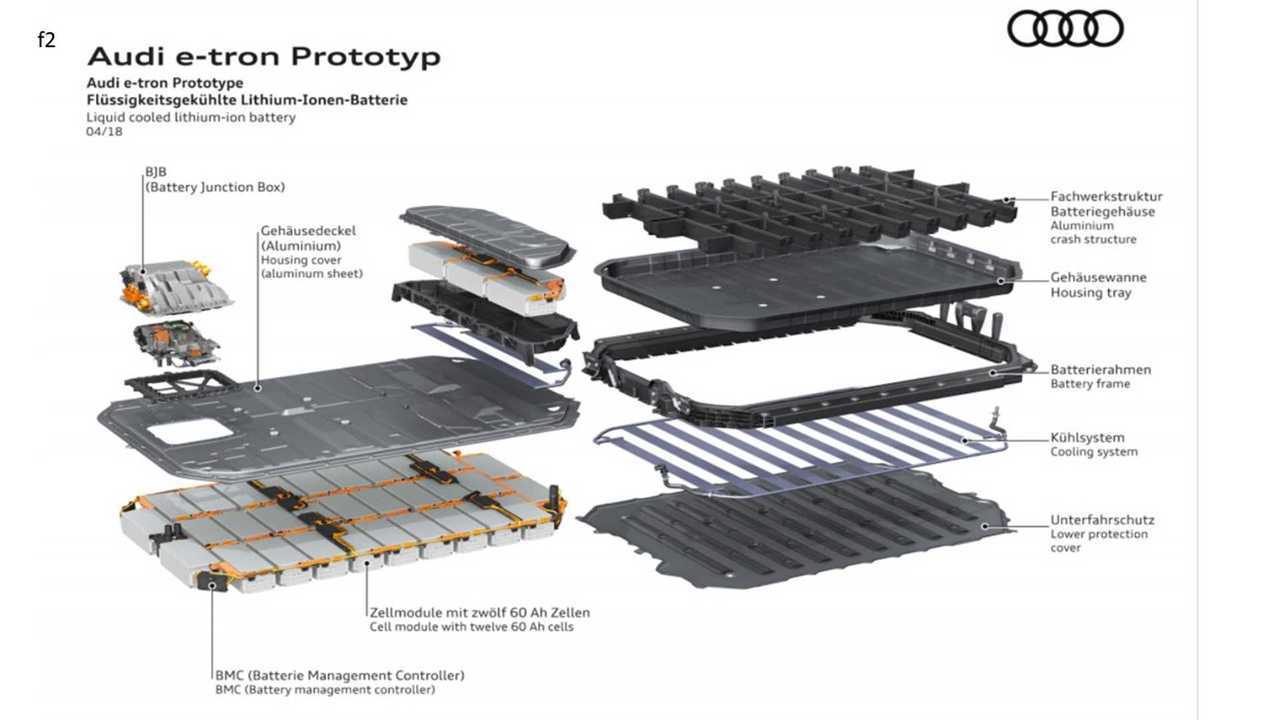 On the other hand, Tesla uses the vehicle body structure as the primary crash resistance (ref).

In the Audi e-tron system, the heat generated in the cells during high power charging must travel thru multiple layers of resistance: There’s the module housing, the tray, and the cooling tubes. On the other hand, Tesla attaches the cooling tube directly to the cell with a highly conductive thermal adhesive. So the heat goes straight from the cell to the cooling tube. It’s fairly obvious why Tesla’s cooling system (described in articles 1 and 2) has superior cooling to this Audi system.

The results of ME systems detailed thermal analysis are presented below. The number is a measure of how much heat the TMS system will transmit. Think of it as the opposite of resistance. The higher the number the more heat the system can pass. If you need to transmit more heat then you must run a higher cell temperature. 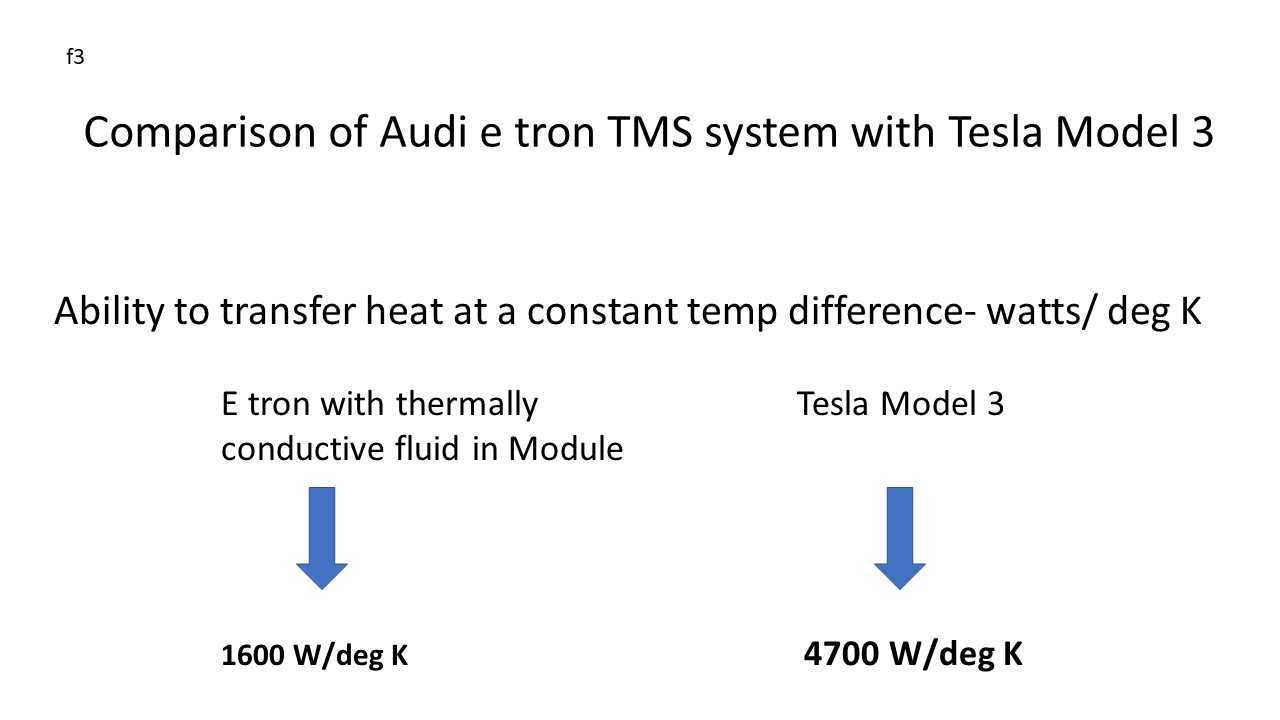 Here’s how ME systems chief engineer Keith Ritter summed it up:

“I have concluded that the Model 3 TMS with glycol-cooled micro-channel snake tubes glued directly to the cells has better heat transfer capacity than any system that uses flat glycol bottom-plates with either passive conductive fins or natural-convective thermal loops. It is just physics and geometry. more effective heat transfer area + better effective U value. So I don't see how Jaguar, Audi, Merc or Porsche can beat Tesla in the charge rate game if pure TMS heat transfer capacity is governing. The only way I can see that Audi (and maybe Porsche) can get away with high charge rates is because they "may" have significant electrode/tab-cooling (if our engineered-fluid scenario is correct) and therefore can let the cells get hotter than other designs. Safely charge despite a lower W/ deg. K”

Implications of these results

What does this mean? What does Porsche/Audi have up their sleeve to cool the battery when charging at 350 kW?

Here’s a list of possible ways we think Porsche/Audi will make the system work.

-First and foremost, it seems obvious that they are relying on some new battery design that has lower internal resistance and an ability to withstand higher temperatures and charging rates. Maybe NMC 811?

We modeled the Taycan 800v pack using the e-tron model as a starting point and ran it at 300 kW. When we did the model, cooling load went from 1.2 tons for e-tron to 4.7 tons due to the increased C rate. The cell temperatures increased 8 degrees C ... despite having doubled the pack voltage to 800V.

-Another conclusion from our modeling is that doubling the pack voltage does not change heat rejection (amperes) within the cells. You might think that at first since the pack voltage is doubled the pack current is half which is true (for the same power). The catch is you are running half the number of cells in parallel and twice the number in series so you just doubled the current through the individual cell after reducing it in half at the pack level, resulting in the same heat rejection (current). The cells don’t see a difference whether they are configured 4P108S or 2P216S. Another way to look at it is at the pack level. When you double the pack voltage you cut the pack current in half but now you have one half the cells in parallel and twice the number in series so your pack resistance went up by a factor of 4. The net result is no change in cell/pack I2R heat loss when we double the pack voltage. The benefit comes in the wiring of the cells and the size of the charging cords (and possibly the inverter loss).

-We are short on details about what is happening inside the modules. We think that Audi may be injecting the modules with some sort of heat transfer gel or liquid that allows them to pull heat from the tabs of the cells. This is called tab cooling and is described in an excellent video by Imperial Mechanical Engineering here. Tab cooling results in a more even distribution of temperature within the cells and allows the cells to withstand higher temperatures. Tab cooling is assumed in figure 3. The benefit is derived because the cells can withstand a higher operating temperature.

Don’t confuse what we are theorizing inside the module with the gel that has been discussed in the media which is between the modules and the cooling tubes. We are talking about a heat transfer media that pulls heat from the cell tabs.

-Design the battery specifically for high charge rates. It’s done all the time but generally, it leads to lower energy density of the cell.

Here’s what Elon Musk said about this last approach:

“The thing about a 350 kW charger is it doesn’t actually make a ton a sense – unless you’ve got a monster battery pack or have like a crazy high C-rate, in which case your energy density is going to be poor.”

How do you readers assess the situation? What do you think the Taycan battery system will look like? Let us know in the comment section.

*This article was a collaboration between the author and our heat transfer engineer Keith Ritter, BSME and owner of ME Systems in Redding, Ca.

Gallery: Audi e-tron Battery TMS: How Does It Stack Up Against Tesla Model 3?

Gallery: Audi e-tron Battery TMS: How Does It Stack Up Against Tesla Model 3?

54 Photos
By: George Bower
++
Got a tip for us? Email: tips@insideevs.com