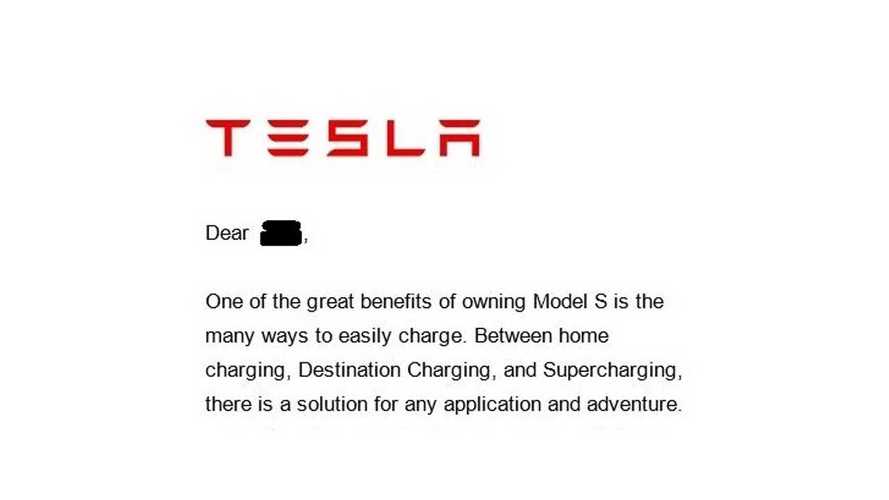 As foreshadowed by Tesla, the company has now sent out Supercharger abuse notes (full copy of email below) to many Model S owners who frequent Supercharging stations a little too much for the company, with the hopes that the notes will ease congestion around popular stations.

Some Owners Not Pleased With Tesla Supercharger Usage Email

The reaction from owners receiving the notes, as expected, has not been overly positive.

With many saying Tesla doesn't understand who they are sending it out to, the circumstances around their usage, and that the tone of the letter itself is unjust.

"The Supercharger Network’s intent remains to expand and enhance your long distance travel while providing the flexibility for occasional needed use during local trips. Our goal is to provide the best charging experience, keeping charge times low to get you back on the road as quickly as possible. As a frequent user of local Superchargers, we ask that you decrease your local Supercharging and promptly move your Model S once charging is complete...."

It appears that instead of slowly delivering out these notes, Tesla has initiated a mass emailing to owners the company has deemed excessive users, which maybe have made the uproar far more greater than it should have been.

Some owners suggest a more gentle (and generic) first wave of emails would have been a better way to broach the subject, especially considering that all Supercharger users have paid a $2,000 fee to use the service (inside the price of the car, or as an after-the-fact purchase with some 60 kWh cars) - without any notice of specific limitations at point of sale.

Since the mailings started yesterday, a current thread on the TeslaMotorsClub forum has been very active on the topic, with several owners who have received notices claiming to have used Supercharging stations very sparingly; in some cases less than 10 times over the past year - while others receiving the email state that they have no local Supercharging stations near them at all.

Tesla in the past has highlighted that Supercharger use is free to use for the life of the car and that customers are able to use the network as much as they like, so owners may be inclined to feel the note (regardless of frequency of use) is still unwarranted.

While some owners will heed Tesla's plea to ease up on public charging for the good of the whole, some likely will be vocally against it - even increasing charging stops.

Overall however, our sense is that most Model S owners will discard the email and continue to use Tesla's Supercharging Network the way they intended since they first bought their cars.

The bigger question is, "how does this stance to Model S owners on Supercharging affect the benefits of the network surrounding the upcoming Model X, Model 3 and future Model S owners?  Will the Supercharging usage terminology on the bill of sale remain the same?"

Will future consumers now see the Supercharging network as a benefit (especially for $2,000) if Tesla is watching over your shoulder and sending you emails ala Big Brother?  And if the root cause of the email is that the network is feeling the strain now, what about in 4 years time when the company says it hopes to sell 500,000 cars a year worldwide?