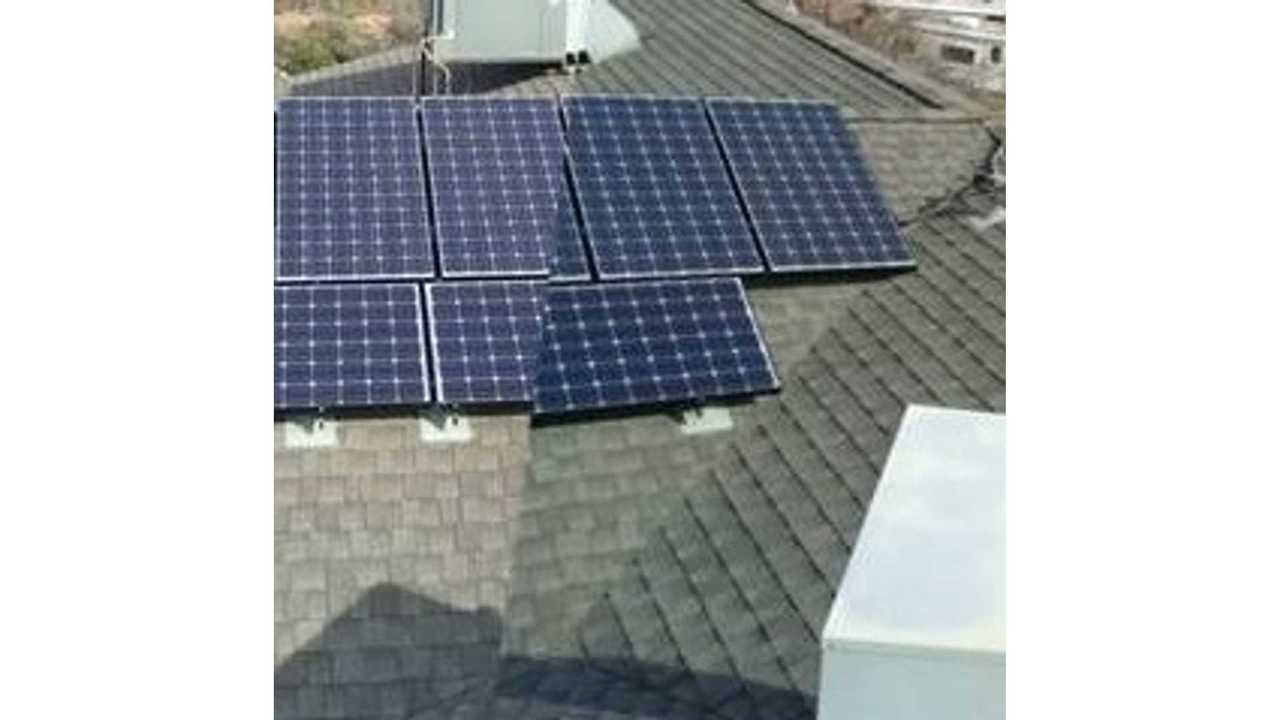 SlideA View To The East

If you have an EV chances are you either already have a Solar array or you are thinking about getting one. Also, if you already have a system you may have one that uses micro inverters (usually Enphase inverters). In a micro inverter type grid tied (GT) system there is an individual inverter under each panel as shown in figure 4.

I've been looking into using some Leaf battery Cells instead of my current deep cycle lead acid batteries. Everything in this article still applies as far as the low cost DC TAP goes. The only thing that changes is I need a different charge controller. But believe it or not the MPPT  terminology applies between both lead acid batteries and Lithium.

Most grid tied system owners are aware that their grid tied inverters shut down when the grid is down.

This is a disturbing situation. When the grid is down is when you need them the most. Sure one could use a portable gen set but what if there is an extended grid outage? Wouldn’t you want your solar system to be available?

The most obvious solution would be to fool the inverters into thinking the grid is up by feeding them a pure sine wave at 220 volts. They would see this sine wave and power back up….problem solved.

The Enphase paper in figure 6 references a MagnaSine inverter that is designed to fool the inverters by creating an AC coupled system that consists of the MagnaSine inverter and a battery bank. The problem is that the inverter alone is $2,500 (USD) and that is not all you need. You also need a critical load panel….and of course the batteries. I already have a small battery bank and inverter system so I’m not that keen on spending $2,500 on an emergency power system that may never get used.

If you have not yet installed a grid tied system you should consider the Outback AC coupled system (or Sunny Boy). These grid tied inverters are not Micro inverters though. You still bring back DC to one central inverter as shown in figure 7.

The problem with the outback solution is it’s expensive. You need additional relays and the critical load panel again for a system that may never be needed. A schematic for the Outback system is shown in figure 8. Hooking your generator into this system is also possible. It uses relays instead of frequency shift to decouple the GT inverter in the case of no critical loads and a full battery.

All these AC coupled solutions have a high price tag. Personally I can’t justify it. I wanted a solution that is low cost. The low cost solution I have come up with is fairly simple. It involves tapping into the DC output of the PV panels upstream of the micro inverters as described in figures 9 and 10.

Since the grid is down, the enphase inverters are shut down and tapping into the DC upstream of them should make no difference. The problem would be if the grid came back up with the DC diverted to the battery charge controller. In order to fail safe this situation the DC shut off (DC disconnect) that will be installed at the end of the DC run will have a padlock. So if the grid goes down and you want to tap into the DC for battery charging, you remove the padlock from the DC disconnect and go to the AC solar Panel disconnect and switch that AC disconnect off and padlock it in the off position.  The main purpose of the emergency DC tap out is to charge batteries. In my particular case I will have 4 deep cycle batteries to be charged so the DC tap out needs to go to a battery charge controller. I also have a DC to AC inverter.

In the process of designing this low cost DC tap out system I was forced to learn some basic wire sizing and charge controller guidelines that I would like to share. The good folks at “Northern Arizona Wind and Sun” helped me with the design. Their website is an excellent place to go for all kinds of info when you are designing a system. I plan to go to them to buy the hardware I will need to finish this project in return for all the time they spent with me.

Here are the guidelines I wanted to share. The first guideline has to do with wire sizing. When sizing your DC run you must use short circuit panel amps times 1.25 as shown in figure 11.

When sizing your battery charge controller you must use open circuit panel voltage times 1.25 as shown in figure 12

Another thing I learned in this design project was that all charge controllers are not created equal. There are 2 basic types: PWM and MPPT chargers. There is a good tutorial at the Northern Arizona Wind and Sun web site but the bottom line is that I need to use an MPPT charge controller. That is because my grid tie solar panels are somewhat of an odd ball voltage as they are specifically designed for grid tied inverters. They are 60 open circuit Volts and most battery systems are 12, 24 or 48 Volts. If you charge a 24 Volt battery pack with a 60 Volt Panel with a PWM type charge controller you are wasting almost half of your Voltage. In order to use a PWM charge controller you need to match your battery voltage to your panel voltage.

As I mentioned earlier I plan to use 4 deep cycle batteries at 24 Volts. That will give me 4 kwh of storage as shown in figure 14.

Your reaction may be that 4 kwh isn’t enough. I also have a Honda eu2000i generator that is very fuel efficient because it is variable speed. I am currently modifying it for tri fuel capability. I have a 250 gallon propane tank that is used for heating so the plan is to tap into that tank for another source of emergency power.

The low cost DC wire tap system is not finished yet. A few things still to do before installing it as shown in figure 15. When it is finished I’ll publish another article.