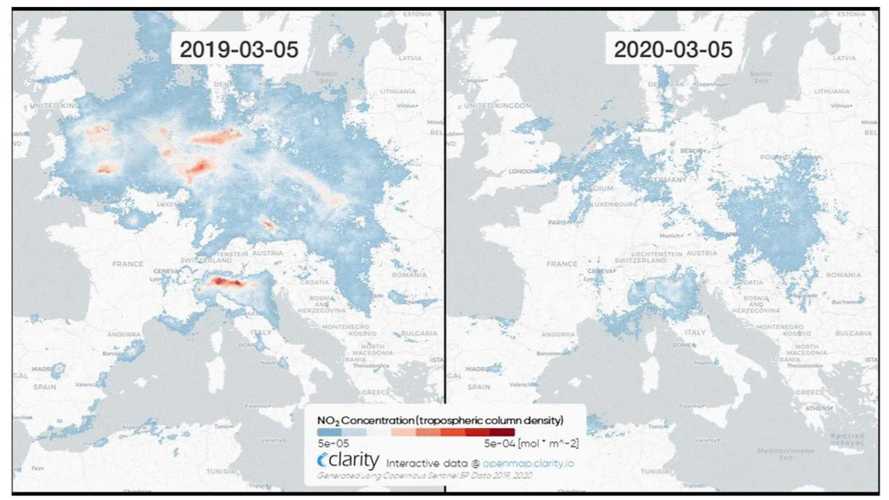 If you want to see how cities without combustion-engined vehicles would be, now you know.

Some friends of mine have said that, if the world gets back to where it was before the COVID-19 pandemic, we will have failed. They believe this is a great opportunity to change for the better. I agree.

COVID-19 has shown that a problem affecting a distant country may not be only theirs anymore: It can be everyone's. Paradoxically, the situation is collective, but the solution is individual. It depends on what each of us decides to do. When decisions are shared, the world changes. Even if as a side effect, the cut in pollution levels shows that. Just make no mistake: The COVID-19 landscape is not a world without cars. It is a world without oil.

Some environmentalists see the pictures presented by articles and a Sam Mitchell video as proof that cars are the Darth Vader to Mother Nature, the Death Star to planet Earth. And they could not be more wrong.

More realistic points of view saw that as what the world would become if all vehicles were electric. And they have a good point. The only problem is that it would imply industries and businesses which are now idle would also have given up on oil altogether. With them working, the pictures would be a lot different – and less impressive.

Check these ones made in India, where some people reportedly are able to see the Himalayas again after 30 years. Although India has many registered vehicles – 253,311.000 in the most up to date statistics, from 2017 – most of them are motorcycles (187,091,000). That leaves us with a little more than 66 million cars, buses, and trucks.

If you mention only passenger vehicles, the US has more than 260 million of them. In other words, cars were not the only villain hiding the most majestic mountains in the world. There are way more causes for smog than some may want you to believe.

If the dreams of environmental extremists and most architects came true, you would probably only be able to travel by bus or by train. In the best-case scenario, you would get to ride a bicycle. Think about buses and trains in these novel coronavirus times, especially the crowded ones. They are inviting COVID-19 nests. Cars are currently the safest transportation means available, especially the ones with Bioweapon Defense mode – if you wash your hands properly, at least.

What COVID-19 gave us was a glimpse of a future without burning gas, diesel, and other oil byproducts. Whether in cars or in anything else that currently needs such a commodity. Don’t buy that lie that EVs can be dirtier than ICE-powered vehicles – that is always proven to be a fallacy. Electric is the way to go. In order for that to happen, we need to make the right choices.

When we were told to stay at home, most understood that attitude was the right thing to do. Not because the government asked, but rather due to the pandemic characteristics. People with COVID-19 can remain without symptoms for many days. In those periods, they are spreading the virus everywhere they go. This is why factories and businesses had to close: you could not know for sure if the person working beside you had the novel coronavirus or not. If we did, we would have avoided most cases and deaths already.

While some countries still discuss whether there should be a lockdown order or not, we see people that do not respect social distancing recommendations even in countries under a state of emergency. Who use masks in a way that does not protect them or discard used gloves in the middle of the streets. These are the ones that can make the pandemic worse, regardless of what the government tells them to do.

Choice also applies to transportation. Governments can give people incentives for buying an electric car. They can encourage charging networks to create a more robust infrastructure. But none of that will help if people prefer to stick with combustion-engined vehicles. Volkswagen even said recently that they will have a future burning renewable or synthetic fuel. With increasingly lower oil prices due to less demand, that danger is even higher.

If some countries are engaged in promoting EVs, such as Norway, others go in another direction, such as the US. EPA has recently rolled back Clean Car Standards with the excuse that this move will help reduce pollution and save carmakers in COVID-19 times. We have already said what we think about that.

Ironically, Norway makes most of its GDP from selling oil, which has reached its lowest value in years, as we already mentioned. How is the country dealing with the decline in demand? We’re not sure, but we know Saudi Arabia and other big producers will have to cut production and ask its biggest clients to store unwanted oil while the machines that need it are not back to work.

When they are, governments will do whatever they can to preserve jobs in the automotive industry. They will probably cut emission standards, make combustion-engined cars cheaper, promote a new cash for clunkers program and so forth. What will the role of electric cars be when the economy resumes? Without individual choices, it tends to be very little.

The truth is the world must go electric. That is the only sustainable way to progress. Bill Gates already said that and he even proposed a way out: nuclear energy. Not the one that gave us Chernobyl and Fukushima, but one that uses what these power plants despise to generate loads of energy. It even has a name: TerraPower. We’ll write an article about these guys whenever that is possible.

How could we do that with buses, trucks, ships, trains, and airplanes? Many of them already present battery applications, such as the eDumper mining truck and the E-Ferry Ellen.

Anyway, large vehicles present much more potential to go electric with fuel cells and hydrogen than with batteries, at least with their current Li-ion technology. It is a matter of getting energy as fast as possible without weight restrictions. There are great expectations about solid-state batteries, but even the ones presented by the father of the current ones are not free from skepticism.

With batteries or fuel cells, these dark times offer us the opportunity of a brand-new start in many senses, regardless of what governments tell you what to do or not. We can preserve the clear pictures of the Himalayas and all other places with whatever "electric" we can put to work. At least if each of us decides to do the right thing, as most of us did when facing the COVID-19. Let's just choose wisely.