Deliveries increased by 40 percent year-over-year in 2022.

The fourth quarter of 2022 was another record-rich period for Tesla, although the rate of expansion slowed down recently.

In this post, we will take a look at the numbers and charts to visualize the progress and to better understand what is happening and what to expect in the near future.

Let's get into the details.

In Q4, Tesla increased its overall global electric car production by around 44 percent year-over-year to 439,701, which is a new all-time quarterly record.

The total global sales (customer deliveries) amounted to 405,278 (up 31 percent year-over-year). That's also a new quarterly record, but the rate of growth is not as high as one might wish. Another thing to note is that the production noticeably exceeded deliveries - by 34,423 units. Tesla explains that currently, its new approach results in a higher number of vehicles in transit:

"We continued to transition towards a more even regional mix of vehicle builds which again led to a further increase in cars in transit at the end of the quarter."

An interesting detail is that the Model S/Model X result is actually slightly lower than in Q3 (18,672). That suggests it's high time to start high-volume deliveries in Europe (it recently happened) and in Asia.

Both numbers are new annual records for the manufacturer, although the rate of growth is lower than the target 50 percent of average annual growth over the multi-year horizon. In other words, other years would have to be better (above 50%) to achieve such an average.

By the way, the difference between the two numbers (production and deliveries) is 55,760 units. Troy Teslike estimates that Tesla's inventory at the end of the year might be around 71,000 cars or 13 days of supply.

None of the numbers include the Tesla Semi electric truck, although a few were delivered in December.

Production and deliveries of the Model 3/Model Y cars were at a record high in 2022, reaching an unprecedented level of more than 1 million units (actually 1,298,434 produced and 1,247,146 delivered). Those are levels unheard of in the BEV industry.

In the case of the Model S/Model X, the results appear reasonable for a ramp-up of the refreshed versions of Tesla's flagships. Only in the best years (2016-2018) the company was able to sell significantly more (76,285-101,417). We guess that there is a potential to get into this range in 2023. 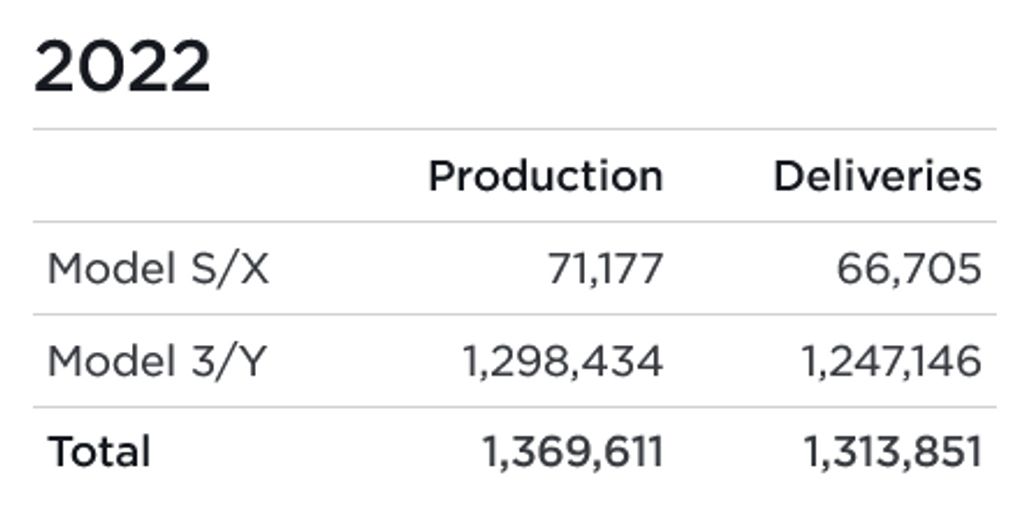 A quick look at the cumulative results: Model S/Model X reached 600,000, while the Model 3/Model Y are above 3.0 million.

During the past four quarters, Tesla produced and delivered more than 1.3 million electric cars. Cumulatively, more than 3.6 million Tesla cars were delivered.

Some of us expected that the year 2022 would be even better for Tesla, but considering various challenges around the world, we can't really complain.

There is a lot going on right now, including decreasing Tesla's estimated global electric car order backlog. Only time will tell whether Tesla will be able to get noticeably closer to 2 million units per year (about a 50 percent increase versus 2022) in 2023.