There's also a fresh photo on Chevrolet.com that shows the side profile of the compact electric SUV in base LT trim.

Shortly after the unveiling of the 2024 Blazer EV on July 18, Chevrolet has updated its customer website by adding a product page for its other upcoming electric SUV, the 2024 Equinox EV.

Our colleagues from Motor1.com discovered the Equinox EV page in the "Upcoming" section of the website, where the Equinox EV is pictured next to the 2024 Blazer EV and 2023 Blazer (the ICE model).

The side profile photo of the 2024 Equinox EV in base LT trim appears to be new as we haven't spotted it in the teaser images released so far. From this angle, we get a good look at the SUV's decent ground clearance and pop-out door handles, a feature the larger and more expensive Blazer EV doesn't have.

The compact electric SUV is shown in a metallic blue body color with a white roof and mirror caps, a combination we've seen in a March 2022 teaser video. So far, Chevrolet has shown renderings of the Equinox EV LT in silver and of the sporty Equinox EV RS in red with a black roof. This new color combination suggests customers will have plenty of youthful exterior design options to choose from. 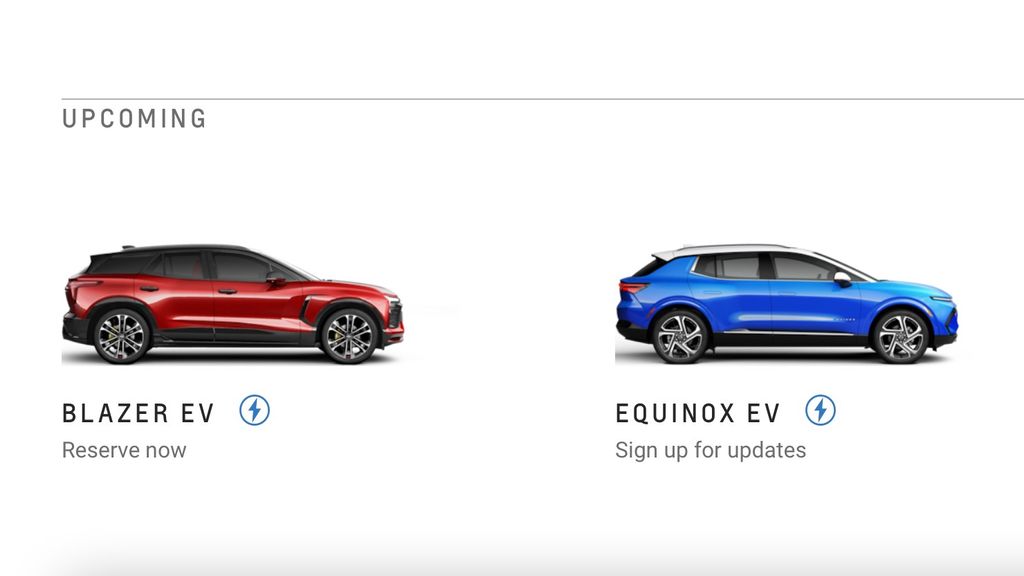 Seen next to the Chevrolet Blazer EV, the Equinox EV's side profile looks similar, although the smaller model has a chunky C-pillar instead of a third side window like the midsize SUV.

The Equinox EV will share the EV-only Ultium Platform with the Blazer EV, but GM hasn't disclosed any specifications yet. However, one image from the first batch of teasers released in January suggested a driving range of more than 300 miles (483 kilometers) as it showed the instrument cluster indicating some 235 miles (378 kilometers) of range at about 75% state of charge.

GM has also announced a starting MSRP of around $30,000 for the Equinox EV and described it as "an affordable, functional compact SUV." Since the midsize Blazer EV will start at around $45,000, the Equinox EV has huge sales potential as a truly mainstream offering in the automaker's EV lineup.

General Motors CEO Mary Barra said during the company's Q1 2022 earnings call that the compact electric SUV would be unveiled in early fall 2022 before going on sale in fall 2023. The Equinox EV will be available initially in RS trim, with the entry-level LT grade arriving later, likely in 2024; the LT and RS will be the only trim levels on offer.