Bloomberg changed its mind and put the Lucid Air in front of the Model 3 in this year's "Bloomberg Green's Electric Car Ratings."

UPDATE: Bloomberg has updated its list of America's greenest EVs of 2022, putting the Lucid Air in front of the Tesla Model 3. From what we can gather, the change is due to the fact that Bloomberg has replaced the specs of the Dream Edition Performance model with those of the Dream Edition Range. The latter obviously has a higher EPA range of 520 miles. We've updated the title, parts of the article and charts to reflect the change. For reference, we kept the original Top 10 ranking (you can check it out at the bottom of the page).

The Lucid Air is followed by the Model 3 Long Range in second place and Tesla Model S in third. Remarkably, Tesla has all its models in the Top 10, with the Model Y ranking 5th and the Model X taking 10th place.

The ranking, which includes a total of 34 electric vehicles, is established based on a Green rating for each model. The score is based on how efficiently the cars travel once on the road and the resources needed to manufacture the batteries in those cars. 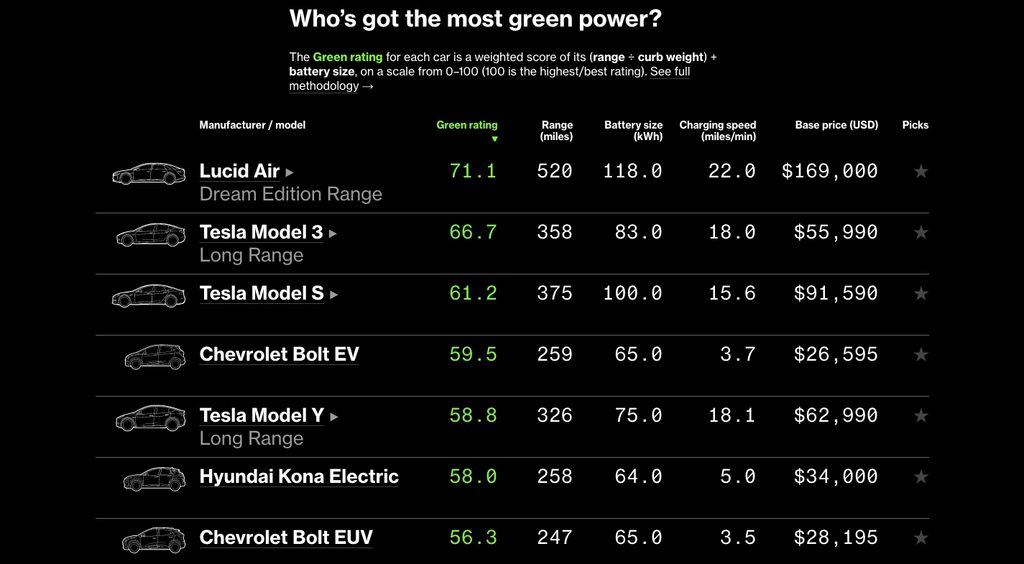 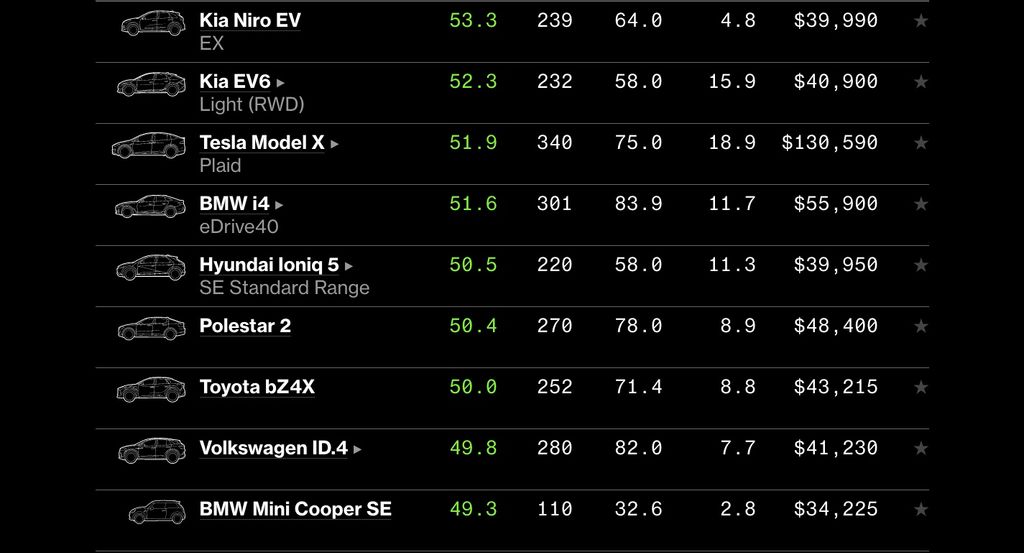 More specifically, the Green rating for each car is a weighted score of its range divided by curb weight plus battery size, on a scale from 0 to 100 (100 being the best rating). The efficiency makes up 70% of the score, while battery size makes up 30%. Here's how Bloomberg explains the methodology of calculating the scores.

We arrived at a "Green" model based on two metrics: driving economy, which captures just how well a car uses its resources to get down the road, and battery size, which serves as a proxy for the carbon cost of actually making the vehicle. The former accounts for 70% of the score, while the latter makes up 30%. Our model doesn't directly account for the carbon cost of actually bolting together the parts and panels of a vehicle.

Based on this methodology, the Lucid Air Dream Edition Range has a Green rating of 71.1 while the Tesla Model 3 Long Range scores 66.7, followed by the Tesla Model S with 61.2. Interestingly, the Lucid won despite having one of the biggest batteries in the ranking, with a usable capacity of 118 kWh; the Air's battery capacity is only topped by the Rivian R1S and R1T (129 kWh) and GMC Hummer EV (205 kWh) in this ranking.

The Lucid Air does compensate with the highest EPA range of all the vehicles in the list (520 miles for the Dream Edition Range) and the highest charging speed (22.0 miles per minute).