The Model X ranked first in iSeeCars.com's study, with an average 28.0 days to sell and a whopping average price of $90,406.

It’s not exactly a secret that electrified vehicles are in high demand in the United States, whether we’re talking about new or used cars. Actually, one could argue that customers are particularly drawn to used EVs as delivery times for brand-new ones are really long and gas prices are skyrocketing.

Car search engine iSeeCars.com has released a study that looks at the fastest-selling new and used cars in the US market in March 2022, and the results are pretty telling. Since customers have to wait many months to take delivery of a new EV, there's not a single electric vehicle in the top 20 fastest-selling new vehicles in March 2022, although the list does include several hybrids.

However, once we get to the top 20 fastest-selling used vehicles in March 2022, no fewer than five all-electric vehicles made the cut, including four Tesla models. All five EVs made the top 10, with the top 20 list also including eight hybrids.

The fastest-selling used vehicle last month on iSeeCars.com was the Tesla Model X, with an average 28.0 days to sell and an average price of $90,406. That's way below the 52.9 days an average used car takes to sell, although the electric crossover's average price is almost three times higher than the $35,297 average for all used vehicles in the study.

"The earliest delivery time for a new Tesla Model X is December 2022 for the base model and August 2022 for the high-performance Plaid version, which is further elevating the demand for the used versions. All Tesla vehicles have long waitlists for their new versions, and used versions of the highly-anticipated Tesla Model Y are just entering the used car marketplace."

The tenth place went to the Ford Mustang Mach-E with 35.1 days to sell and an average price of $58,984. The electric crossover has been in high demand since debuting in 2021 and Ford recently stopped taking orders from retail customers for new versions of the Mach-E after wait times exceeded 32 weeks. Needless to say, this is causing a surge in demand for used Mach-Es.

The study was compiled by analyzing over 150,000 new and used car sales from March 2022, with the used cars including model years 2016-2020. The number of days that each car was listed for sale on iSeeCars.com was aggregated at the model level, and the average days on market for each was mathematically modeled. 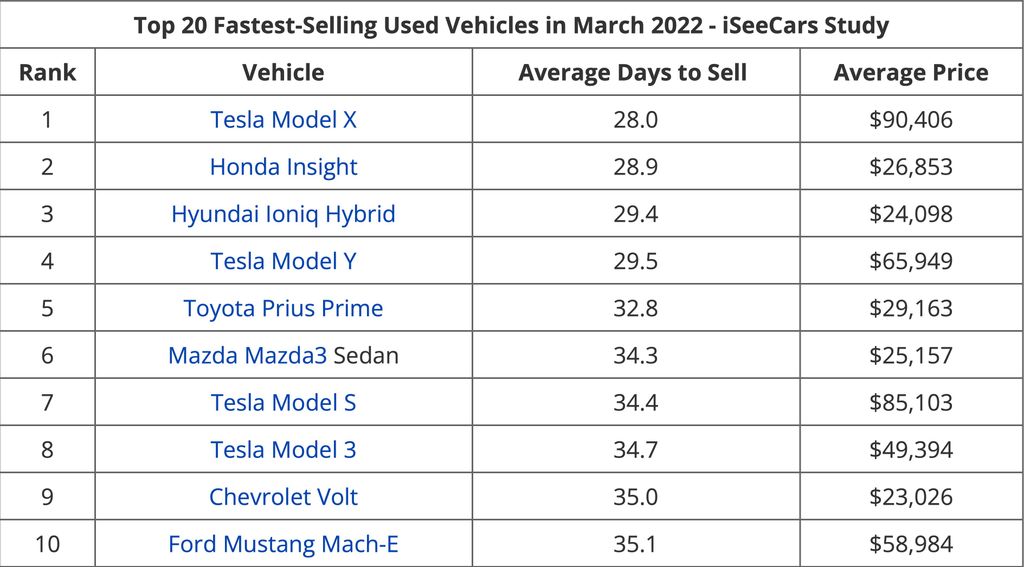