Volkswagen has recently announced its plan to increase the possible achievable range of its MEB platform to 700 km or 435 miles. This will likely impact upcoming models that have not yet been launched, but it could also increase the range of its existing models, either as a standalone upgrade, or as part of a future facelift for the likes of the ID.3, ID.4 and ID.5, as well as the new ID Buzz.

In the chart released by VW showing its portfolio of MEB-based EVs, the ID Life and the Aero B are listed as models that are expected to arrive by 2025. We don’t think the cheap ID Life, which by the way is being redesigned for production, will come anywhere near achieving 435 miles on one charge, but the larger Aero B probably will, as will the upcoming long-wheelbase version of the ID Buzz for the US market.

Keep in mind that the claimed range number is calculated according to the WLTP test cycle, so in the United States, the number according to the EPA will surely be lower. Maybe around 350 miles EPA seems like a believable estimate. 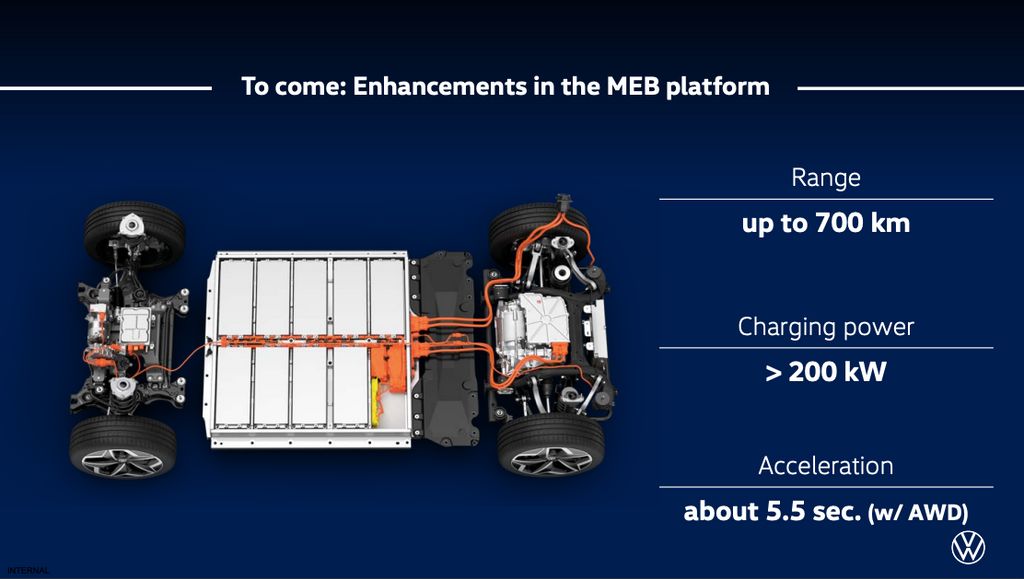 The manufacturer also announced that it would increase the charging speed of its MEB-underpinned EVs to over 200 kW. Currently, the quickest charging speed for the MEB platform is 125 kW, so in other words, VW intends to double it.

Improved performance is also on the agenda, and VW wants to drop the sprint time to 100 km/h (62 mph) of its quickest all-wheel drive MEB EVs to under 5.5 seconds. Currently, the VW ID.5 GTX with 299 horsepower does the benchmark acceleration run in 6.2 seconds, so we presume that the power output may be upped to around 350 horsepower in order to drop 0.7 seconds.

The MEB platform is one of the first of its kind, dedicated for electric vehicles, and Volkswagen began development in 2015. The first production vehicle to be underpinned by it was the Volkswgen ID.3 and now there are now nine different models that use it, not only from VW, but also from Skoda, SEAT and Audi.