Earlier versions of the three-wheeler solar EV had a more conventional steering wheel, but now the yoke is confirmed.

Aptera launched a video a few days ago to announce how far along it is in the process of starting production, since the company has pledged to begin delivering vehicles to customers before the end of this year. However, in the same video, Aptera’s chief of design, Jason Hill, announced that the three-wheeler EV would get a half-wheel, basically a yoke like the one Tesla equips its Model S and Model X with.

This video is our best look at what will probably become the Aptera’s production interior. The company has decided to add a driver’s display, in order to compliment the large central infotainment screen - this smaller display appears to show the feed from exterior a pair of rear-facing cameras; speed and other pieces of information are still currently displayed on the central screen.

Regarding the yoke, Aptera seems to think that the use of the yoke is more efficient than a traditional wheel and that it results in a better user experience. Hill’s words make it sound as if it’s a superior solution (which we still argue it is not), but it does allow a completely unobstructed view of the driver’s display. 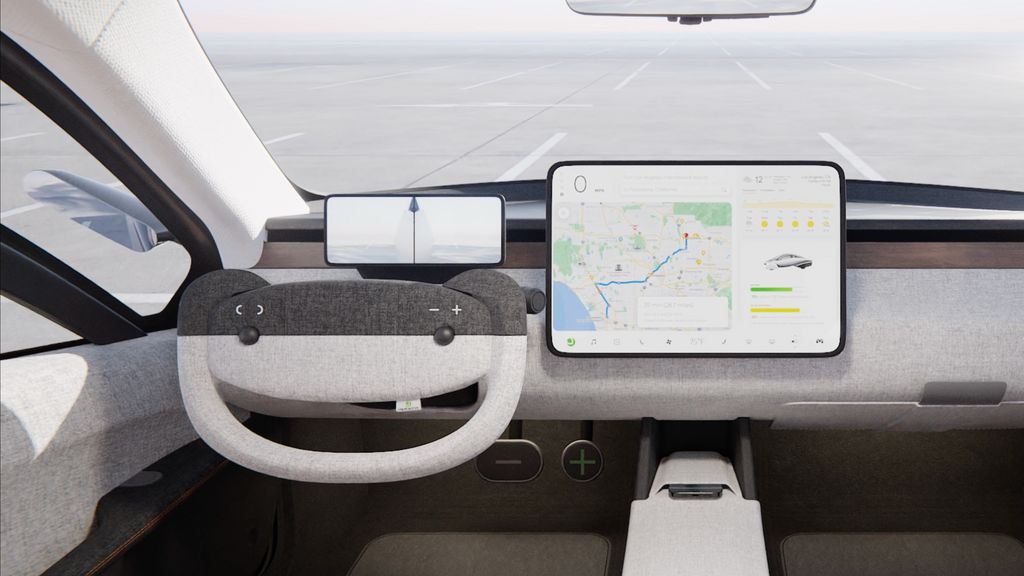 However, neither the design of the interior or the steering device is final, so even if the decision has been made now to go with this solution, it will still change for the final design, which is expected to be shown this summer. The images released by Aptera show the basic layout of the interior, which they will probably tweak in order to get the ergonomics just right.

The Aptera three-wheeler solar EV will go into production in the second half of the year, it will cost between $25,000 and $46,000 depending on version and in its longest-range guise, it promises to allow for over 1,000 miles (1,609 km) on a single charge of its (relatively small) battery pack. It has a solar charging component that really makes it a unique vehicle on the market, if the futuristic three-wheeler design hadn't already achieved that on its own.