Tesla Spends Least On Ads, Most On R&D: Report

Since Tesla doesn't advertise in the traditional sense, it can use the money to focus on improving its vehicles and planning ahead.

According to a new report by StockApps.com, which was discovered and shared by Electrek, Tesla is one of the only global automakers that says it doesn't advertise. Some would argue Tesla advertises every day in some way or another, though it doesn't have a marketing budget, it doesn't make commercials, and it certainly doesn't need to advertise.

Demand for Tesla's vehicles has been growing so quickly, advertising would potentially work to make delivery delays even longer. Sure, CEO Elon Musk takes to Twitter every day and gets people's attention, which puts Tesla in the media spotlight on a constant basis. Whether the news is seen as negative or positive, it still draws attention to the brand. Meanwhile, Tesla fans, owners, and investors are constantly "advertising" for the company on social media and in online forums.

Based on the Stock Apps report, Tesla has never spent a penny on actual advertising. Instead, the US EV company steers the extra money toward Research and Development (R&D). Tesla's vehicles are constantly evolving, and they don't rely on traditional model years, refreshes, or redesigns. Rather, Tesla updates its cars' hardware, software, battery tech, features, and more, whenever it sees fit. It also has the unique ability to instantly change pricing to take inflation or supply chain issues into account, or because it added, updated, or removed various features.

Take the dollar amount with a grain of salt here since we have no way of knowing for sure, but the publication claims that Tesla spends $2,984 per car on R&D (and we've seen this figure shared around by various publications many times in the past). As you can see, that's three times the industry average. It's also higher than Chrysler, Ford, and GM's R&D budgets combined. However, going forward, as these companies push to become EV leaders, their future R&D budgets are likely to grow. 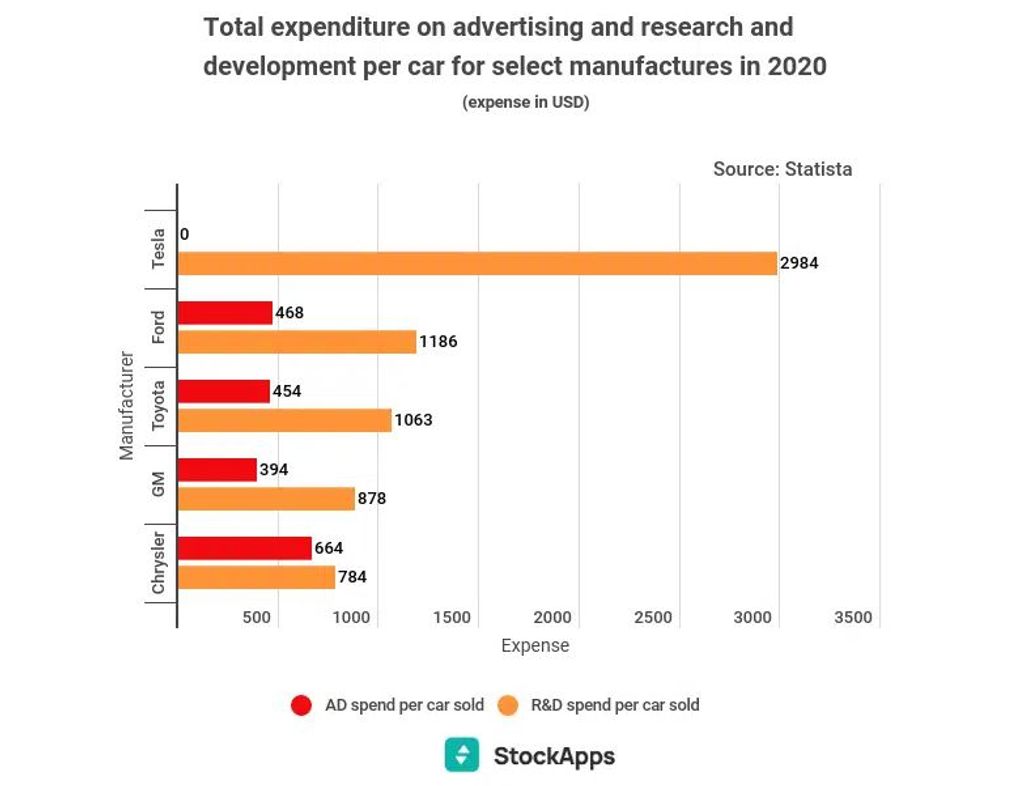 Tesla's emphasis on R&D seems to be making a difference. It's the global leader when it comes to EVs, and it has been for years. In addition, the US EV brand has made impressive strides when it comes to safety, performance, efficiency, and cutting-edge technology features. StockApp’s Edith Reads shared:

"Tesla spends more than any other carmaker on R&D in order to maintain its lead in EV technology. And if you ask them about it, they’ll tell you this is the key to keeping their customers happy—which is what keeps them in business.”

How Is Tesla's 'R&D Over Advertising' Investment Playing Out?
Is Tesla Spending $100,000 A Day On A Huge Times Square Ad Spot?

How do you think this will all play out as legacy automakers bring an increasing number of compelling EVs to market? Leave us your thoughts in the comment section below. And, with that, we'll leave you with a Tesla ad the company didn't have to pay for.