Ford Sold 2,370 Mustang Mach-Es In The US Last Month

Not the best month to date (February 2021 saw 3,739 sales) but good enough for the Mach-E to rank second only to the Tesla Model Y.

Ford has announced its January 2022 sales results for the US market and there's good news for the Mustang Mach-E and the automaker’s hybrid models.

Overall, the Ford brand sold 137,791 new vehicles in January, roughly 10% of which were electrified. Ford notes that its electrified vehicle sales in January grew almost four times faster than the overall electrified segment.

That said, January 2022 was far from the Mach-E's best monthly performance; in February 2021, the model's first full month on the market, 3,739 units were sold. Ford also notes that a Mustang Mach-E spends an average of just 14 days on dealer lots before being purchased.

As for hybrid vehicle sales, Ford did not reveal detailed numbers except for the Maverick, which saw 3,549 hybrid units sold out of a total of 6,513 units.

"Ford market share increased over a year ago on strong demand for our newest products such as Bronco, Maverick and Mach-E. Ford took in a record 90,000 new vehicle orders in January. Vehicles are turning at a record pace on dealer lots, as we work to fill these orders. This year represents a turning point for Ford in electrified vehicles, as our electrified portfolio grew at nearly four times the rate of the industry segment, with E-Transit and F-150 Lightning set to hit the market."

Ford already has more than 200,000 reservations for the F-150 Lightning, which will start deliveries this spring, and 10,000 orders for the E-Transit. 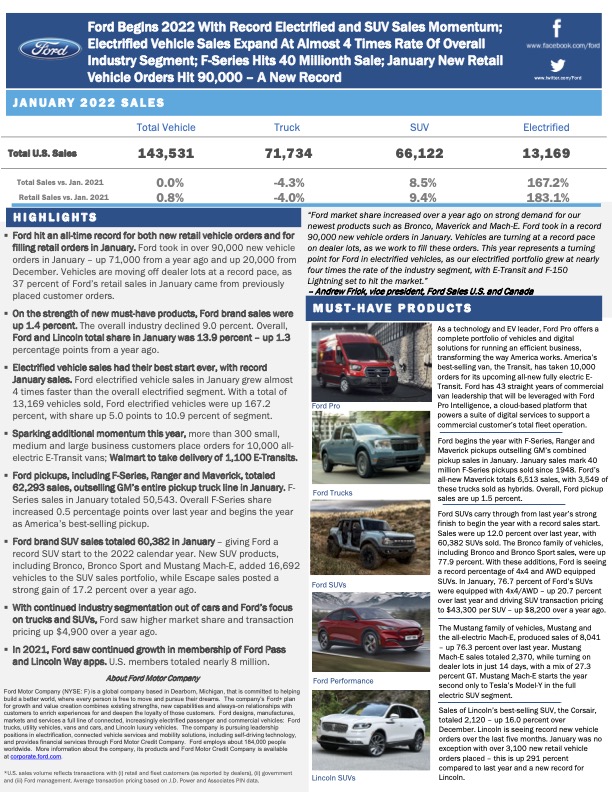 Watch these videos with the Ford Mustang Mach-E