US: Tesla Model 3 Continues To Be The Fastest-Selling Used Car

It's been on the top for four consecutive months with the lowest average days to sell.

A huge disproportion between demand and supply of Tesla cars translates to frequent price increases and longer estimated delivery times of new cars. But how about the used Teslas?

According to the iSeeCars' report for the month of Septmeber, the Tesla Model 3 was the fastest-selling used car for the fourth consecutive month in the U.S.

The data indicates that the average number of days to sell a Model 3 was just 16.0 - significantly quicker than the industry average of 32.8 days (22.4 days in the case of the top 20 models).

“The Tesla Model 3 has remained popular since its highly anticipated debut, thanks to impressive technology and performance at a relatively affordable price compared to Tesla’s earlier vehicles. A new version of the Model 3’s Standard Range Plus variant is sold out for the remainder of 2021 to further add to the already-high demand for used versions, some of which are being sold at higher prices than new versions .” 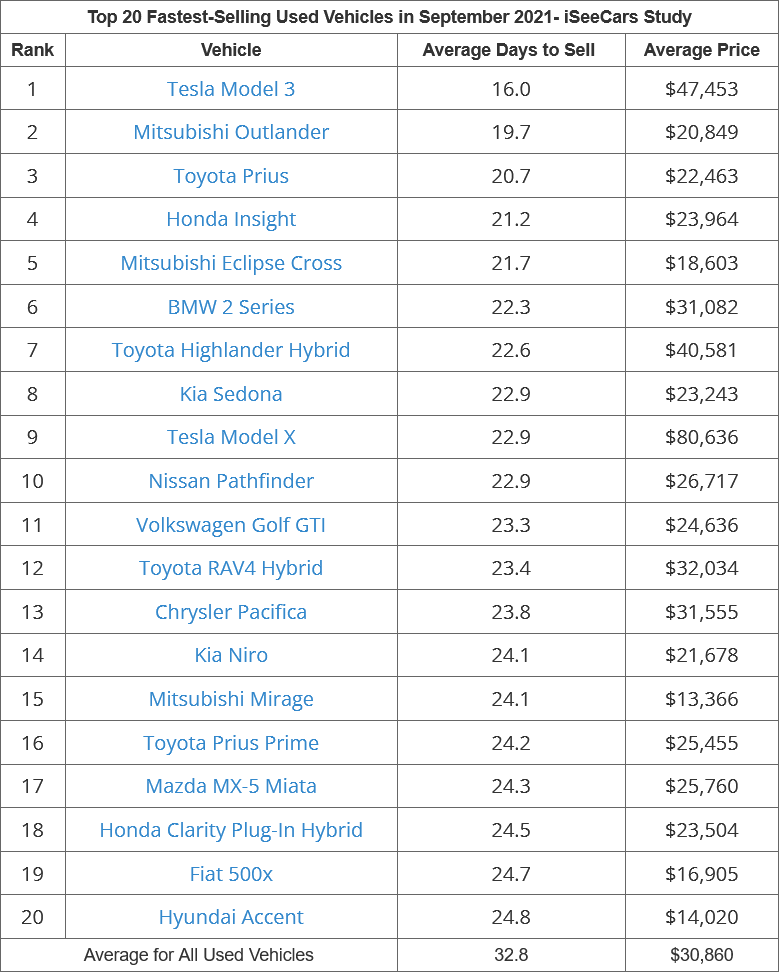 Overall, the car market is significantly affected by the chip shortage, which caused production constraints. Customers who need to buy a car are often forced to seek used vehicles and it is reflected in the stats.

New cars are also selling quickly. The Toyota RAV4 Prime is one of the top-selling new cars with 11.0 average days to sell and an average price of $45,038.

China: MIC Tesla Sales Surge To New Record In September 2021
Tesla Production And Deliveries Graphed Through Q3 2021
++
Comment!
Got a tip for us? Email: tips@insideevs.com