The Lucid Air luxury sedan recently received official EPA range ratings with up to 520 miles (837 km) on a single charge. In this post, we will take a look at all of the range and efficiency numbers provided by the EPA.

Three versions of the Lucid Air were described - Dream Edition Range, Dream Edition Performance and Grand Touring - each with 19" and 21" wheels, which allows us to see not only the differences between the versions, but also between the wheel options (the company offers 19", 20" and 21"). 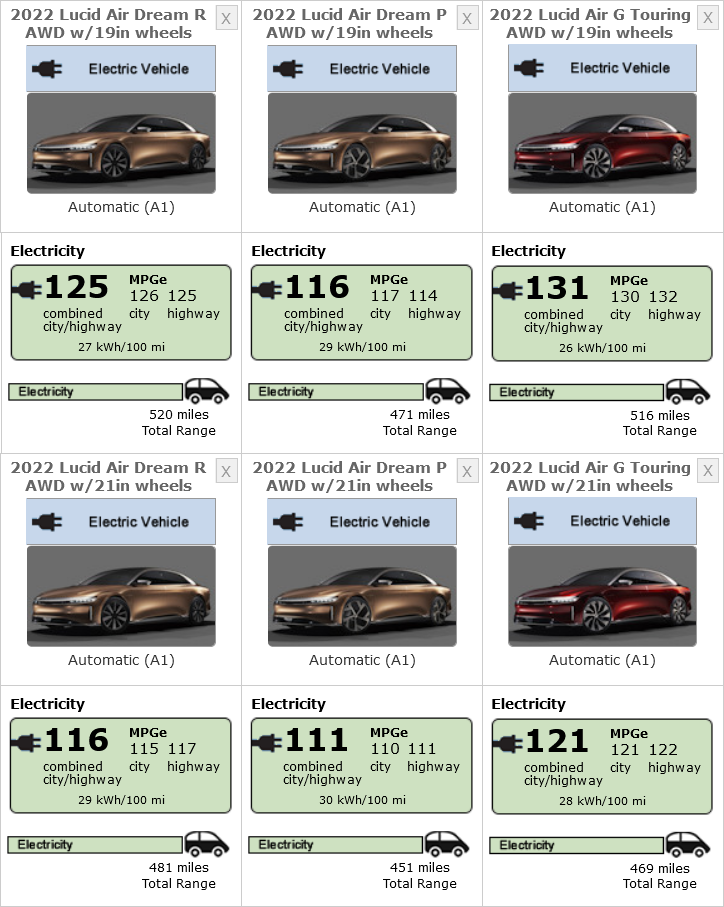 As we can see, the Lucid Air Dream Edition Range (19") has the highest range of up to 520 miles. The Performance version of the car has a noticeably lower range, for a small gain of better acceleration (0-60 mph in 2.5 seconds instead of 2.7 seconds).

The less expensive Lucid Air Grand Touring (19") can go almost as far as the Lucid Air Dream Edition Range. The difference is marginal.

By the way, we initially assumed that all three versions are equipped with the 113 kWh battery pack, but we are actually not so sure about the Grand Touring version. It has higher efficiency and a similar range to Dream Edition Range, which suggests that (assuming the same charging losses), the battery might be smaller by several kWh.

A quick look at the pricing (the destination charge probably will be around $1,500, but it must be confirmed still).

Let's start with the individual EPA numbers for each version.

The range-oriented Lucid Air Dream Edition Range has an EPA Combined range of 520 miles (837 km), which is 49 miles (79 km) or 10% more than the Performance version.

The efficiency of this model is 125 MPGe: 270 Wh/mi (168 Wh/km), comparable to the Tesla Model Y Long Range AWD, but worse than the smaller Model 3 and Hyundai IONIQ Electric.

Moving forward, we have, the less expensive Grand Touring version, which has an EPA Combined range of 516 miles (830 km) - just 4 miles or 0.7% less than the Dream Edition Range.

Actually, the range might be marginally higher on the highway, as the EPA Highway range is 520.5 miles (837.5 km), 0.5 miles above the Dream Edition Range version.

This version is one of the most efficient electric cars ever with an overall efficiency of 131 MPGe: 257 Wh/mi (160 Wh/km). Better only is the Tesla Model 3 and Hyundai IONIQ Electric.

This is very interesting. If the efficiency is several percent higher than in the Dream Edition Range version, and the range is basically the same, we assume that the battery must be smaller (in terms of capacity).

The EPA's data also indicates that the battery is different between the Grand Touring and Dream Edition cars. It might be some 7 kWh smaller. At this point we're just guessing.

Let's see how the Range and Performance versions of the Dream Edition compare:

The Lucid Air Dream Edition cars are fully booked according to Lucid, so the second thing is to see whether the Grand Touring version is much different than the limited version:

Lucid To Offer Performance, Range Versions Of Air Dream Edition
Lucid Air First Drive Confirms It As An Absolute Threat To Tesla
By: Mark Kane
++
++
Got a tip for us? Email: tips@insideevs.com