That's a new high, despite the lockdowns.

A growing number of plug-in electric cars on the roads translates to the increasing number of electrically driven miles.

According to the U.S. DOE’s Office of Energy Efficiency & Renewable Energy, in 2020 the number of electric vehicle miles traveled (eVMT) in the U.S. reached an all-time high of 13.7 billion miles (22 billion km).

That's only about 12% more than in 2019, but we know how challenging last year was, including sales and lockdowns when people were driving less and working remotely in homes. 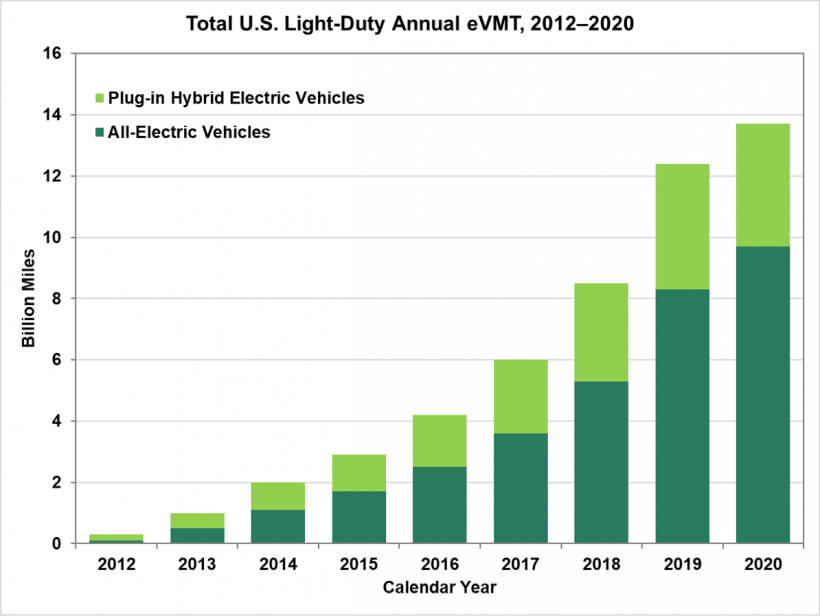 As we can see on the chart, the distance covered on electricity is higher every year. On top of that, we can also note that the share of BEVs mileage significantly increased, from less than half in 2013 to more than two thirds in 2020. The reason for that is mainly a much higher sales of all-electric cars than plug-in hybrids.

Overall, between 2020 and 2015 the number of electric vehicle miles traveled more than quadrupled. It means that plug-ins offset more and more emissions related to driving.

With the sales recently reaching new records, we guess that 2021 and the following years will bring us a significantly higher number of eVMT.

20 billion miles (32 billion km) in a single year might be just around the corner and that's only the beginning of an S-curve that will follow the growing plug-in sales, combined with better charging infrastructure and higher-range electric car models that simply can travel further and do it more conveniently.

US: Order Backlog For Tesla Model Y LR Is Full For 2021