We believe the DC fast charging potential is not fully utilized. We compare it side-by-side with the Volkswagen ID.4.

In this post, we will take a look at DC fast-charging results of the Ford Mustang Mach-E First Edition (Extended Range and All-Wheel-Drive) tested two days ago at an Electrify America charging station by our colleague Kyle Conner. You can see Kyle's 0-100% DC charging test video above, which appeared on his Out of Spec Reviews channel.

The entire charging session from 0-100% took about 2 hours and 32 minutes.

An important thing to note is this is the first out of multiple tests that Kyle intends to conduct to fully understand the charging performance, including starting the sessions at different states of charge (SOC). The Ford Mustang Mach-E he used in this test is one of the first on the roads with the initial firmware from the factory.

Let's get into it!

The DC fast charging curve of the Ford Mustang Mach-E is quite specific. It starts relatively strong and reaches the peak of 159 kW almost immediately, but it does not last long.

There is no sense to charge above 80% at DC fast chargers, especially during long-distance travel.

The biggest surprise is that the charging power drops sharply at 80% SOC to about 12 kW, and remains like that. The last several percent of SOC are at an even lower level of just several kW. At this point, there is no sense to charge above 80% at DC fast chargers, especially during long-distance travel.

We guess there is a high potential to tweak the software and improve the power flow above 80% SOC, as well as maybe bump the overall performance between 7-80% SOC, through one of the upcoming over-the-air software updates.

Here is a quick look at the SOC progress over time. Charging from 20% to 80% SOC took about 42 minutes.

In the chart below, the numbers are limited up to 90% SOC, because of the insufficient accuracy of the measurement and calculation of the final, low power area. 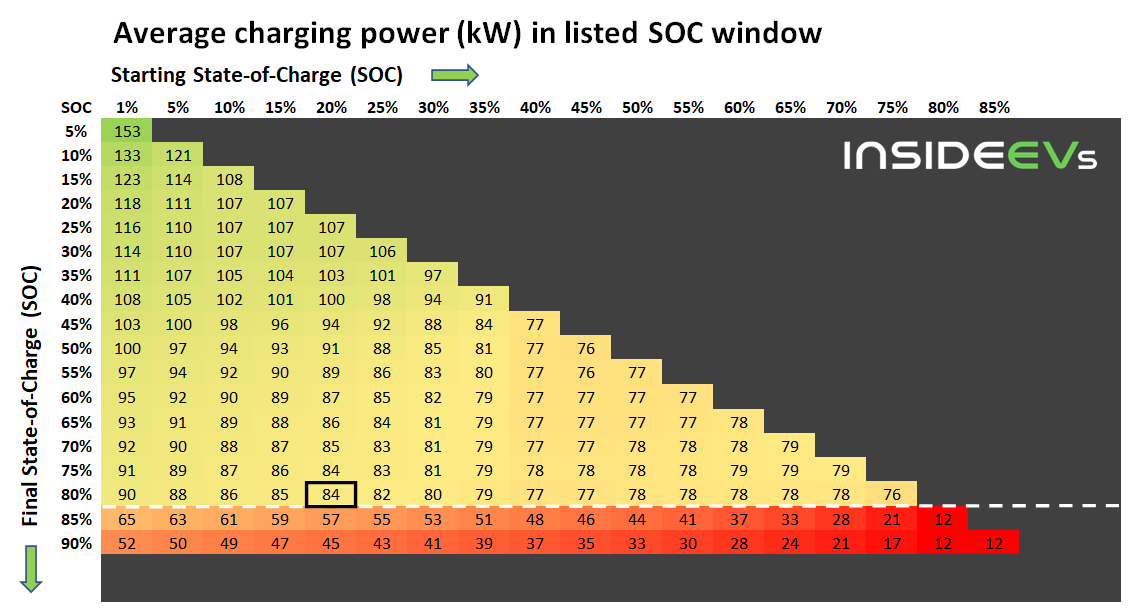 The average C-rate when charging from 20% to 80% SOC is 0.85C. We believe in a sporty car like the Ford Mustang Mach-E, it should be improved.

Taking into consideration the EPA Combined range of 270 miles (434 km) and available battery capacity of 88 kWh, we can assume energy consumption of 326 Wh/mile (203 Wh/km).

The effective average speed of range replenishing when charging from 20% to 80% SOC would be then 4.3 miles/minute (6.9 km/minute).

Taking into consideration the EPA Highway range of 249.2 miles (401 km) and available battery capacity of 88 kWh, we can assume energy consumption of 353 Wh/mile (219 Wh/km).

The effective average speed of range replenishing when charging from 20% to 80% SOC would be then 4 miles/minute (6.4 km/minute).

We will compare now the charging performance of the Ford Mustang Mach-E First Edition with the recently tested Volkswagen ID.4 (82 kWh version).

The charging curve reveals that the electric Ford has an advantage in peak power (159 kW vs 128 kW), but it's a short peak, after which the ID.4 takes the lead. Overall the ID.4 looks stronger (especially considering its smaller battery) and the data proves it:

If Ford would tweak its charging curve, the Mach-E has the potential to beat the ID.4. 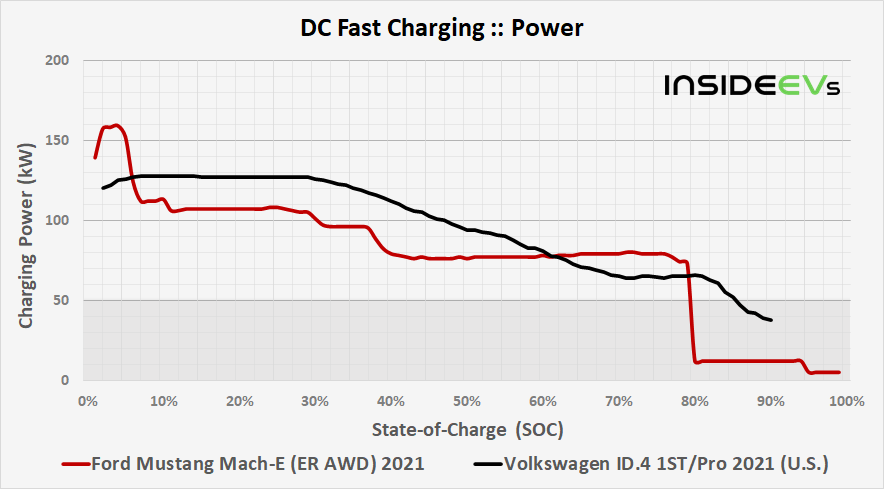 Now a quick look at the charging time, which is a noticeable win for the ID.4: 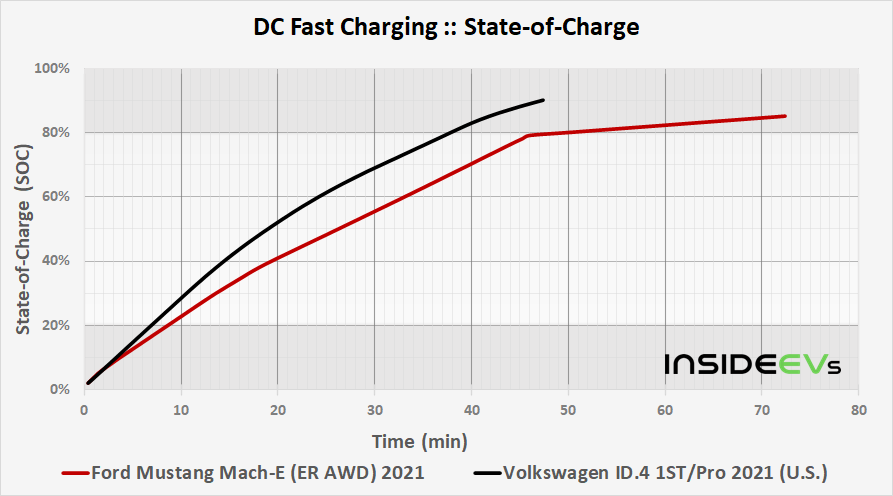 The Volkswagen ID.4 is very strong compared to Ford Mustang Mach-E because charging is allowed at a higher C-Rate: 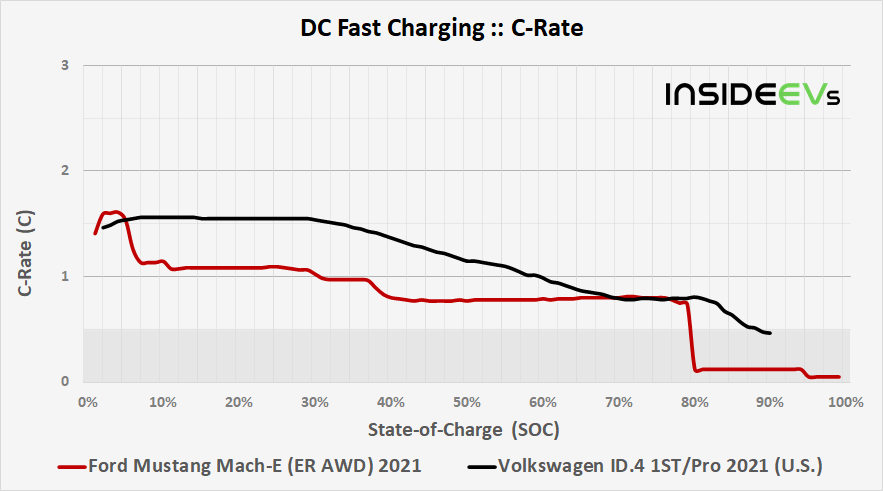 And now, a quick look at the range replenishing speed, for EPA highway range rating:

The ID.4 is about 12.5% quicker, which reflects both slightly higher average charging power and slightly lower energy consumption according to the EPA Highway test results. 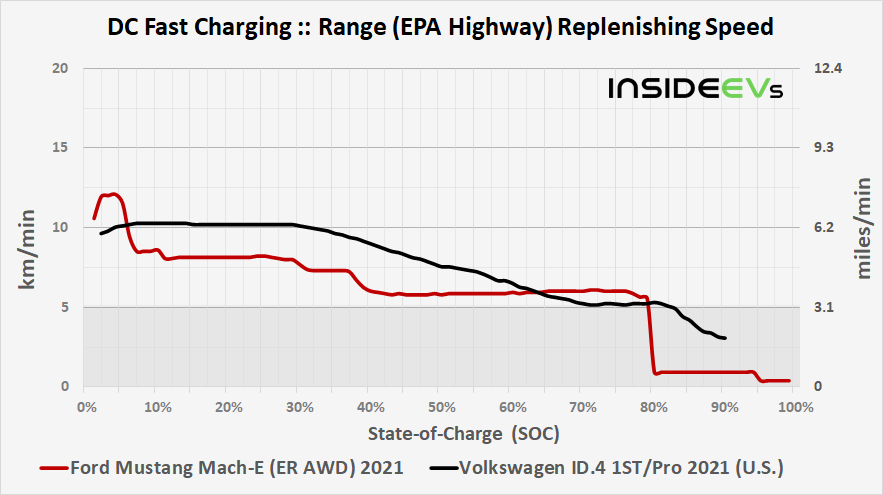 The conclusion from the initial DC fast charging test of the 2021 Ford Mustang Mach-E (ER AWD) is that its potential is not fully utilized.

The charging curve is not bad in the 20-80% SOC range (though it falls precipitously after that), but it clearly could be better and hopefully will be noticeably improved through a software update.