As usual, after the release of the quarterly report, we are checking Tesla's manufacturing infrastructure. The company has two car plants and is in the process of adding two more this year.

The currently installed potential manufacturing capacity exceeded 1 million units annually (although it requires a ramp to full capacity). Assuming the production rate in Q4 (almost 180,000), the company is on track to reach 800,000 soon.

Over time, Tesla is upgrading its plants or adding new factories so the potential output as of the end of a particular period is usually higher than the average production in this period.

Tesla's Fremont factory is currently able to produce up to 500,000 Model 3/Model Y a year.

The production of Model S/Model X was paused for a while to prepare the new, refreshed versions, but is expected to resume in Q1 2021. The potential output will then be 100,000 a year.

According to the Q4 report, the Tesla Giga Shanghai plant can produce up to 450,000 Model 3/Model Y per year. The site is still expanding.

Tesla Giga Berlin, under construction in Grünheide near Berlin in Germany, progresses quickly. According to the schedule, Model Y production will start in 2021. No info about other projects.

Tesla Giga Texas is under construction in Austin Texas. It's scheduled to produce Model Y and Cybertruck, but the Semi seems to be unassigned still (see table below). There is no word about the Model 3.

Here is a quick look at the site: 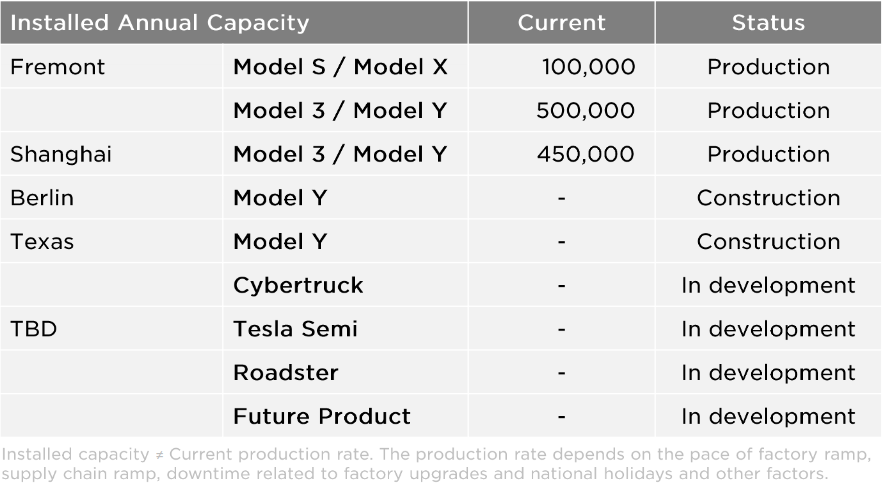