...which allowed the automaker to meet the European CO2 targets for passenger cars in 2020.

Mercedes-Benz announced that its global plug-in electric car sales more than tripled in 2020 and that the PHEV and BEV expansion will continue in 2021.

According to the preliminary data, thanks to the Q4 rush, the results turned out to be good enough to meet the European CO2 targets for passenger cars and thus avoid any fines.

An interesting thing is that most of the plug-ins (around 87,000) were sold during the fourth quarter of 2020. This is very telling of how hot a period it was to capitalize on incentives and deliver as many plug-ins as possible to avoid CO2 fines.

Ola Källenius, Chairman of the Board of Management of Daimler AG and Mercedes-Benz AG said:

“We more than tripled sales of our plug-in hybrids and all-electric cars. Demand for these vehicles increased sharply, especially towards the end of the year. Our internal forecasts for 2020 indicate that we will have achieved the European CO2 targets for passenger cars last year. We will continue to push forward with our ’Electric first’ strategy and the further expansion of our electric model initiative. Based on our current knowledge, we expect to meet the CO2 targets in Europe again in 2021,”.

In 2021, the company intends to significantly increase plug-in electric car sales of the Mercedes-Benz Cars division to reach a plug-in share of 13%.

To make it happen, Mercedes-Benz will launch four new electric cars: EQA, EQB, EQE and EQS, and renew the plug-in hybrid family with electrified derivatives of the new C-Class and the S-Class.

"Sales of plug-in hybrids almost quadrupled to more than 115,000 units. Approximately 20,000 EQC were handed over to customers worldwide. The EQV achieved sales of about 1,700 vehicles."

In other words, electric smart sales account for roughly 70% of the total volume.

"The largest market for smart was Germany: There, strong demand for all-electric models was significantly boosted by the German government subsidy, which led to doubled electric smart deliveries (+104.9%)."

Out of that, almost 6,200 (more than tripled year-over-year) fall on electric vans: eVito and eSprinter. That's close to 1.9% of the total volume.

"At the same time, the launch of the eVito in additional markets and the market launch of the eSprinter more than tripled sales of electric vehicles."

“We are entering the new year with confidence, as we achieved very strong sales figures in the last two quarters. However, due to the global pandemic and numerous lockdowns, we saw a decrease in sales of our vans. Our electric vans are making a positive contribution to unit sales. We delivered a total of almost 6,200 electric vans worldwide. In Europe, we are the market leader in the segments of electric mid-size and large vans, each with a market share of more than one third,”. 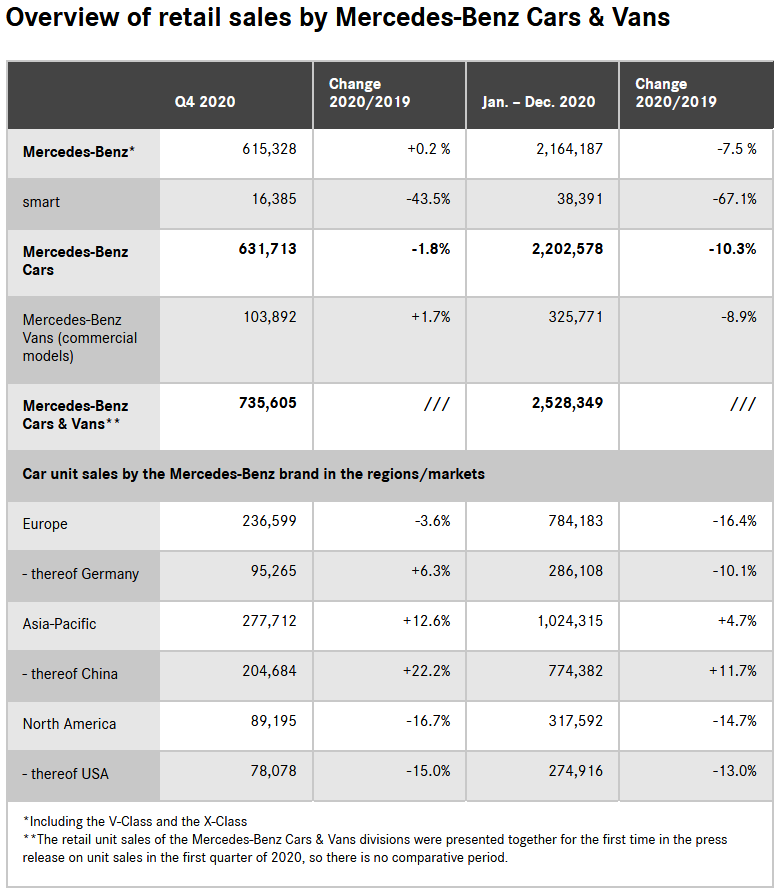 The $40,000 Ford F-150 Lightning Base Model Is A Crazy Bargain, But Why?
First Rivian R1S Reviews: A Great Vehicle For Family Road Trips
New Study: Changes In Driver Behavior Related To Tesla, Other EVs
Twitter Investors Sue Elon Musk For Manipulating Stock
The Ducati MG-20 Is An Electric Folding Bike That Packs Quite A Punch