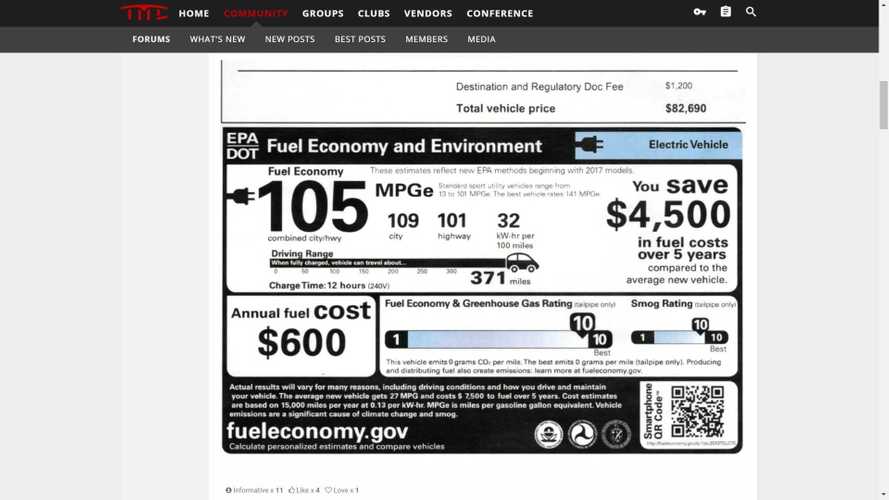 Curiously, the 351-mile range still does not show up on EPA’s website.

In February 2020, Tesla improved the Model S range to 390 miles and the Model X range to 351 miles. In June, the Model S passed the 400-mile barrier, but the Model X kept the previous number until now when a Monroney sticker in a 2021 Model X showed it is now at 371 miles.

Curiously, if you try to check the number on EPA’s website, there is no 2021 list for Tesla yet. More than that, the 2020 Model X Long Range Plus still presents only 328 miles of range there. Didn’t the EPA have time to update its website since February?

Regardless of government issues with bureaucracy, the Monroney sticker was presented by the TMC Forums user ColdWeatherEV in a thread. The sticker also shows the better range is due to an efficiency improvement. While EPA still says the Model X Long Range gets 96 MPGe, the 2021 Model X achieves 105 MPGe.

Tesla did not disclose which changes were made to the SUV to make it more efficient. In fact, it did not even update its website and keeps the 351-mile range as the official one there. We’d ask the company about that, but Tesla does not talk to the press anymore, and there are rumors it has killed its PR department for good.

Our best guess is that the same changes made to the Model S so that it could reach 402 miles of range have now been implemented on the Model X. In tweets, Elon Musk mentioned “many small hardware improvements throughout the car that have been introduced gradually over past several months.”

The Tesla CEO also said better wheels and tires would make the 400-mile range possible for the Model S. Would that have delayed the range improvements for the Model X? We’ll probably only know if a Tesla supporter asks Musk on Twitter about that.