Lucid Reveals Base Air Sedan Range, Pricing: Gets All Up In Tesla's Kitchen 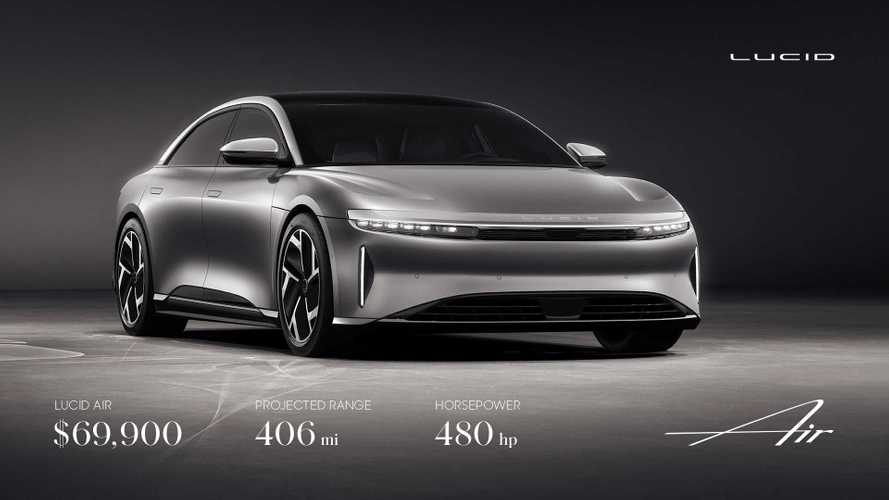 Lucid Motors today has announced the most affordable version of the Air sedan (simply called Lucid Air) will have a starting MSRP of $77,400. That means a base Air with 406 miles of range and 480 HP can be had for $69,900 after deducting the $7,500 federal tax credit. We should note that the Lucid Air has not yet been certified as tax-credit eligible by the IRS, but that should be a simple formality.

Just in case anyone failed to notice, just yesterday, Tesla announced a $3,000 price reduction for the Model S Long Range Plus, taking its starting MSRP down to $71,990. Since Tesla's vehicles no longer qualify for the Federal Tax Credit, the Lucid Air will cost $2,000 less than the base Model S Long Range Plus. Even though the base Lucid Air won't be available until sometime in 2022, we find the timing of Tesla's price reduction curious, to say the least.

The Lucid Air sedan will really be the first EV to be a direct competitor with the Tesla Model S, and beats it's Tesla counterpart in many regards. The Air has more interior passenger and cargo space, and the interior is more luxuriously appointed than any Tesla vehicle is.

Tesla's robust network of Superchargers is unmatched, therefore the Air's faster-charging capabilities may not be as big of an advantage as they look like on paper, at least initially. Dc fast charge infrastructure is rapidly expanding, led by the efforts of Electrify America.

“The Lucid Air is a vehicle that thrills me personally because it delivers a level of performance, efficiency, and luxury that is currently unseen in today’s EVs,” said Peter Rawlinson, CEO and CTO, Lucid Motors. “Our vision from the beginning – what drives this company – is creating the world’s best EV technology while making it progressively more attainable over time. With the starting price of Lucid Air range announced today, we are setting the stage for broader adoption of the latest, game-changing EV technology.”

As an additional perk to commit to a Lucid Air now, customers who reserve any of the four versions of the Lucid Air will receive three years of free charging on Electrify America’s growing nationwide network of ultra-high-speed charging stations.

Additionally, time won't stand still for Lucid, and Tesla is always improving on its offerings. By the time this entry-level Air is available, Tesla may be using their new battery cells on the Model S. That would mean the range, as well as performance, would likely be improved.

The Lucid Air comes standard with single-motor rear-wheel-drive configuration but can be ordered in all-wheel-drive form. Lucid's DreamDrive advanced driver-assistance systems are optional on the entry-level Air, which Lucid promises is "combining the most comprehensive sensor suite on the market with a cutting-edge driver monitoring system". Luxurious interior appointments for the Lucid Air model include PurLuxe animal-free interior trim in the Mojave theme, the 34” Lucid Glass Cockpit curved, floating display, and the largest frunk ever available in an electric sedan.

Reservations are now open for all Lucid Air models starting as low as only $300.00 for the base Air. Those interested can do so at the Lucid Motors website or at one of the two Lucid Motors retail locations that have already opened for business, including the recently opened Beverly Hills Studio and service center. Customer deliveries for the Lucid Air Dream Edition begin in early 2021.