Ford Kuga PHEV is the top selling model of any kind for the second consecutive month!

Plug-in electric car sales in Denmark went through the roof this year. August, in particular, turned out extremely strong with nearly 3,500 new registrations, which corresponds to a 20% market share! That's way above average, even for fast growing Europe.

After eight months of 2020, nearly 15,000 new plug-ins were registered, which is 390% more than a year ago! The average market share during the period is 12%. Most of the sales - about two-thirds - are plug-in hybrids.

One of the most interesting things in the Danish market is the demand for the Ford Kuga PHEV (Ford Escape PHEV in the U.S.), which with 1,509 registrations in August and 4,122 is an absolute number one both for the month and for the year, taking respectively 43% and 27% share among plug-ins.

Not only that, the Ford Kuga PHEV is the top selling model of any kind in Denmark this summer, for two months right now - July and August.

The second best on the list year-to-date - Tesla Model 3 - slightly improved year-over-year, and with 1,713 registrations is in a comfortable second place.

Many other models are also at its best form right now, but generally below 200 registrations per month.

Netherlands: Plug-In Electric Car Sales Up By 75% In August 2020 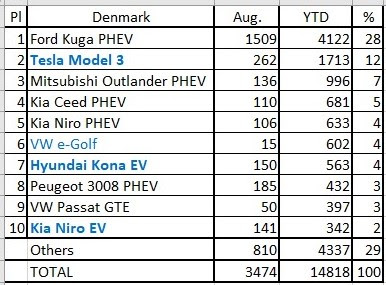 Jay Leno Shares His Thoughts On Tesla Model S Plaid Record
Exactly How Much Is A Tesla Model 3 With All Costs Included?
Sandy Munro Finds Ford Mustang Mach-E's Thermal System A Nightmare
Tesla Model 3 Is Now The 16th Best-Selling Car In The World
Quickest Dodge Ever Will Be An EV To Compete With Tesla Plaid