This is the lowest tariff for solar energy production in the world, though the news went mostly unnoticed.

A rather meaningful piece of energy news went almost unnoticed in recent weeks. The Abu Dhabi Power Corporation announced the lowest tariff for solar energy in the world. The new record came as the winning bid for the upcoming 2 GW solar power plant, the Al Dhafra Solar PV project, set the world’s most cost-competitive tariff for solar PV energy, at USD 1.35 cents/kWh (AED 4.97 fils/kWh in local currency). This is approximately 44% lower than the tariff set just three years ago for the ‘Noor Abu Dhabi’ project – Abu Dhabi’s first large-scale solar 1.2GW PV project and a world record tariff-setter at the time – which commenced its commercial operation back in April 2019.

The gigantic photovoltaic power plant is scheduled to come online in mid-2022. Expected to cover an area of 20 square kilometers, it will almost triple Abu Dhabi’s solar power generation to 3.2 GW and help the Emirate state achieve its 2030 goal to reduce carbon intensity by 70% compared to 2015. This single addition could on its own supply almost 3% of the entire United Arab Emirates annual electricity demand (~127 TWh in 2018). The Al Dhafra and Noor projects firmly position Abu Dhabi among the leading regions of the world for solar power adoption and price benchmark. To better appreciate the competitiveness of this bid, it’s worth noting that even old and fully depreciated coal power plants have LCOE values around USD 3.3 cents/kWh (see Lazard’s Levelized Cost of Energy 2019).

Ford Patents Solar Charging Cocoon For Its Electric Car: Will It Be Sold?

It Turns Out The Tesla Solar Roof Actually Does Exist, Who Knew?

But why would this piece of news matter? Surely this is a geographical exception, a sunny oasis in a world otherwise dominated by cheap fossil fuels, a result that cannot be replicated worldwide. Well, not really. While the Middle East is naturally bound to become a solar powerhouse in the coming years – its wide desert areas and sunny climate result in typical PV load factors above 1800 kWh/kWp installed – high levels of solar irradiance are actually available throughout the world within a broad range of latitudes. A beautiful map from Global Solar Atlas is worth a thousand words. 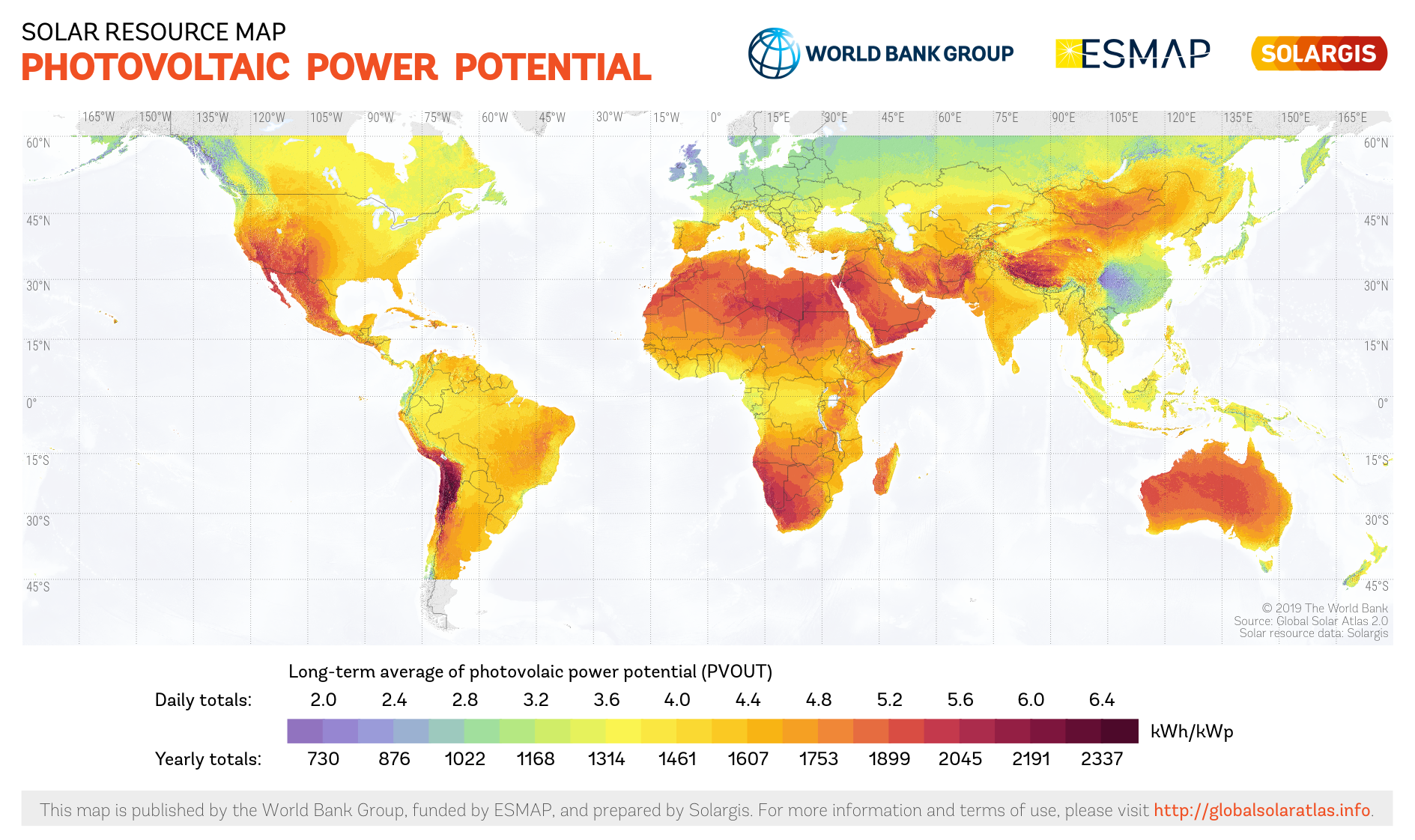 As global data show, a vast portion of the planet is in fact ripe for exploitation with ultra-cheap solar power. And the news from the Emirates are indeed echoed by comparable prices set elsewhere over the past year, from Europe to America. The previous solar tariff record belonged to Portugal: the southern European country claimed the spot in July 2019, at about USD 1.64 cents/kWh for a 150 MW project. 211 MW of PV capacity was signed at USD 1.75 cents/kWh in Brazil just weeks before that, while a sub-2 cents/kWh bid was also presented in the same period for the Los Angeles Eland Solar & Storage Center project in Kern County, California (the final version of the project will, in fact, be a 300 MW / 1.2 GWh energy storage installation – with an aggregate price of USD 3.962 cents/kWh for dispatchable power).

At the levels being reached by utility-scale solar, even northern, rainy countries such as the UK – with half the solar irradiance of the Emirates – could soon see projects achieve LCOEs below USD 3 cents/kWh (if they are not beat by cheaper wind power at those latitudes). We are now at a point where economics alone is the main factor driving the energy transition towards sustainability. With an annual global growth hovering around the 100 GW mark before the coronavirus crisis, solar power is now poised for a long-term additional boost through favorable economic recovery policies planned by most governments around the world. The unfolding economic crisis, likely to push down solar capital costs even further, will only make the PV market even more attractive. Cheap large-scale battery storage, whether coupled to these projects or as stand-alone peaker plants replacement, will be the natural ally.

With the global financial community increasing its focus on fossil fuel divestment and sustainability, we can expect the booming utility-scale solar market to mark its presence in all continents at increasing pace. Investors with deep pockets, looking for stable and predictable returns at a time of increasing uncertainty and change, will safely bet on massive renewable energy developments for reliable returns on their portfolios, while avoiding the volatility and risk involved with projects in the incumbent sources of energy.

As the fossil fuel industry struggles in the wake of the coronavirus emergency, all its hope lies on a swift, permanent and unlikely recovery to higher prices to maintain its presence. An ironic plan with, ultimately, little chance of success.