At least temporarily, Tesla Model 3 was behind the all-electric BYD Qin.

The automotive market in China continues to recover, as in April 2020, overall car sales nearly matched results from a year ago (down only 3%).

The Tesla Model 3 remains on the top after four months, but with "just" 4,312 sales it was actually second best in April, behind the BYD Qin Pro EV (5,096). It will be interesting to see how things will change once BYD introduces the Han in volume.

Previous reports already indicated that the Model 3 result in April would be weaker (3,635 wholesale shipments) and now we got the confirmation. Reuters adds that in total 4,633 Tesla cars were registered (so 312 Model S/X we guess).

Moving forward, a relatively strong result last month was noted also by GAC Aion S (3,586), NIO ES6 (2,907) and the all-new 7-seat SUV Li Xiang One (aka Leading Ideal One) (2,622), which happens to be a series-hybrid plug-in (Extended Range Electric Vehicle). 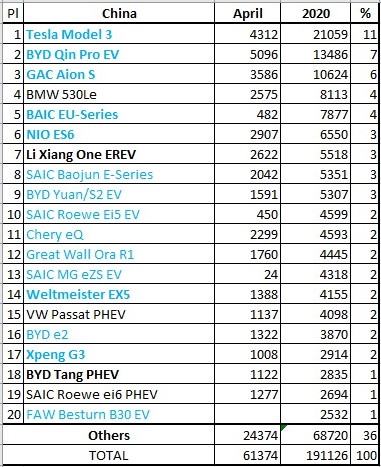