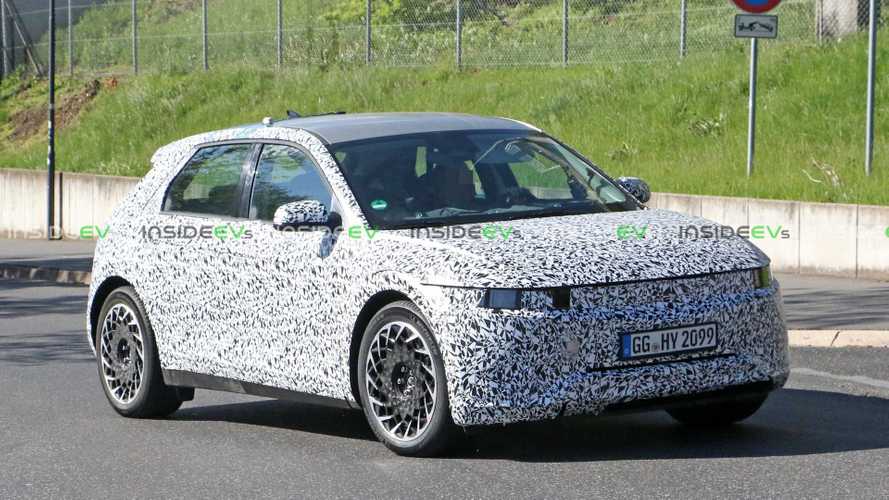 It looks like a slightly tall yet quite rakish and sporty hatchback, with plenty of cool design details we didn’t initially see.

The idea of a new affordable electric crossover is certainly enticing for prospective EV buyers, and if it’s a dashing and sporty looking model, it’s even more appealing. This is what Hyundai seems to be going for with the 45, and we’re finally able to tell thanks to a new set of much more revealing spy photos.

Whereas in the previous photos, the front, sides, and rear of the car were completely covered by black tarps, now we get a closer look at the car’s actual shape thanks to these photos which show a prototype wrapped in psychedelic camo.

Hyundai Wants To Clear Up EV Misconceptions With Kona Electric
⠀

We can, for instance, now see the 45 will have pop-out door handles that stay flush with the body, as well as just how steeply raked the rear screen is - it’s really more of a fastback than a traditional crossover.

We are now also able to tell that the shape of the front light clusters will be similar to the concept’s; they won’t change much. As for the rear lights, well, the prototype used placeholders, so we can’t really say. Another detail that's visible in these photos is the slanted crease that runs from the top of the front door to the bottom of the rear door.

From the side, the 45 looks quite long and low, so it’s safe to assume that it will be sold as a step up from models such as the Kona Electric. Even now, we can tell this has the potential to become a very good looking electric crossover, even if it won’t exactly mirror the design of the concept that previewed it.

Gallery: 2021 Hyundai 45 Prototype On The Nurburgring

EDIT: Our spies sent us a new batch of photos (posted in the gallery above) that shows the 45 prototype tackling the Nurburgring, in Germany. To us this means Hyundai wants the 45 to be a fun-to-drive, sporty feeling vehicle, which is good, because we need more of those at an affordable price point. Oh, and one of these photos shows the first glimpse of the dashboard.