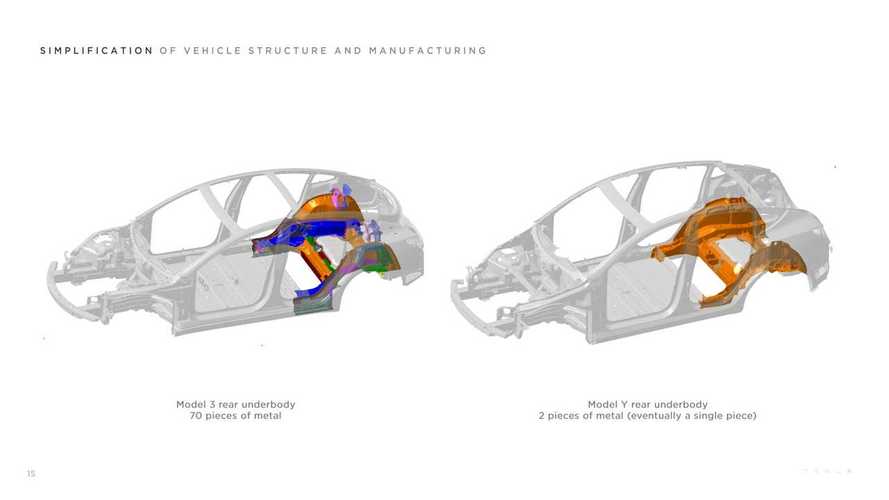 Tesla could at least send flowers to Sandy Munro in appreciation for his tips.

Tesla still owes us some explanations on the cast parts it has adopted on the Model Y. Sandy Munro was the first one to unequivocally show how they were with the teardown videos he is making, but the Canadian engineer is more involved in that than it may seem. It was Munro who thought the Model 3 did not need 70 stamped parts. Tesla listened and created three castings to replace that structure, as Munro showed. With its Q1 2020 earnings report, Tesla reinforced that with images in the report.

As you can see above and in the image below, Tesla shows the cast parts as a “simplification of vehicle structure and manufacturing.” It could also mention it was Sandy Munro’s suggestion in the first place, but that is not in the report. Perhaps he would be happy to receive some flowers as a “thank you” gesture.

In the images, there are two confirmations and a promise. Tesla says the Model 3 has 70 stamped parts for its rear underbody. It also confirms the Mode Y has only castings for that structure, but it names only two. This is possibly because the company does not consider the bracket that joins them as relevant. Anyway, it is also cast.

The promise contained in the Q1 2020 Update is that the two castings will be “eventually a single piece.” Sandy Munro mentioned in a recent video Elon Musk had promised that. The Tesla CEO also said the casting machine would be as big as a house.

Apart from more explanations on how these parts are made and if they are cast in Lathrop, it would be nice to learn if Tesla plans to have these cast parts for the Model 3 as well. If it does, when will this new Model 3 be put for sale?

What about this massive casting machine? Where will it be installed? How many parts can it produce every day? Isn’t there a risk that it becomes a bottleneck? As you can see, we are still in need of a lot more explanations than the Q1 2020 Update provides. We hope they do not take long to emerge.