First Fastor Charge and now Lincoln eGlide. What does Ford have up its sleeve?

We just received news from members on MachEClub.com, a Ford Mustang Mach-E forum, that the automaker filed a trademark application with the U.S. Patent and Trademark Office. More specifically, it's for the LINCOLN eGLIDE.

Initially, people called it the Lincoln eGlide EV, but there's nothing official that points to this being the case. However, we do know that both Ford and Lincoln are ramping up their electric vehicle efforts. Sadly, though, Lincoln was supposed to have an upcoming EV project in partnership with Rivian Automotive, but that has now been canceled due to COVID-10.

We do know that the eGlide trademark is intended for motor vehicles and electric vehicles, but that doesn't help much. The 'e' suggests it will be related to an EV, though we can't say that with 100-percent certainty. It seems like a strange name for an EV, but some would argue that Ford's recent 'Fastor Charge' trademark is weird as well. Not to mention the mixed opinions about the Mach-E name, as well as calling the electric SUV a Mustang. 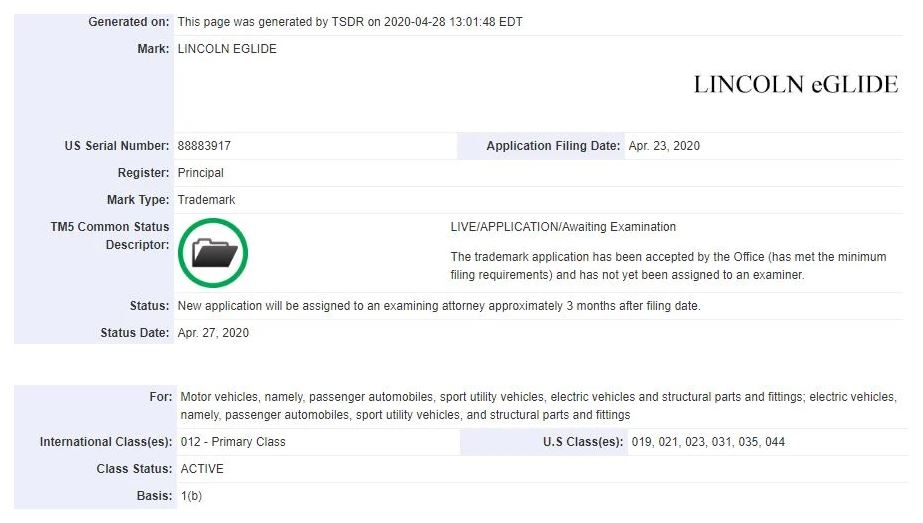 Some speculate that eGlide could have something to do with a vehicle suspension, an operating mode, or a component. Could it be something like a Ludicrous Mode or Launch Mode? Will Lincoln bring the world's most coddling electric SUV to market?

We'd love to know what you think. If you have any inside information or additional insight, please reach out to us. In the meantime, let's discuss this in the comment section below.