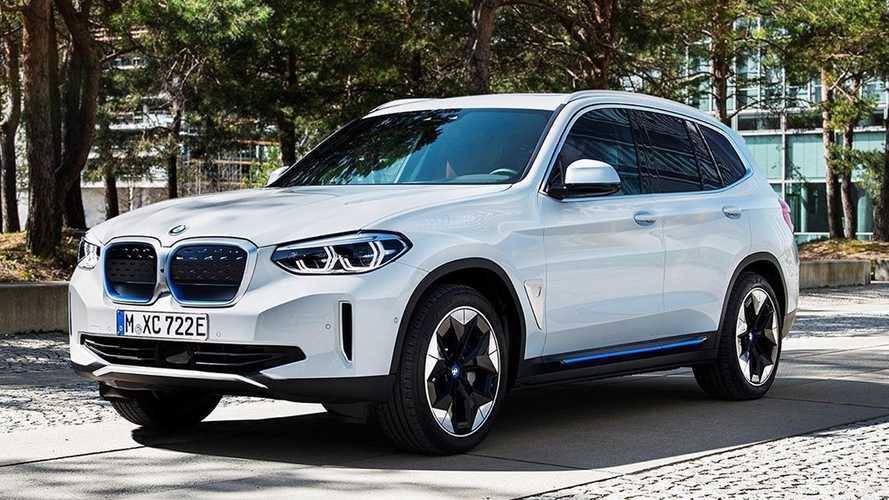 This is the final production look at the all-electric BMW iX3 SUV.

We knew pretty much everything there was to know about the BMW iX3, except for its final production look. Well, now we need not wonder any more, because two photos showing its front and rear three-quarter views have leaked online and they completely reveal what it’s going to look like; they were leaked by an Instagram account that only has these two photos, but they do look like the real deal.

As we were expecting, it didn’t change much from the close-to-production concept preview that it revealed some two years ago. Not even the grille that’s unique to the electric version of the X3 - its two (blanked off) nostrils are connected in the middle (not separated like in the regular X3) and they feature blu accents around their inner edges.

Its aero wheels, unique to the iX3, are also in place, as is the piece of silver trim that sits behind the front wheels and bares the BMW i logo. There’s also a blue streak across the black side sills, while from the rear we can immediately spot the blue diffuser (and the lack of any tailpipe).

As a reminder, the iX3 is the fully electric version of the BMW X3 G08, it draws juice from 74 kWh battery pack, it has a WLTP range of 440 km (273 miles) and it has a single 282 horsepower electric motor driving the rear wheels. The iX3 is based on the China-only long-wheelbase version and it will be manufactured in China and be shipped to all markets where it will be sold from there.