The Tesla Model 3 Has An Unusual Windshield Too: Is It The Same?

Journalism is fascinating in the way stories grow article by article. When something new emerges, it attracts more information. It is like a little image that was, in fact, part of a puzzle. Check our story on the unusual windshield the Tesla Model Y has, for example. After we got fascinated with it, some of our readers pointed out that the Model 3 also has a windshield like that. It is on the Tesla part catalog under the code 1466270-00-C. And that leads us to a bigger picture and new questions.

As we said in our previous article, the 1466270-00-C windshield is for LHD vehicles only, as you can see in the image below. The windshield used on right-hand-drive (RHD) Model 3 units must have a different code. If you happen to know which it is, please tell us.

Gallery: Do The Tesla Model 3 And Model Y Share The Same Unusual Windshield?

That happens because the Model 3 and the Model Y have a more prominent windshield wiper that must be on the same side of the driver. The smaller one is on the opposite side. Both of them retreat well below the frunk lid upper line to make the car have less aerodynamic drag. Check the British video below to see how the windshield wipers on the Model 3 work under the rain.

Another hypothesis that this resemblance has confirmed is that this unusual shape will make the Model Y windshield expensive: The Model 3's already is. There is a thread at TMC Forums that shows it is far from affordable. This Tesla Canuck video states it can cost up to twice as much compared to the ones used in similar vehicles.

The Model Y is still not included in the Tesla parts catalog. When it is, we will be able to solve the first doubt that this information brought us: Do the Model Y and the Model 3 use the same windshields? We'd ask Tesla, but it does not talk to the press. 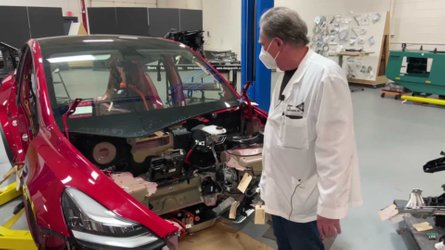 Can You Explain Why The Tesla Model Y's Windshield Is So Unusual?
⠀ 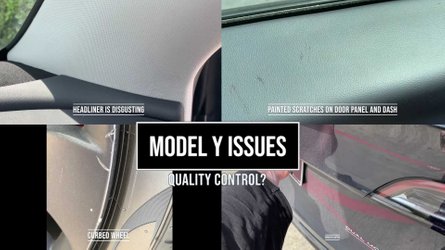 Tesla Buyer Gets New Model Y, Wonders If It Was Used For Years

The second doubt we have relates to an issue the Model 3 revealed back in January 2020. Some units present a considerable water leak behind the glove box. That is precisely the point in which the windshield extends under the frunk lid.

Could the windshield design be related to this issue on the Model 3? Will the Model Y also be subject to it? If RHD Model 3 units also present this problem, that may be a good indication that Tesla has to come up with a solution to drain the water that gets there in a more efficient way. Again, our readers will probably be able to add more pieces to this puzzle. If you can help us tell what it shows, wait no further to get in touch.

Hat tip for Domenick Yoney for contributing to this story. Thanks, Dom!