Caleb Sundvall reported it on a Facebook group and more people had similar issues.

Tesla’s financial life may have stopped making water, but its cars have not. If you think you have already seen the video above, give it a go. That is not Sergio Rodriguez’s video, presented to you thanks to windshield installation problems. It is a new one, posted by Caleb Sundvall, a Tesla Model 3 owner that was pretty happy to have taken delivery of his EV back in December. Until it literally started making water. 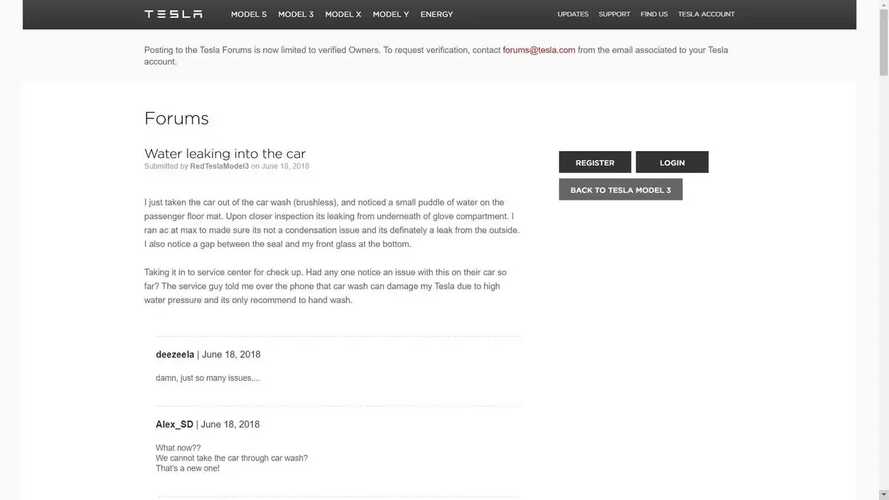 Sundvall asked in a Facebook group if anyone had had a similar problem. Among all the people that were just amazed to see what happened, at least three others reported related issues: Chase Ward, Jin Kazama, and Tammy Smith. There are others that do not confirm having the same defect despite looking like that, so we cannot include them in this list. For the ones claiming this is anecdotal evidence, Tesla itself has the problem reported in its forum.

⠀ Tesla Model 3 Taking A Leak Is A Common Issue: See What Causes It
⠀ Tesla Repairs Model 3 A-Pillar Rust Issue On Its Own Account

We hope the company keeps this thread active – you can check it here while it does. In the past, it has erased discussions that were reported by the press, but we have a copy anyway.

The user jhunt noticed a similar issue with his 2018 Model S 100, which may indicate other models from the EV brand may also be affected.

RedTeslaModel3 said the issue is caused by water ingress on the HVAC air duct, according to Tesla technicians. Again, they have reported the fix was just an adjustment on what was “within specs.” We bet the repair was made on goodwill as well.

In the forum, you still see people trying to dismiss the problem with the excuse that British cars are worse or that you should not submit the Model 3 to car washes and only wash it manually. For those, the user creativeguy has the best answer ever. Creative indeed!

ForkLiter reported that there is even a standard repair Tesla issued to its technicians, which implies this is not “within specs” nor something the company is not aware of. The technical repair that ForkLiter saw on the iPad of the mobile tech had the precise instructions for fixing the problem. Again, it was something in the air duct.

That is the same diagnostics reported by Chase Ward, Jin Kazama, and Tammy Smith, as you can see in the images in the gallery.

Ward bought his Model 3 in October. It was not new, with 4,000 miles on the clock, but it had never been in an accident, and that is still true under Ward’s possession. He noticed the issue in December, the same month Sundvall took delivery of his. He made a video. We asked his permission to have it here as well, but we are still waiting to hear from him about that.

Once again, we have an issue in Tesla vehicles that has technical instructions for solving – like a Technical Service Bulletin – but is “within specs.” Something that needs to wait for the proper parts for fixing, which take weeks to arrive.

If you happen to face the same problem all these people have with their Model 3, get in touch with us. We may help you get this sorted by telling your story here, as we are telling Sundvall’s. Ward’s. Kazama’s...