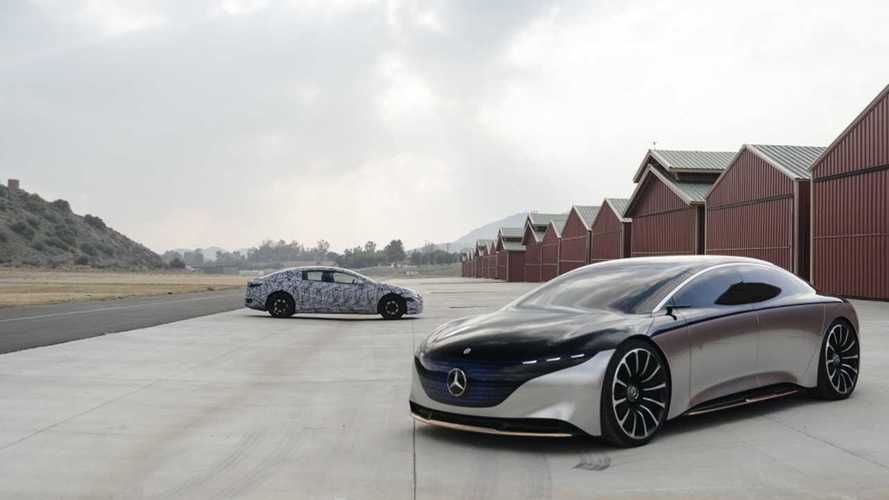 Hot version of the EV sedan could reportedly have in excess of 600 horsepower and be here in 2022.

Mercedes-Benz has yet to lift the veil off the production version of its EQS all-electric sedan and the rumor mill has already churned out a report that it will also come as a hotter AMG version. And it will apparently be at least as powerful than the current AMG S63 model, so that means it could have in excess of 600 horsepower and 663 pound-feet (900 Nm) of torque.

According to Autocar, it won’t be available right away, though. Mercedes-Benz intends to launch the standard version of the EQS in 2021. That model is expected to have 469 horsepower and a WLTP range of up to 435 miles (700 km) courtesy of a 100 kWh battery pack. The as of yet unconfirmed AMG variant will sacrifice some range for performance, a similar tradeoff to what we’ve seen between the various Porsche Taycan versions.

Take A Peek Inside The Mercedes EQS And Its Dual Screens
⠀

We Take A Closer Look At The Mercedes-Benz EQS Prototype
⠀

We Go For a Spin In The Concept Mercedes Vision EQS

The source article goes on to say that even though it’s unconfirmed, it has it on good authority that Mercedes will utilize the same higher performance electric powertrain in hot AMG versions of the smaller EQE, as well as the electric version of the G-Class (expected to be dubbed EQG). This move would be similar to what the manufacturer does with the 4-liter twin-turbo V8 that it uses to power its 63-badged models.

With the extra oomph, the EQS AMG should drop its sprint time to 62 mph (100 km/h) from 4.2 seconds to something around the mid-3-second mark. That still means it won’t be as fast as the fastest Tesla Model S or Porsche Taycan, but since the EQS is the electric equivalent of the S-Class, its main point of focus will remain on being plush and luxurious.

If Autocar is right, the EQS AMG could be here in 2022 and be the first of several spiced up (and AMG-badged) electric offerings.