February 2020 probably will go down in Chinese history as the weakest month for the automotive industry in years, as the overall passenger car market reportedly fell by 82%.

The plug-in electric car sales also went down, by 65% year-over-year to about 14,693, according to the EV Sales Blog.

On the positive side, plug-ins increased market share to 6.6% and 84% of total sales were all-electric. BEVs were also decreasing slower, by 57% compared to 81% in the case of PHEVs.

The early report (China Passenger Car Association (CPCA) data) shows that the Tesla Model 3 was the top-selling model and the Tesla brand captured a third of the plug-in segment. However the following data from other sources (via Reuters and Moneyball) revealed that Model 3 registrations were at 2,284. It's still the best-selling model for the month and for the year. 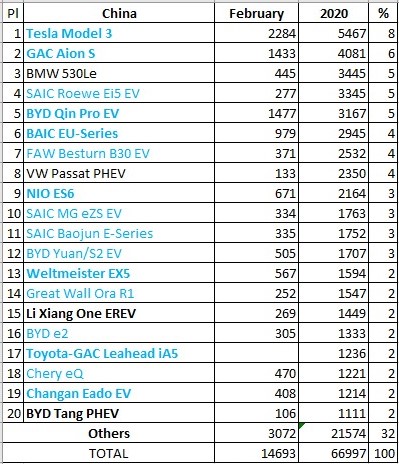