According to these guys, casting will indeed play a major role in the Model Y.

We had patents, an anonymous Twitter user, and a reader claiming that the Tesla Model Y will rely more on casting than any other mass-produced vehicle ever did. Three more specialists joined the conversation and, although they do not agree on everything, they believe cast parts will be an essential part of Tesla's strategy for its most affordable SUV. Or is it just a tall hatchback? 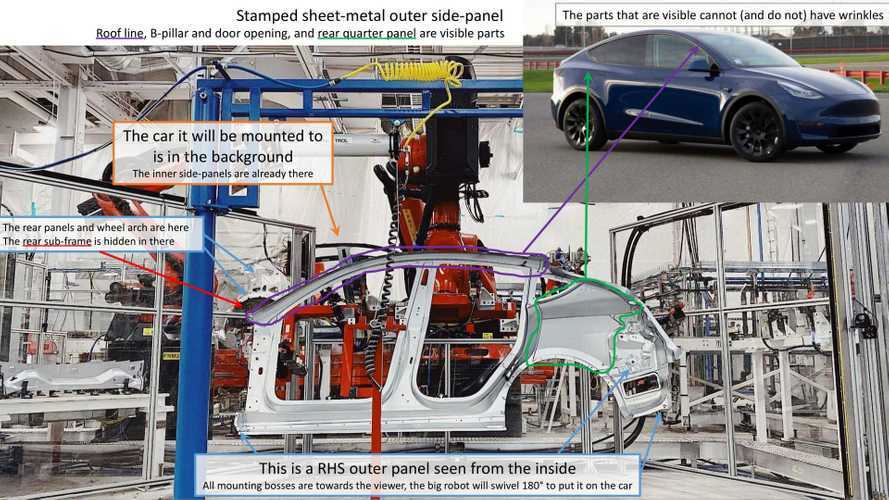 The video above comes from Peter Thompson, who has already helped to explain the stressed-skin structure of the Tesla Cybertruck. He does not think casting use is so extensive, as Michael Coldren told us. Nonetheless, he goes further than using only the images presented by Tesla in its Q4 2019 report. 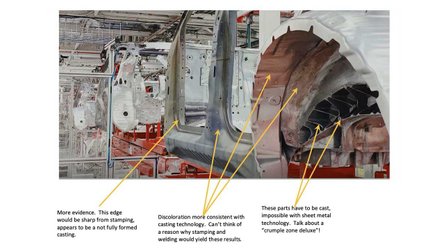 Could This Explain Why The Model Y Frame Casting Theory Is Correct? 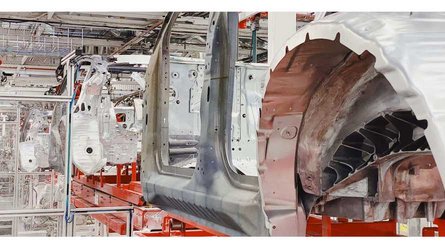 Thompson also analyzed the cutaway pictures that show the Model Y structure and compared them to the Model 3's. He sees parts there that seem to have been from casting, but he does not believe the door frames and sills to be cast, as Coldren did. In fact, nor does Arnaud Contet, another of our readers with a lot of experience in this area. 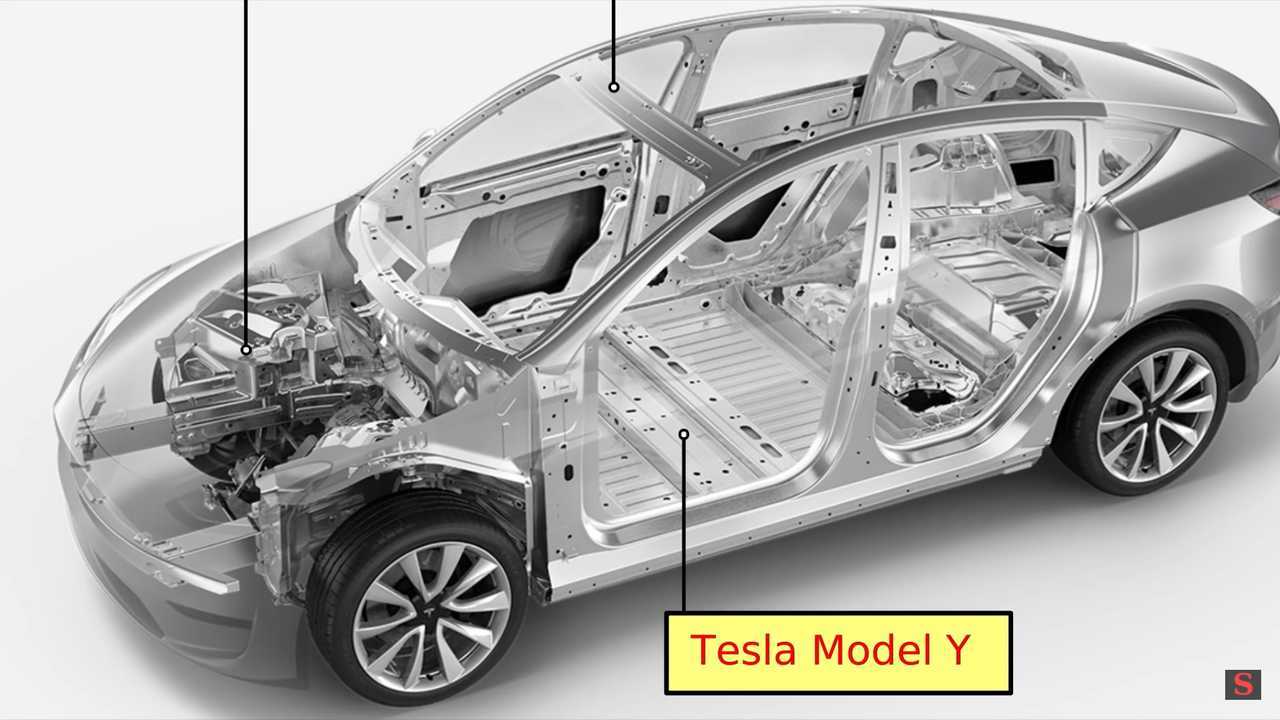 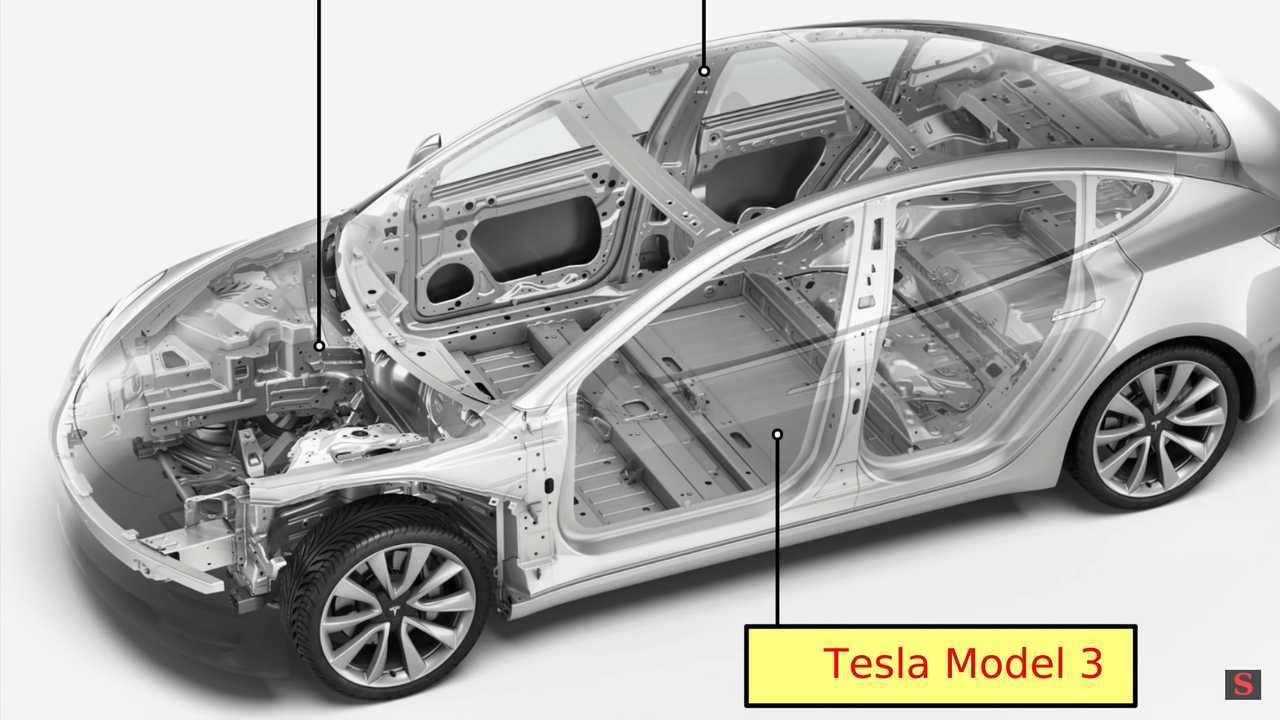 Contet has worked for more than 20 years in the automotive industry and is now "working in engineering at a company doing truck heat-exchangers, which have both stampings and castings." Check what he has to say about the discolorations.

“The discolored part is a hot-formed UHSS structural panel. The other ones are cold-formed,  like everybody else’s. To cover large mostly flat surfaces, the cost of sheet-metal is difficult to match, and the surface aspect is all but impossible.”

Robert J. Schaefer, owner, and founder of 3D Accuracy, also said the door frames are stamped, not cast, "with the exception of the areas inside the red borders I drew on pictures 1 and 3." You can see them below. 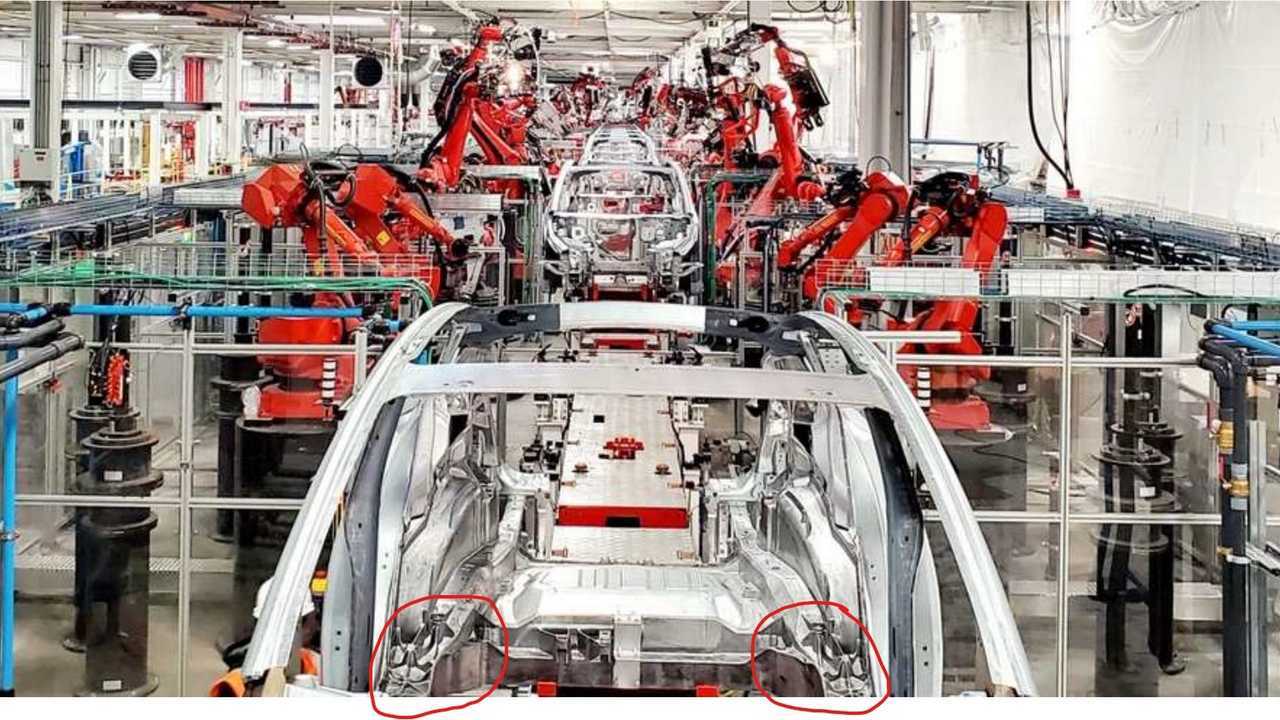 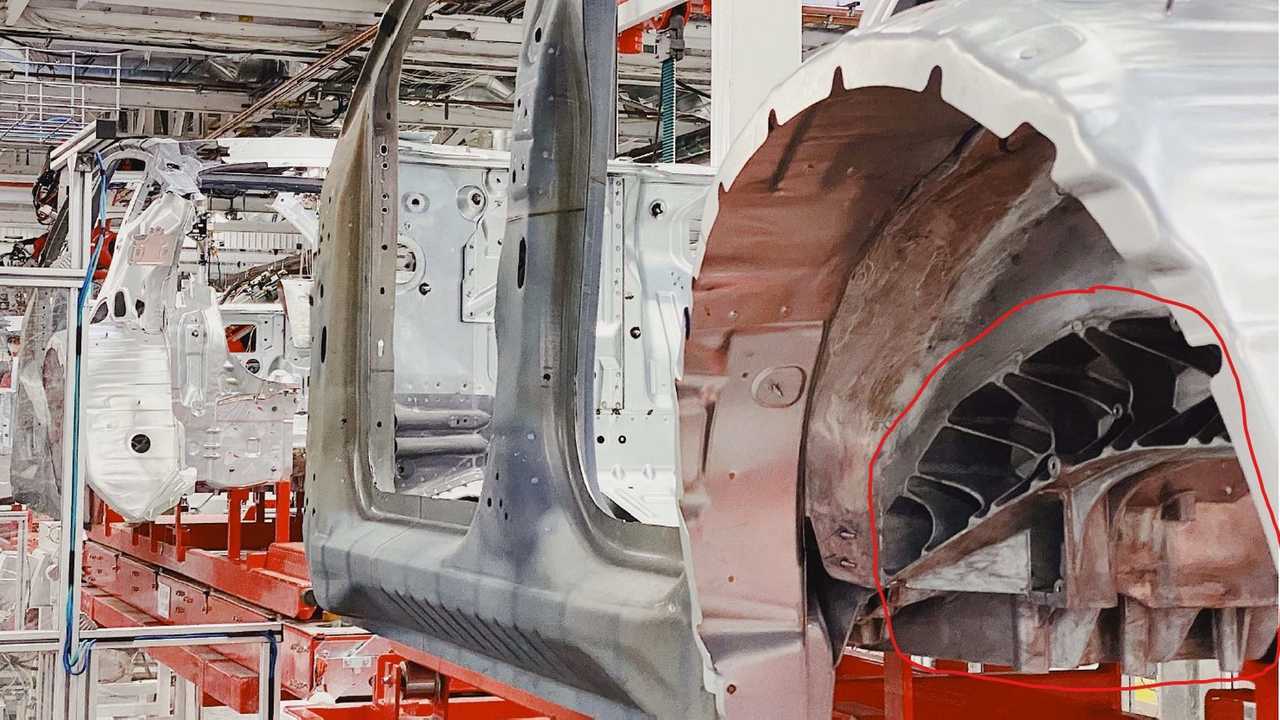 “The parts have several ribs, which is very common in cast parts as it gives the part strength. Those ribs appear to be thicker than what the thickness of a common stamped part would be which also indicates casting. You’ll also notice that the ribs have a curved shape to them. It’s far easier to create this type of geometry by CNC machining it in the die-cast mold and casting the part versus trying to weld many small unusually shaped stamped pieces together. On the cast parts, you’ll also notice a few bosses which are the round protrusions with a hole in the center. These are often used for assembling pieces together with the use of self-tapping screws or the holes are threaded after casting for machine screws. This is common casting geometry.” 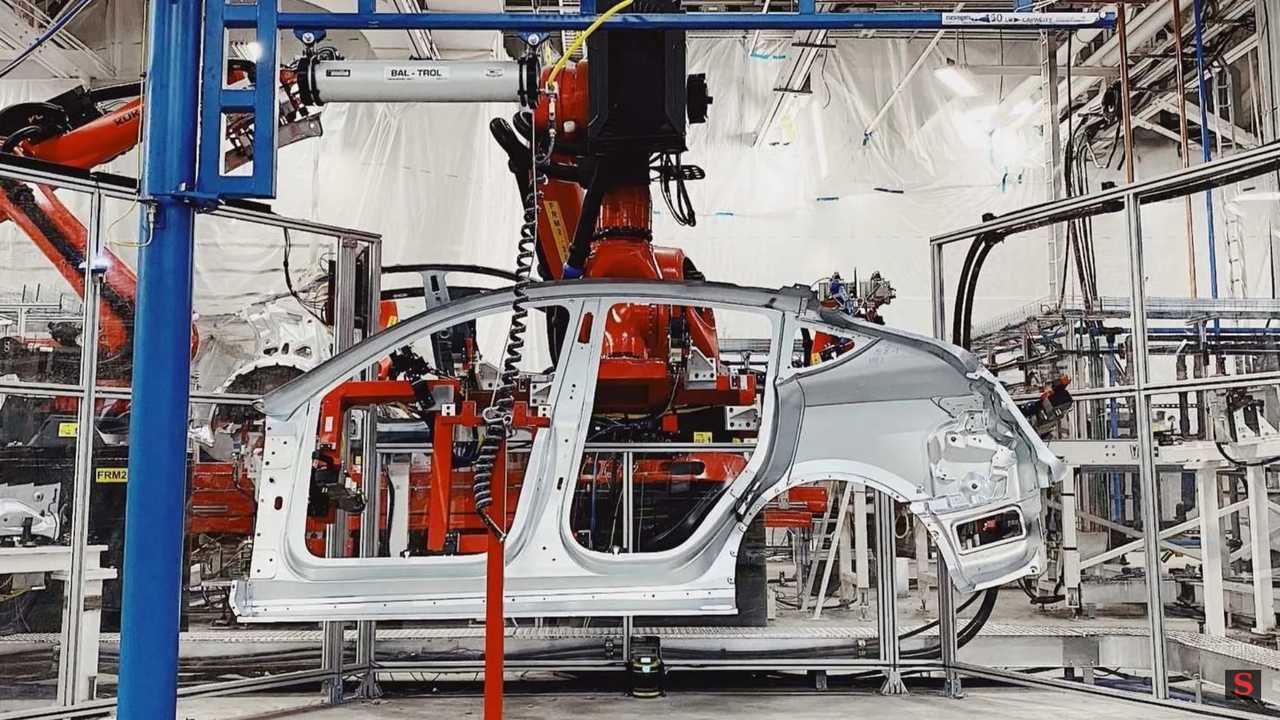 Even Coldren is not certain about the door frame and sills. He prefers to work with that as a possibility.

“Moving to the left, the grayish discolorations appear to be heat-related. Remember: in a casting method, molten aluminum is forced into cavities that form the shape of the various sections. Aluminum melts at 660 degrees C, or 1,220 degrees F, so pretty hot. A discoloration of some of the parts of the casting, depending on the cooling of the form, would not be unusual.

The farthest curved does look like a curve that has not gotten fully formed but is impossible to be sure.”

Going to the parts in which they agree, they are very much the same ones. Not only that inner side of the rear wheel well, but also side structures of the body and the struts that connect them, as you can see in the image below, made by Contet. 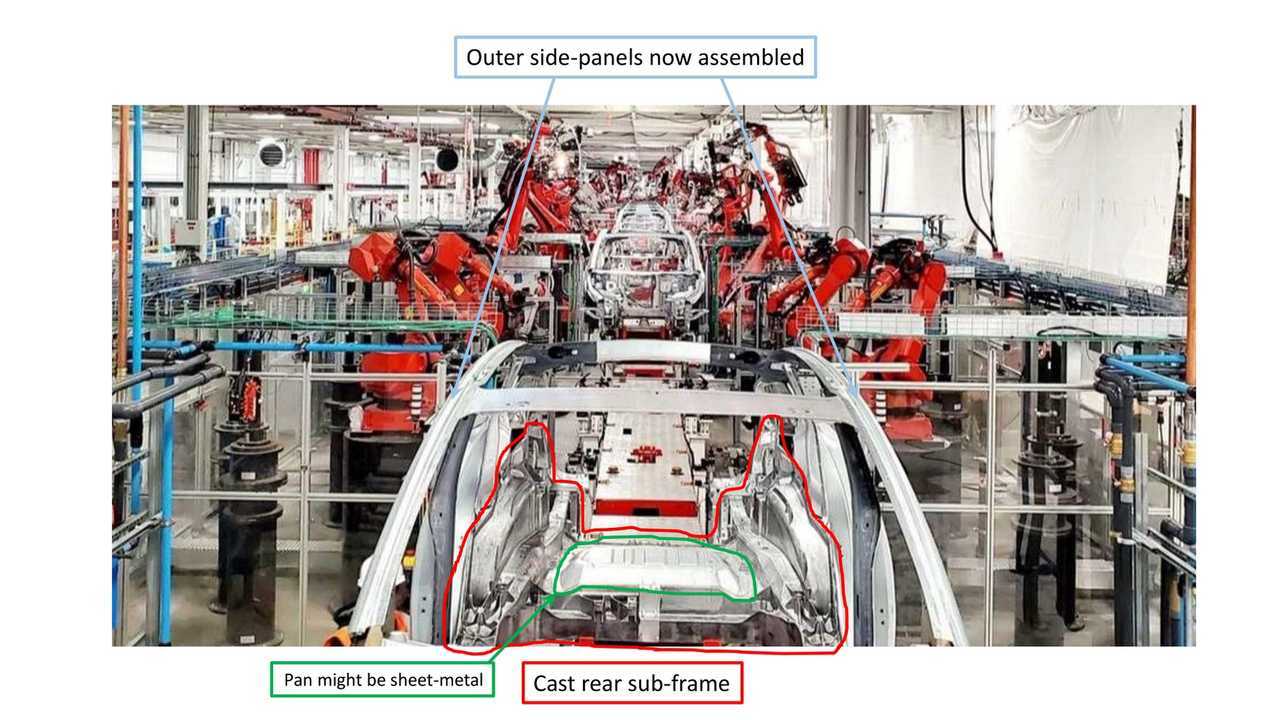 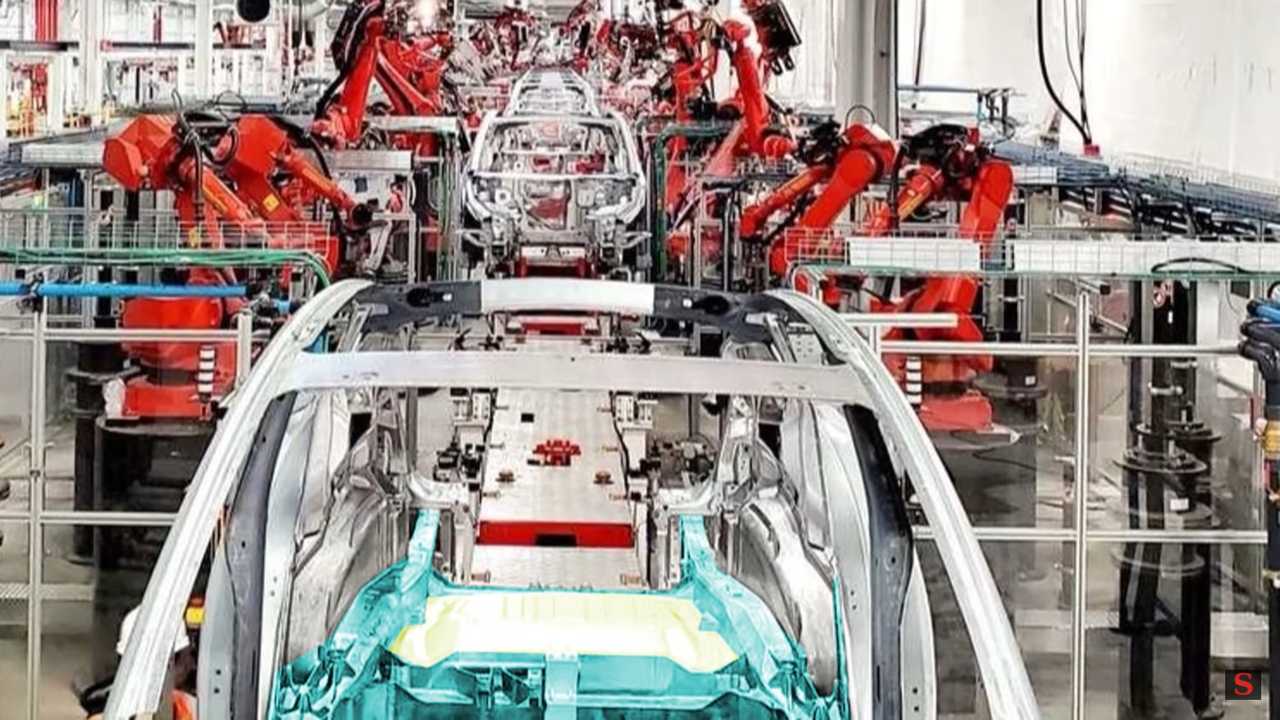 If you compare it to the one Thompson also presented in the video – do so with our tool above –and the image on the left among those Schaefer sent us, you'll see the three specialists agree with the cast parts that the Model Y will present and the reasons for them to be there. Contet talks about that.

At its front, it will interface with the battery pack, repeat the same at the front-end of the car and you’ll get a nice EV skateboard made of 3 main pieces stitched together for nice road-handling and five stars at the crash tests. Some competitor OEMs will use tubes, extrusions, and smaller cast parts instead of a big one, but with the same principle.” 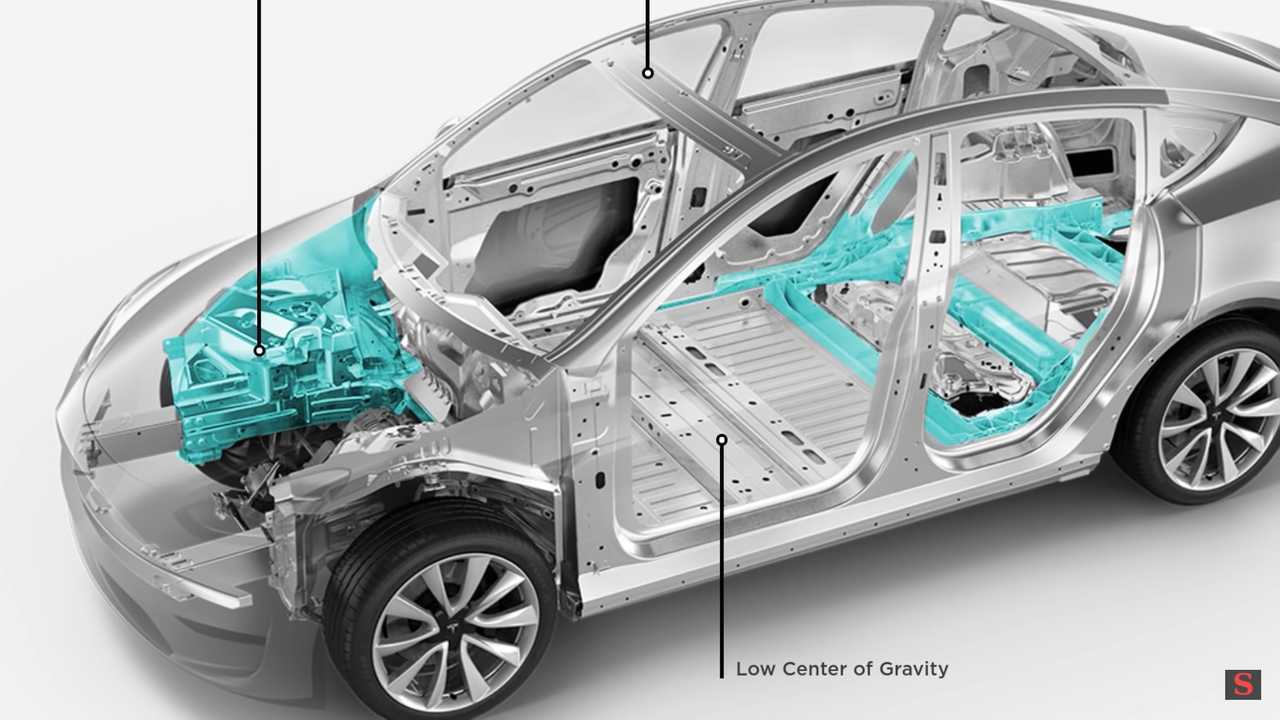 If other automakers also do that, but on a smaller scale, what is so special about the Model Y's cast parts? Contet also explains that.

“It’s a more extensive subframe than usual, going from side to side laterally and bumper to pack longitudinally. It looks like it’s made with high-pressure die-casting. That mold will be quite massive. To do it right and straight certainly qualifies as an advanced manufacturing method.” 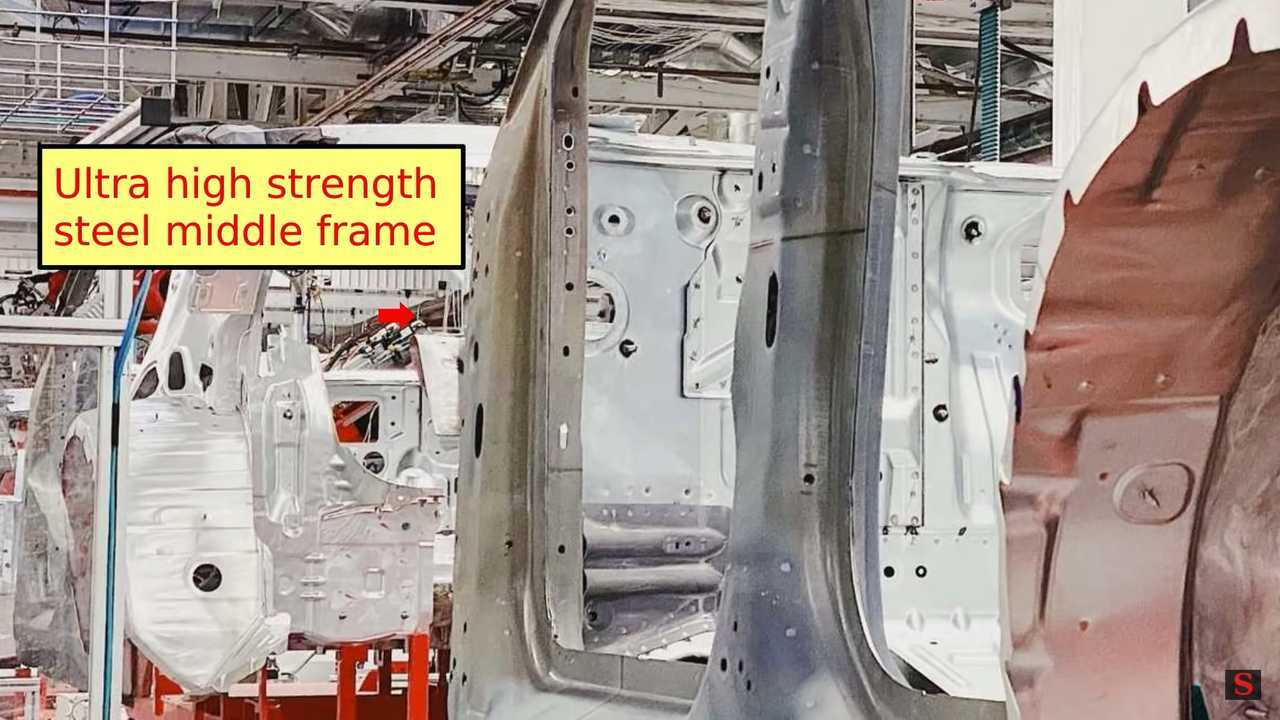 “Due to the location of the cast part, it’s probably used to attach the rear motor/drive assembly components and/or suspension components to the vehicle. I believe the cast part would handle the torque from the motor better than stamped components as it has ribbing for strength and stiffness which will keep the vehicle from twisting or distorting in this area on hard acceleration. Everyone knows Teslas have a lot of torque.” 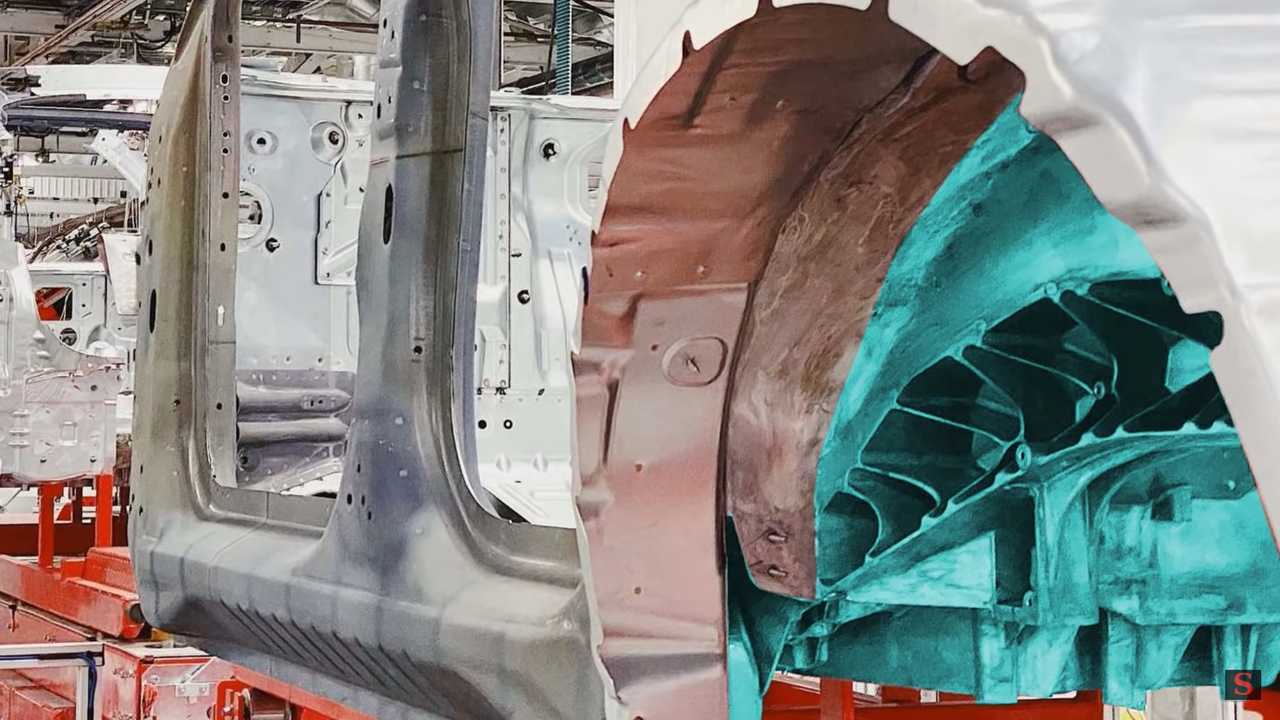 In other words, the cast parts have the purpose of being very stiff, but not to work as a crumple zone, as Coldren told us.

“Cast parts do not make for a ‘crumple zone deluxe!’ Cast parts don’t deform on impact, they crack into pieces.” 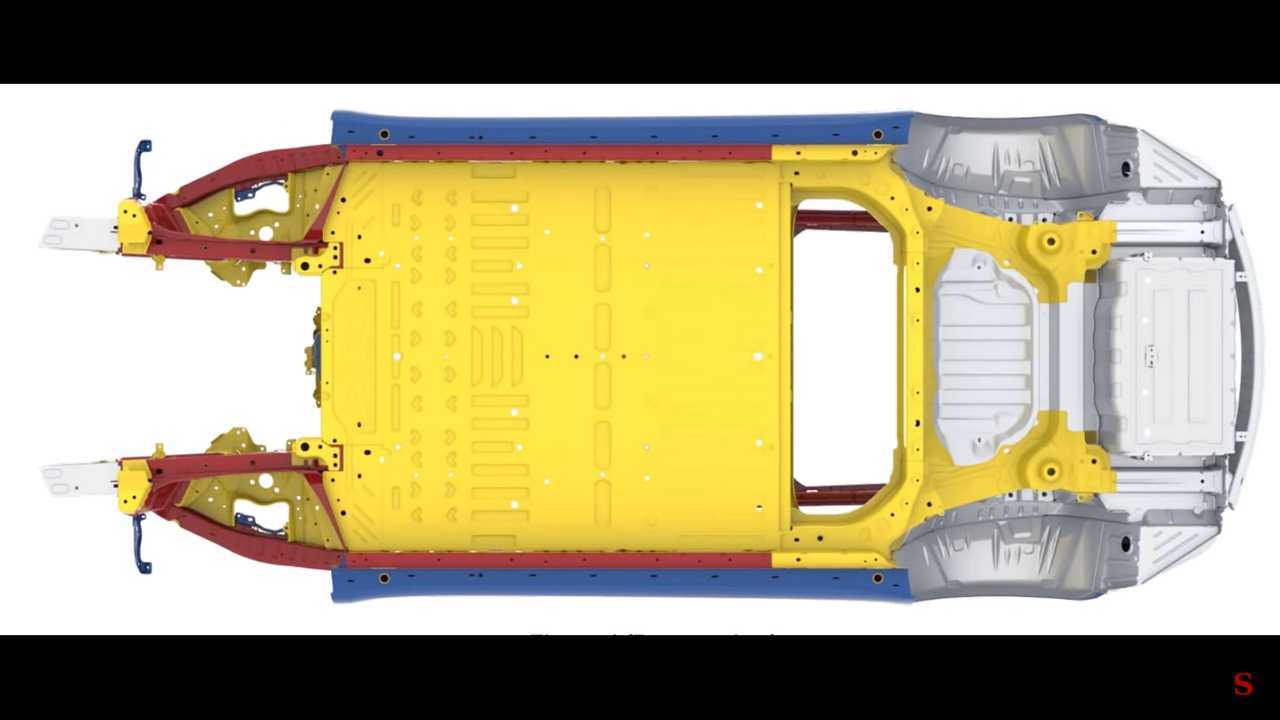 Schaefer also works with the possibility that the cast components might not be part of the body, but most images show otherwise. Anyway, as we do not have Tesla's official explanation, he is only cautious.

“If this cast part is part of the vehicle then I would assume there is another component that will be assembled over this part in the wheel well area shown on picture 3. I would think a cover component would be necessary to close off all the openings between the ribs to keep road debris from accumulating in the opens. A cover would also lower wind turbulence and drag in this area.

The second option is that the cast parts are not part of the vehicle but part of an assembly fixture to position the stamped panels during welding/assembly. I don’t believe this is the case but what makes me consider it is that in picture 3 the distance between the cast part and the stamped wheel well arc appears to be too narrow for a tire to fit in there without rubbing against something. Again, it’s really hard to judge the distance in this picture. Without pictures from other angles, it’s a guess at best.” 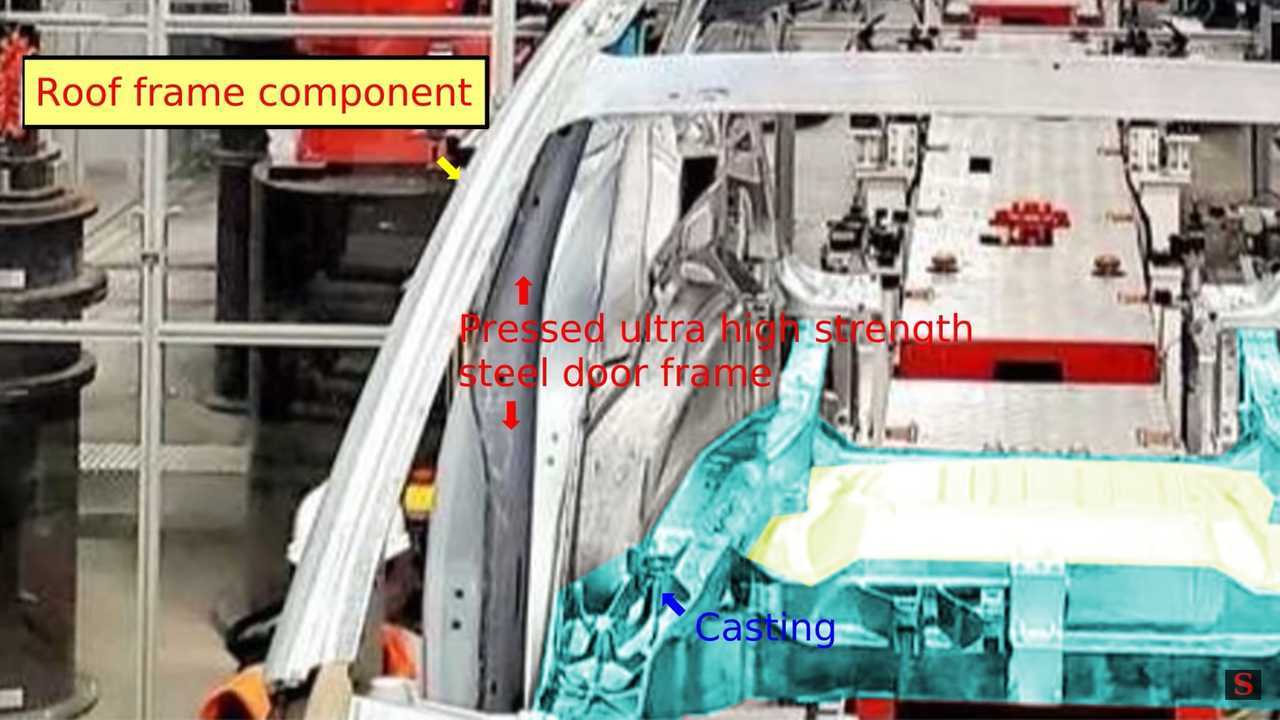 That said, these specialists see bigger cast parts than most automakers use, but they will not be used for the whole car frame for what they can see. Contet adds a relevant warning related to the patents we have shown, and that suggested that. And says a little something about the Cybertruck as well.

“Filing a patent does not imply you will use it. A patent gives you an exclusivity: you can exclude other people from using the invention. Many patents are filed every day purely in a defensive way. And I don't count all the ideas that work in the computer but are impractical to realize day in and day out repeatedly in high volume series production.

For Tesla's bottom-line, the CyberTruck is a lot more interesting: flat panels = no forming tools.” 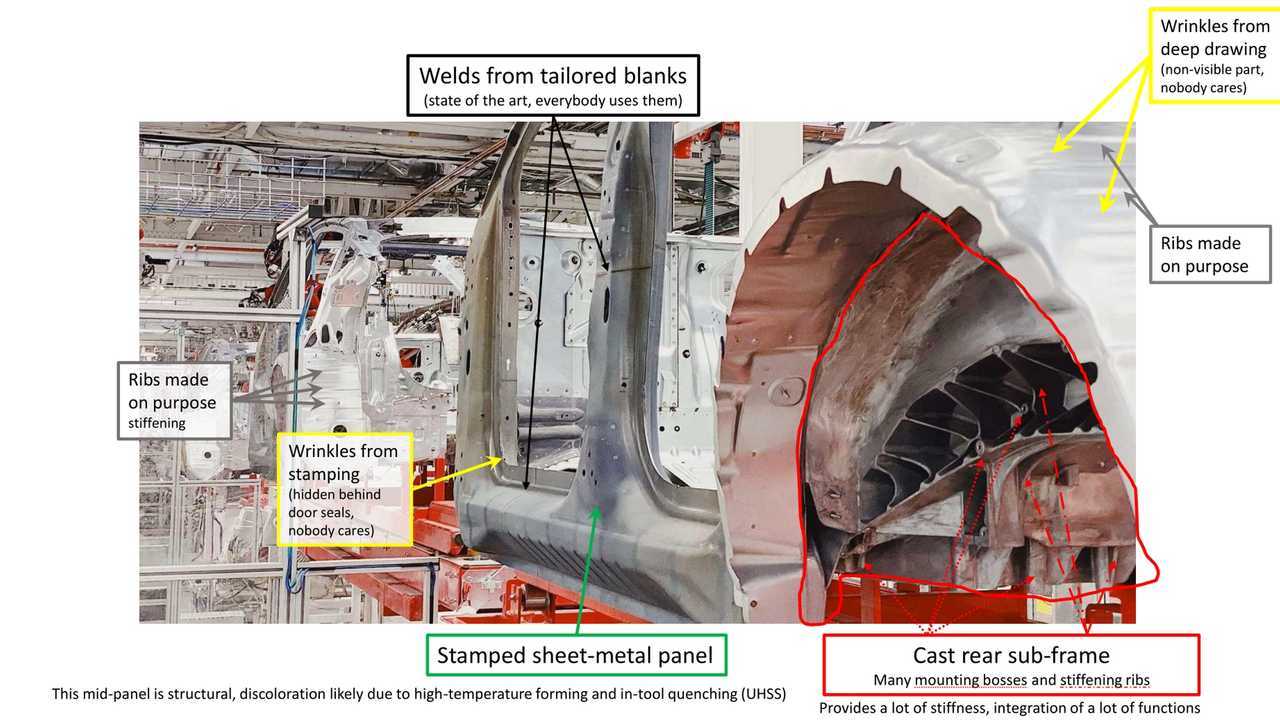 With the Model Y's "advanced manufacturing methods" clarified by these specialists, we will still have the Cybertruck as a manufacturing sphynx for the next few years. Thompson already gave it a shot at trying to understand how it will work, as well as Sandy Munro. If you have any idea about that which you would like to share with us, we're all ears!