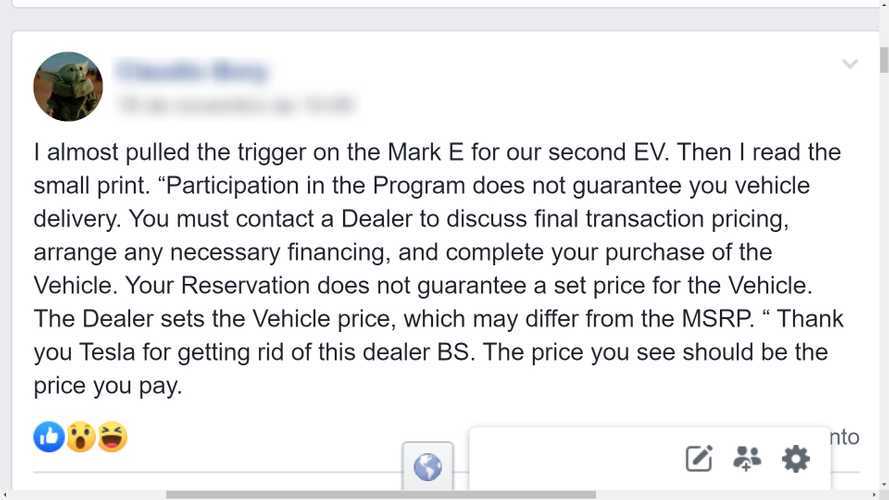 In a disruptive scenario, the load of a distribution network is not small.

This article was born from the post above. It is in a private Facebook group, hence the blurred data that could help identify it. Let’s call this person Little Yoda. He would give the new Ford Mustang Mach-E a go, but the fine print made him give up immediately. He does not like dealing with dealerships anymore. He wants to know online the exact price he will pay. He is a Tesla customer.

This is an example of why most mainstream automakers, including Ford, will still lag behind the EV manufacturer. It is not just a matter of technology: it is a business disruption. And that includes the dealership model.

Tesla could have done like every other automaker before it did. In many aspects, it has. It has set a production plant – now more than one. It sells its cars. But it did not look for entrepreneurs interested in selling them. Why, if the internet helps to do that in a more accurate and straightforward way?

That is so true that many states decided to protect the dealership business model by forbidding Tesla from selling its cars there. That only made customers buy their Teslas in other states and use the Supercharger network to get home in a maiden road trip. Or buy used ones. These states are only prolonging the inevitable.

If they really wanted to avoid this new sales model, they should have forbidden it everywhere so that no one would ever get in touch with it. Or think it was possible. After Tesla proved it is, the ones that tasted it do not want to get back to how it was.

Let’s imagine Tesla produced what it thought would sell and pushed those vehicles to a hypothetical dealership network to sell them regardless of what people wanted to buy.

If Tesla’s bet were right, it would have to produce more. If it were wrong, you would see the company resorting to incentives – not federal tax exemptions but rather discounts. They would be as big as necessary for people to think its vehicles were not a bad business after all.

It may once have made sense to do that, but not anymore. With a simple page on the internet, a carmaker can know precisely how many of those cars are going to be sold in a given month. That allows it to produce the precise amount that will be necessary. Why flood stores with something that has no demand?

Selling cars with incentives makes things even worse for dealers. On the other hand, if a car is much sought-after, they can charge as much as they want for it and make more money. Or just recover from selling cars with no profits or at a loss.

Dealerships are not to blame. They have bet on a business that made sense and put lots of effort into making it grow, but the truth is things changed. Why do you think Geely created Polestar or Lynk & Co? Volvo helps to explain: it created the Care By Volvo system and was recently sued by dealers. Ironically, they are from California, precisely Tesla’s home state.

The CNCDA – California New Car Dealers Association – said the mobility service Volvo proposed is nothing but leasing. And, if it is leasing, it “usurps the traditional sales role of Volvo dealer franchisees,” as the CNCDA petition reads. In other words, CNCDA thinks Volvo is competing with its dealers. And that it is selling its cars directly, only in a different way.

Polestar and Lynk & Co will never have this sort of issue. Polestar follows the same model Tesla has, including what it calls Polestar Space: a place where people will be able to see the company’s cars.

Other traditional carmakers will probably follow suit. To do anything similar to what Tesla offers, they will have to create new companies that have nothing to do with their current dealer networks.

Tesla started its career without this liability. It probably also decided not to have dealerships because it knows electric cars have the potential to avoid servicing in a way ICE cars never could. EVs have no liquids, oil, fluids, spark plugs, cables, timing, or drive belts to be replaced. They also have regenerative braking, which prevents pads and discs from wearing.

To handle the little stuff their cars would ever need, a few Tesla Service Centers would be enough. In some places, training shops that would like to work with these cars could be all that Tesla really needs.

A vital income source for dealerships is servicing. How could you promise a good deal to one of these entrepreneurs if their business was only selling cars? Being low-maintenance cars is probably the reason mainstream dealerships sell so few EVs.

Daniel A. Crane is an associate dean for Faculty and Research of Law at the University of Michigan. He wrote a complete article about dealer protectionism and Tesla that is worth reading. In short, it says all laws restricting direct distribution are examples of crony capitalism. This part is particularly interesting:

“The current alliance of manufacturers and dealers of internal combustion vehicles against the onslaught of EVs is hardly the first such instance in the history of the American transportation industry. For example, in the 1920s, the American Horse Association mobilized to block the spread of internal combustion technologies by lobbying for laws against heavy trucks on public roads and granting horses special legal status in urban areas.”

For as much as dealerships are a legitimate business full of hard-working people, they are the current American Horse Association. Little Yodas do not want to ride horses anymore. They want EVs.