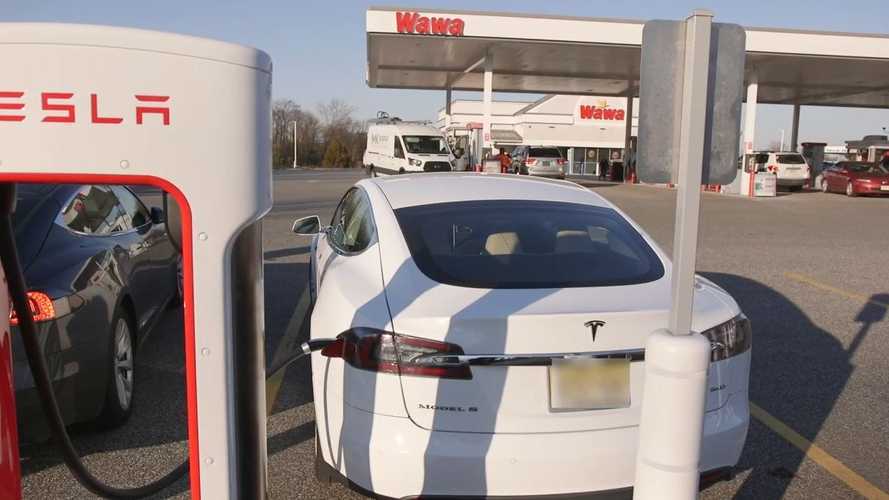 If you can't beat them yet, join them.

Tesla has disrupted a number of industries — automobiles, energy, and franchise dealerships (to name a few). And the pump might be next. Could the future of gas stations be electric?

It turns out that Tesla has teamed up with Wawa, known for its chain of upscale gas stations in the U.S. Wawa typically features a luxury fill-up experience in which customers are able to order anything from freshly made coffee to high-quality hoagies inside their large indoor shops. Wawa's unique experience works great for electric car owners, as their "fill-ups" generally take quite a bit longer than that of their gasoline counterparts.

Tesla's proprietary network of Superchargers has completely changed the landscape of electric car ownership. Any Tesla owner has the ability to travel across country with relative ease thanks to the convenience of Tesla's vast Supercharger network. And with Tesla's latest Supercharger V3 upgrade, owners now have the ability to charge their cars up to 80% in just 30 minutes or gain 150 miles of range in around 15 minutes.

Both companies have been experiencing rapid expansion as of late and are now working together to provide an ideal charging experience. There's already Tesla Superchargers installed at 16 different Wawa locations since 2017, but Wawa spokesperson Lori Bruce mentioned that the two companies are looking to double that number by the end of 2020 in a recent statement to The Philadelphia Inquirer.

Wawa isn't the first gas station chain to dive into the EV charging space, as BP recently acquired the UK's largest electric car charging company. Shell is also offering limited EV charging in Europe. As more car buyers transition to electric vehicles, it's likely more disruption will happen the fill-up space. And Tesla owners could be (as always) be the early adopters with this trend.

Above: Tesla Supercharger located at a Wawa location (Image: Plugshare)

Tesla is already closing in on the range of a traditional gas car. The Model S, with its 370-mile range, is an industry leader. But the average driver isn't likely to use a fraction of that in their daily driving. And most Tesla owners wake up every morning with a full "tank" from their home charger. Granted, as a Tesla owner you'll need a Supercharger for longer road trips. So why not stop at a Wawa to charge up and grab a hoagie on the way?