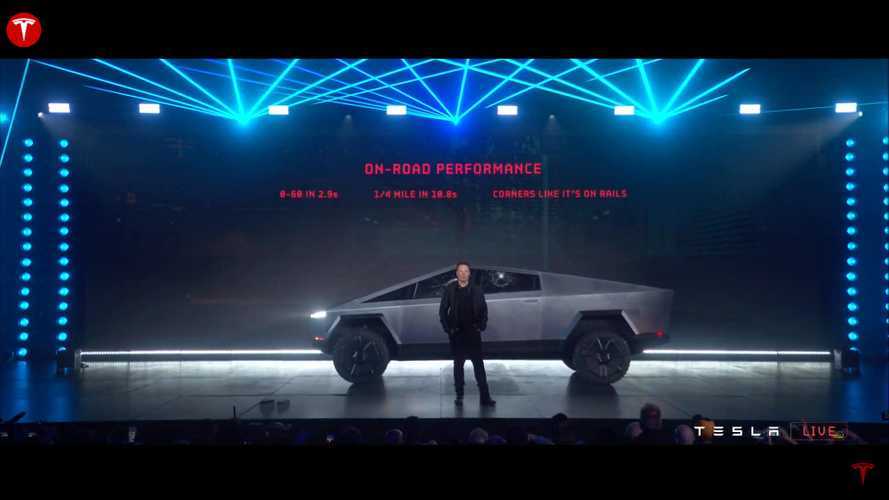 It will not tow nearly as much as Elon Musk promised, but we're okay with that.

The Tesla Cybertruck has impressive specs, but it actually tows far less than Elon Musk stated. That's okay though since it still out tows a Ford F-150.

The Tesla Cybertruck reveal showed a vehicle that will not have paint options or a traditional bed, but it will be able to tow 14,000 lb, to pull anything, according to Elon Musk, and offer its owners a 2.9 second acceleration from 0 to 60 mph. That is enough for the pickup truck to beat a Porsche 911.

Back to towing though. The Tesla Cybertruck falls 286,000 pounds shy of towing what Elon Musk said it would, but at a rated towing capacity of 14,000 pounds, it can out tow the mighty Ford F-150 and that's all it really needs to be capable of doing.

That said, remember what Musk had promised for it.

We still have no indication of the range this new electric pickup truck will have when towing anything. That was critical information, but it is still missing.

It is obvious that it depends a lot on what will be towed and how heavy it is, but the company will have to provide info on that, especially after towing tests with the Model X proved the range falls drastically. Anyway, if George Bower hits the nail in the head, it could have a 200 kWh battery pack. And that could help if travel a long way, even towing anything.

Elon Musk previously stated the truck would have 400 miles of range and the option for 500 miles. Anyway, rumors that it may be the first Tesla to have the million-mile battery pack may change that expectation. We had nothing on that at the event. Will those more resistant batteries also offer more energy density? Will they be at the same energy level?

Musk also said the pickup truck would have a dual motor configuration with all-wheel drive and “crazy torque.” Then Rivian came and said the R1T would have four motors. Tesla tried to beat that with three motors. It probably won't be able to perform a tank turn.

Speaking of the R1T, the Cybertruck managed to have a 0-to-60-mph acceleration time below 3 seconds, but we have no info on total power. Or if it has more than 700 hp. That is what Rivian promises for its electric pickup truck.

It would also be nice if we could know how much energy the pickup truck may lose by providing 240V power to tools, as Elon Musk also promised on Twitter. The unveiling did not provide the answers we wanted, unfortunately.