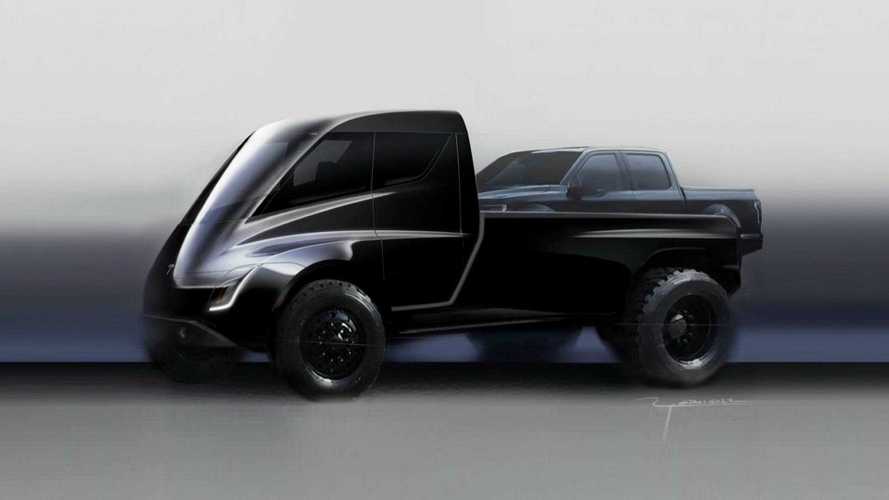 We don’t know much about the specifics of the Tesla Pickup Truck but what we do know was summarized in an Electrek article: Tesla pickup truck-Everything we know so far.

In order to run our performance model, we had to turn the above description into a set of specific assumptions. A brief discussion of some of the more pertinent assumptions follows below.

Battery size: 200 kWh with weight reduced 5% for further improvements between now and when the pickup is released by Tesla.

Size and Aero Drag: This should be simple right? It’s a “big” truck according to Musk, but big is a relative term. We used the F150 Raptor for our frontal area calculations. One could argue we picked too small. We’ve seen renderings of the Tesla pick up with an F150 in its bed. So, yes, I suppose we picked one too small but everything’s a compromise. Bigger just means more aero drag and drag force goes up with the velocity squared. More drag=bigger battery, so Raptor size seemed a good compromise.

Cd: We used the same as the Tesla semi=.36 since the shape in the renderings is similar to the Tesla semitruck. Also, Chrysler 1500 Regular Cab 4x2 has a drag coefficient of 0.360.

Weight: This was a tough one. We started with Raptor weight, took out the engine and transmission then added 200 kWh of battery. For battery weight, we used the density of the Model 3 battery pack and reduced it another 5% for improvements between now and when the pickup is released. Model 3 pack is 13.1 #/kwh. That put our 200-kWh battery at 2490# and the total curb weight at 7640# for the Tesla pickup. As a crude comparison, two Model S P100D’s weigh just shy of 10,000 pounds. One could argue we did not pull enough weight out of the Raptor, but on the other hand the Raptor is 1000# lighter than an F250 w/Power stroke diesel. Therefore, we rounded up from 7640# to 8000# for the Tesla pickup. So we are 2000# lighter than two Tesla P100D’s and a tad heavier than a Raptor (minus engine and transmission plus 200-kWh battery).

Tires: We used raptor tires= BFG 315/70 R17 All Terrain T/A K02 tires with 604 revs per mile. For a rolling resistance, we used .0126 coefficient. We made an effort to go on the high side with rolling resistance since the Raptor has a fairly aggressive tread. For comparison, a typical low rolling resistance class 8 semitruck tire can be as low as .006 coefficient. We use .011 for the 19” model 3 tires. We bumped that number up by another 15% to get the RR coefficient for the Tesla pickup truck. Perhaps a touch high, but we had to start somewhere.

Gear Ratios: Once we had tire size we could size the gear ratios based on an assumption of max vehicle speed and max motor RPM. Gear ratios selected have a big influence on the 0-60-mph times. We ended up with a 15-to-1 gear ratio with a vehicle top speed of 110 mph, so we are slightly lower than the semi gear ratio but quite a bit higher than the sedans. Also, we used the same gear ratio in both front and back ... probably not correct, but good enough for this stage of the game.

There are quite a few more assumptions that go into the model. A full list is presented below.

What do you think of the results. 200 kWh “feels right” to us. A 0-60-mph time faster than any other pickup on the street and 380 miles range is good.

How much money do you have?

Let us know if you have better assumptions or spot an error in the ones we have listed. We will keep your suggestions in mind for any future model refinements.