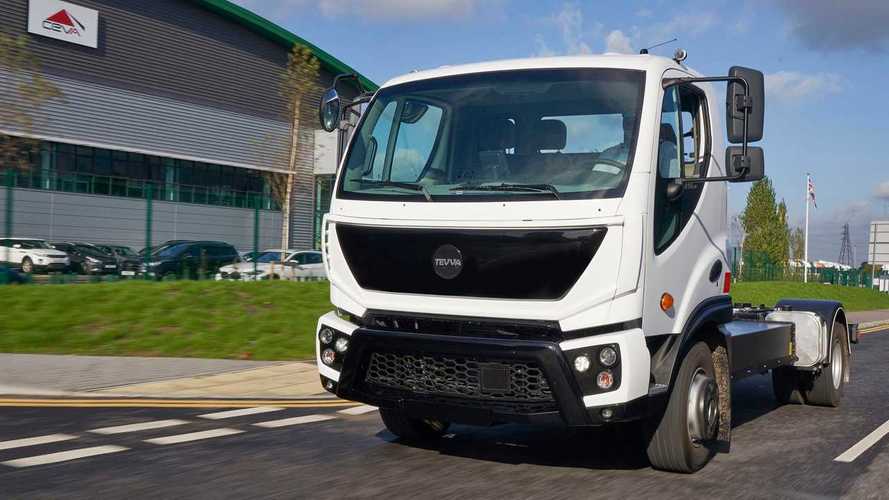 Tevva Motors announced a new program - Commercial EV Technology Fleet, which envisions the deployment of up to 50 electric medium-duty (12-tonne) trucks (all-electric with an optional ICE range-extender) in the UK and few other select European markets over the next two years.

The pilot initiative will enable businesses to rent Tevva's trucks for three or six months for evaluation, which sounds like a good way to demonstrate the product on one hand and educate/build confidence in customers on the other hand.

"The initiative is being spearheaded by seven companies based between London and Oxford who, as early adopters, are committing to being part of the first ELECTRIFY cohort and will be taking delivery of a collective total of eight eTrucks packed with Tevva’s ready-made EV solutions. Availability for future cohorts will soon open up."

According to Tevva, the demo fleet is expected to include around 50 vehicles, available for purchase from Q3/Q4 2020.

"Over the next two years, the ELECTRIFY programme’s 50 vehicles will be deployed across over 200 fleets in at least five countries, amassing an estimated 4 million km that will prove that businesses can save up to 20% on TCO but also have an environmentally effective solution."

"The co-liveried truck is rented by the customer, running an unlimited mileage deployment with the vehicle over the period of the demonstration, during which Tevva will provide detailed telematics data to show all operational elements, such as mileage completed, energy consumed, grid energy used and range extender fuel consumption vs energy generated.

Tevva will also provide customers with all necessary training for their technicians and drivers to ensure safety during the trial and optimise the benefits of the on-board technologies.
With the shared learning and data generated by participation in the ELECTRIFY programme, businesses can not only help prove the real-world performance of the technology to the wider market, but also benefit from the option to retain the vehicle at the end of the trial period and priority ordering and build slots for any further vehicles they wish to purchase.

Tevva’s proprietary technologies cover the battery pack, battery management, drive system and range extender and include a state-of-the-art vehicle control and telematics system which safely manages the vehicle and enables low running costs by optimising use of the battery and range extender."

“When Tevva was founded in 2013, the question that businesses were asking was whether or not electric trucks could displace diesel in the commercial vehicle sector. The question today is ‘when’ they will displace diesel.
“The electrification of the commercial vehicle sector is now inevitable and it’s now simply a question of how quickly it will happen. The answer is that it will happen sooner than most people think.

“The big players in the transport industry already see the benefits, opportunities and potential of technology like ours but too many businesses in the UK and across Europe still have a relatively low level of awareness. ELECTRIFY will enable a better understanding and increased adoption to accelerate significantly by proving beyond any possible doubt in real-world environments that logistics electrification technology is ready to displace diesel now.

“This is crucially important for the planet – the climate emergency is shockingly real and it won’t wait for industry to catch up, which is why we are doing everything we can to move things on with the alacrity required.”