The change in the owner's manual happened in May, just a short while after owners started complaining.

Why print an owner’s manual if nobody reads it, right? You prevent killing some trees for the unnecessary extra paper. In digital times, you can have digital owner’s manuals, like the one for the Model 3. It even receives digital updates, such as the last one this car had, back in May. Now, Tesla advises owners to take measures to prevent rust. Joni Savolainen started to complain about paint and rust issues with his car in April.

⠀ New Evidence Seems To Show A Tesla Model 3 Fender/Frame Rust Issue
Was This Rust Issue On A Model 3 Tesla's Fault? 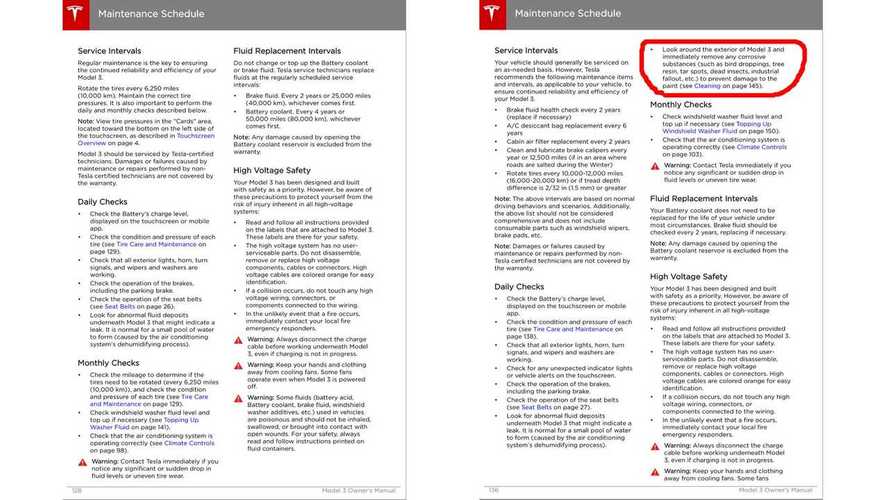 We have compared both manuals, one from before May 2019 and one from after that, to spot the differences between them regarding rust and paint problems. The oldest one – published in December 20, 2018 – has 184 pages. The most recent dates from May 16, 2019, and has 193 pages – or nine more than the manual it replaces.

At least one of these extra pages is due to a new paragraph on the Maintenance Schedules section. The new excerpt reads as follows:

“Look around the exterior of Model 3 and immediately remove any corrosive substances (such as bird droppings, tree resin, tar spots, dead insects, industrial fallout, etc.) to prevent damage to the paint (see Cleaning on page 145).”

When you go to the Cleaning section, there is a new paragraph there as well. And this one is even more explicit regarding what Tesla will do in case your Model 3 presents any sort of paint damage:

“Caution: To avoid corrosive damage that may not be covered by the warranty, rinse away any road salt from the underside of the vehicle, wheel wells, and brakes. After cleaning the vehicle, dry the brakes by going on a short drive and applying the brakes multiple times.”

There is no mention of bird droppings, leaves or anything similar on page 145, probably because it would be redundant. But it makes us wonder anyway.

Why has Tesla modified the manual about one month after the complaints about the paint issues started? Coincidence? The company has done the same by releasing software updates 2019.16.1 or 2019.16.2 for the Model S and X in May. In April, a Tesla Model S caught fire in Shanghai, apparently in a spontaneous way. Also on the subsequent month after the fact.

Why does the company mention the cars may suffer “corrosive damage that may not be covered by the warranty?” Is any corrosive damage covered? If it is, will the issue with the left front fenders that touch the frame and rust have coverage?

We’re still waiting for Tesla to answer our questions regarding all these issues. Roger-Pierre Gravel decided not to wait anymore and had his Model 3 entirely painted. He is now suing Tesla Canada for it to pay for the expenses.

If the company ever answers our questions, we’ll also ask about the owner's manual changes. The company could also reach us spontaneously. It usually does that when there is something to correct, which means they read us. Answering us is an entirely different matter.