Was This Rust Issue On A Model 3 Tesla's Fault?

Apparently not, since the car was already involved in accidents.

More than writing exciting news for our readers, we want to be accurate. That is why we are cautious, but sometimes we just take a few things for granted.

See this Tesla Model 3 rust issue, for example. The car’s owner is Matt Shumaker. He made a video saying his Tesla Model 3 started rusting in a very strange place. As if it came out of the blue. At the end of his video, he urges Tesla Model 3 owners to check that same spot for rust issues in their EVs. He just forgot to mention his car already crashed. Not once, but twice.

He mentions the accidents in the video above, right at the beginning. 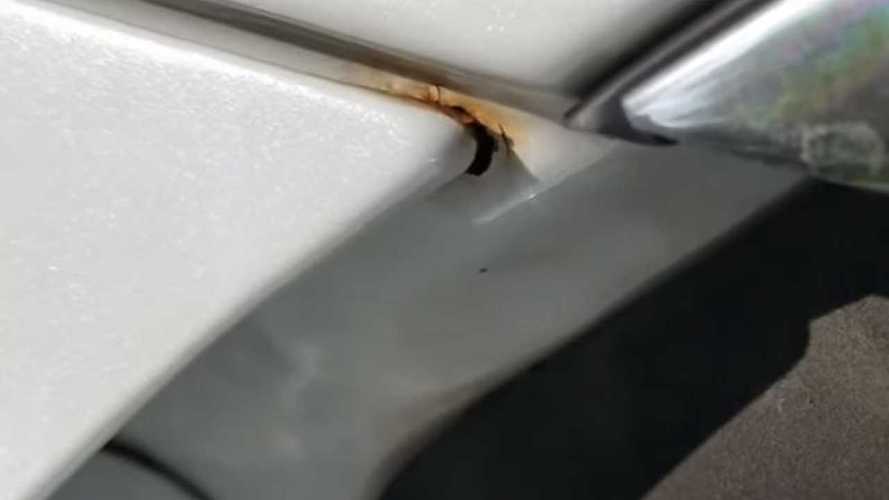 That changes the whole story. You cannot say that it is any similar to what happened to Joni Savolainen or Roger-Pierre Gravel, which had brand-new cars before they started presenting rust problems. In fact, it is not even related – apart from affecting a Tesla Model 3 and for the fact that it involves steel oxidation.

We have tried to contact Shumaker, but there is no email address or phone number available on his YouTube channel pages. Fortunately, it was not entirely necessary, since he has videos telling the whole story.

His first accident with the car happened when a driver hit the right back fender of his Tesla. The second one was a driver that reversed her car into his. That required a nose section job. The same shop made both repairs all at once, and it took them nine days to get all problems fixed. It was Custom Classics Auto Body & Restoration, in Island Lake, Illinois. It is not a Tesla-approved external body shop, according to Tesla's website.

The reversing accident clearly affected the left front fender of the Model 3, possibly pushing it against the body structure, even if slightly. That was enough to expose the steel and make it start to rust.

Shumaker likes to say he is an experienced driver that puts a lot of miles in his cars' clocks. That said, he should have thought about that. His video should have mentioned the previous issues, especially for the ones that were not aware of his former content – our case. That would be a great way to get people to watch his older videos. We eventually did, but just to get the facts straight.

The way it was presented, it seemed like an issue that started all of a sudden. His recommendation for other Tesla Model 3 owners to inspect that area implies he thinks it could be a production issue – one that could affect many more units apart from his.

As far as we know, that would be the case just for Model 3 cars that hit or were hit on the front. At best, it may lead to two discussions. The first is whether the design makes the fenders touch the car structure in a small frontal impact. The second is what a body shop should inspect when repairing a Model 3 with a similar accident. Perhaps the fenders move a bit.

Unfortunately, Tesla follows the path of mainstream manufacturers very often. It has tried to exempt itself from responsibility with the paint issue on Savolainen’s or Gravel’s cars. It also did not clarify if its software updates 2019.16.1 or 2019.16.2 for the Model S and X had to do with the Shanghai fire. And it's being sued because of that. Last, but not least, it only answers our questions when it wants to. Call that transparency.

But this rust case is definitely not in its account. Unless a judicial investigation determines it was. We would write again about this "oxidation episode" if any procedure of this sort ever happens. In other words, with new evidence. The one we now have says it’s case closed. And Tesla is not guilty.