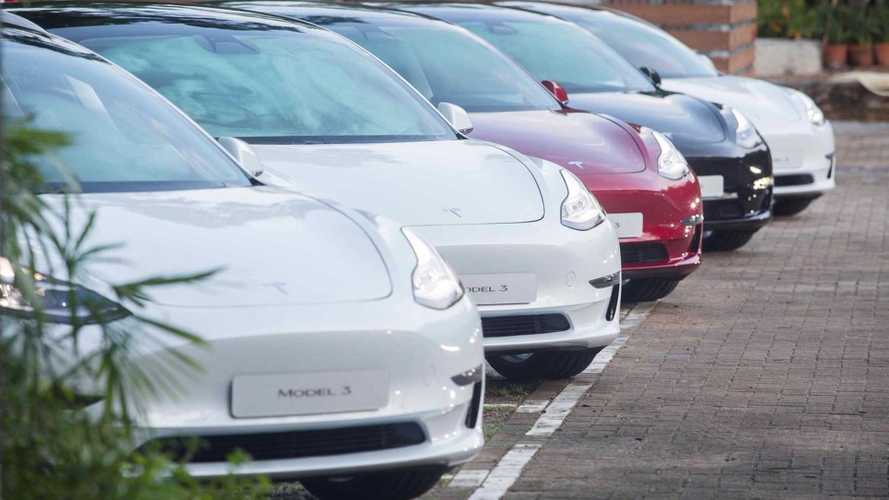 Each month InsideEVs tracks all plug-in EV deliveries for the U.S. by automaker. What will September 2019 bring?

And, so it begins with Mitsubishi Outlander PHEV sales. We'll be reporting September 2019 EV Sales beginning Tuesday, October 1 and continuing throughout the rest of the week.

Latest Editor's Update: At this point, it appears we won't have a reliable method for reporting monthly sales figures for some models going forward. While many are not models that make a huge impact on our monthly sales chart, but may in the future (i.e. Hyundai, Kia, Porsche, Subaru, Volvo), some do, like GM and Ford. We're also learning that other sites are now estimating numbers from these automakers without exposing that and/or not sharing them at all.

With that being said, we are looking at moving to quarterly reporting as a whole. However, if we ultimately choose to go that route, we'll still publish several articles every month showcasing data gleaned from automakers that do choose to report. So, we'll have a number of articles about deliveries of each "chart-topping" EV, as well as a simple recap and chart that reveals the top models' gains/losses MoM and YoY.

At any rate, we'll publish an article soon with further details about what to expect. Our team is still hard at work in an attempt to get representatives from these automakers to provide us with the data that is expected. Cross your fingers for us that we can make some headway here.

In the meantime, we really hate to have incompleted charts for August and September. So, being that we have little data or information to go on, we decided to pool all of our resources, in addition to taking an average of the last 12 months, to finish those charts with the most "reasonable" estimates we can offer at this time.

As always, thank you for the continued support!

Editor's note on Tesla estimates: Tesla had a strong quarter, hitting a new delivery record of 97,000 units. Although for our personal expectations, it came in a bit short in the Model 3 department. We were expecting just shy of 100,000 units delivered globally, and the disparity was entirely due to Model 3.

The X and S slightly beat our expectations, which was a welcome change of pace for 2019, as we've seen otherwise as of late.

The first quarter of a new market launch is always difficult and more likely to require some adjustments at the end of the quarter. So, we have updated our U.S. sales chart to account for the lower than expected global Model 3 numbers and the higher than anticipated UK and Australia numbers.

So far, European deliveries are looking solid for Q3 according to EV-Sales. Meanwhile, by most accounts, Model 3 numbers in China continue to underwhelm as Chinese consumers await the first production at Gigafactory 3. While we will not have a better picture of global deliveries for some time, we will make further adjustments if needed once more numbers come in.

It's important to note that despite the increasing difficulty with estimates due to overseas Model 3 deliveries, we were still well within the 5-10% that we aim for. And, as has always been the case in the past, we will freely provide full disclosure in the event that we have to adjust our numbers.

Keep in mind that the minimal changes in our estimates don't change any of Tesla's vehicle sales rankings on our chart or disparage the incredible role the company is playing in leading EV adoption. Vehicle deliveries are not the only metric for company success, but nonetheless, in the EV space, Tesla remains ahead in an almost abnormal fashion.

We don't profess to be perfect, and we have no intent to mislead. This is especially true since InsideEVs has no stock interest whatsoever. We just work hard every month in an attempt to provide the best numbers we can, and we avoid all contact and suggestions from Tesla supporters, as well as Tesla detractors, since the information from both groups is agenda-biased. We assert that our numbers are heavily researched and as close as possible to reality.

Keep in mind that we're still in the process of switching to a new, more reliable data system. We hope to have it in place going into Q4. For the time being, you can expect some delivery numbers to publish later than expected or not be entered at all (specifically Ford, Kia, Hyundai, Volvo, and Porsche). GM sales data will be added at the end of the quarter after the automaker releases its official report.

Note that BMW no longer gives model breakdowns or a final EV number, but rather a percentage decrease YoY, which has been huge in the last few months. So, while our model breakdown is estimated, the total checks out officially — it's important to note the i3 and i8 numbers are correct as reported.

Similarly, Mercedes provides IEV with a "total" number of plug-in vehicles sold for the month. So, we use our resources to glean model-specific sales. With that in mind, note that while model numbers might not be spot-on, the totals are verified by the automaker.

With all of the above being said, rest assured that we'll still provide Tesla delivery estimates each quarter, as well as sales numbers of many other models that are officially reported by automakers on a monthly basis. Hopefully, as the new process unfolds, we'll have better access to more reliable monthly EV sales data.

Nissan LEAF Sales Up Slightly In August 2019 In U.S.

Editor's Note: Live scorecard updates may lag depending on your device, settings, and browser. You can try refreshing the page, but it may be faster to close out InsideEVs and reopen the site. This is because your device and browser may save cache, so it may not choose to "see" the updates quite as quick as we're able to provide them. As always, let us know of any issues going forward.

In addition, it appears the chart is not showing up on some browsers in AMP (Accelerated Mobile Pages). If that's the case, just remove "amp" from the URL or go to the website and access the "normal" page.

Thank you again very much for your continued support!

If you'd like to access any of our previous monthly report cards, click here for the full archive. In addition, for those who appreciate visuals, every month we will also provide an article with sales and market share shown in various charts.

InsideEVs tracks all plug-in EV sales/deliveries for the United States by automaker and brand. Additionally, readers can find all historical EV sales charts for the "current generation" of electric vehicles by clicking here.

We use the words sales and deliveries synonymously. For a car to count as SOLD, an owner must buy or lease it, take DELIVERY, and have it in his/her possession.

Also of note this September:

Click here for a deep dive into our estimates and methodology.

The current year/month chart and graph are included below.