Tesla has definitely kickstarted its end-of-the-quarter push to increase sales. According to reports, Tesla is now offering free Supercharging benefits and some discount opportunities on certain models. Then, Electrek got hold of a leaked email from Elon Musk saying, "We have a shot at achieving our first 100,000 vehicle delivery quarter, which is an incredibly exciting milestone for our company!"

Tesla Is Expected To Deliver Record 100,000 Cars This Quarter 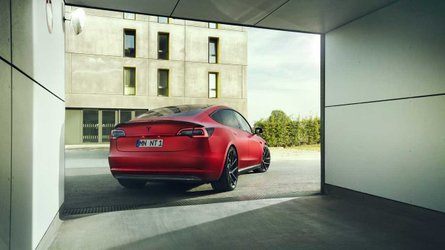 Above: A fleet of Teslas (Photo: Casey Murphy, EVANNEX)

Could this vehicle delivery milestone really be achieved? It turns out Tesla delivered a record 95,200 vehicles during the second quarter of 2019. And it's certainly likely the company will try to pull every possible demand lever to surpass Q2 sales figures and break the barrier of 100,000 units.

With 158,000 units delivered during the first half of 2019, delivering 100,000 units in the third quarter would represent a significant step forward for the Silicon Valley automaker. It will go a long way in helping Tesla achieve its delivery target of 360,000 to 400,000 units for 2019.

The higher Tesla’s Q3-19 sales numbers, the lower the pressure will be in Q4-19. Apart from proving a positive sales trend in Q3, strong deliveries has another desirable side effect: better margins. A steady ramp is always better than an up-down ramp that places enormous pressure on the company's vendors in the supply chain.

Above: In 2017, Tesla only delivered 103,000 cars in the entire year. Less than two years later, the company could deliver close to 103,000 cars in a single quarter (Instagram: thespring.io)

Tesla has indicated its desire to balance sales over the duration of the quarter instead of peaking at the end of the quarter. Nevertheless, it could prove difficult for Tesla to achieve such a balance. Tesla's signature end-of-quarter push has one huge benefit, and that’s margins.

By keeping discounts limited to the last few weeks of the quarter, Tesla can improve the ASP (average selling price) of its cars and adjust prices downward only when it feels the need to push demand higher. This could be why Tesla’s sales numbers tend to peak at the end of the quarter — and it's likely that Q3-19 won’t be any different.

Tesla’s third-quarter prospects were further brightened by China’s decision to offer a purchase tax exemption to the electric car maker.

According to CNBC, the exemption has reduced Tesla's prices by a massive $14,000. Such a large drop in price is certainly bound to increase sales.

“The lowest-priced standard-range version of that car, which sells for 364,000 yuan (around $51,000) is Tesla’s most popular in China. Orders spiked after Beijing gave dozens of electric vehicle makers there a healthy tax break earlier this month. The 'purchase tax' exemption lowers the cost of buying a Tesla in China [by] around 99,000 yuan (about $14,000).” - CNBC

And early indicators in the region appear to be upbeat, according to Barron's. An analysis of insurance-registration data from investment bank Piper Jaffray suggests Tesla’s China deliveries were up 175% year over year in July and August.

Analyst Alexander Potter concedes, "Teslas are among the only electric vehicles (EVs) that consumers actually want to buy — even in a market like China, where EV models are commonplace."