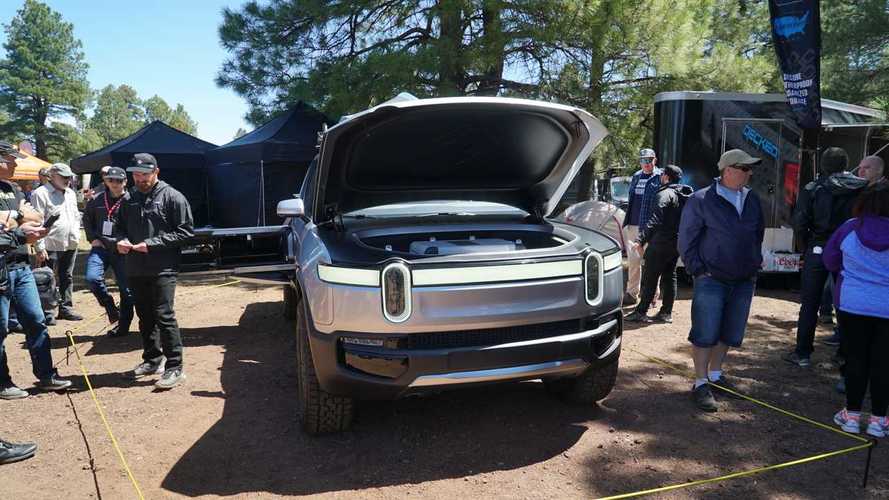 InsideEVs was on the scene to capture Rivian's Overland Expo debut.

Compared to other vehicles on display at the Overland Expo West, Rivian’s ride is quite tame yet ft's still fully functional as a full-service off-roader for a weekend camping getaway.

A bed-mounted tent with an access ladder provides cozy off-the-ground sleeping accommodations for two, while a roof rack offers extra storage for gear. These are both rather common items for overlander. However, the Rivian R1T electric truck has a trick up its sleeve (or rather, in its massive storage tunnel).

It's in that storage tunnel where its custom slide-out kitchen with storage for food, counter space, and an electric stove resides. Even more impressive is that it's powered by the truck's battery. Rivian says the battery is big enough to provide a week's worth of cooking while only consuming 11% of the packs total 180-kWh capacity.

Exploring the terrain, however, will use up the battery's juice much more quickly, especially since Rivian pegs the R1T as having a combined 750 horsepower (559 kilowatts) from four electric motors. Its range is estimated at 400 miles per full charge, though that's highly dependent on where and how it's driven.

Check out these new live images of the Rivian R1T electric pickup truck from its Overland debut. That pull-out kitchen is surely impressive.