The Tesla Semi Truck Is Actually Delivering Cars To Customers 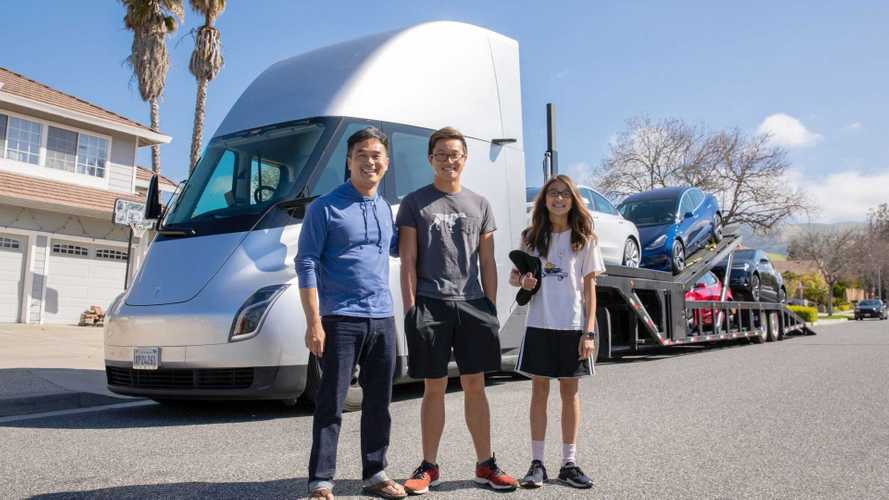 We've seen the Tesla Semi hauling cars, but now it's officially taking them to owners' homes.

Recently, Tesla shared a few videos of the Tesla Semi truck being shown as a car transport carrier. Now, the prototype is actually delivering cars to real customers in the latest footage and photos shared by the Silicon Valley-based automaker.

With its seamless ability to move cargo, Tesla's Semi has proved it is actually 'capable' to do what it was created for — carrying large objects (like the company's own cars) in a zero-emissions truck turns out to be a treat for the entire EV community.

In this latest vignette, Tesla customers awaiting delivery of their cars appear surprised (and delighted) to receive their vehicles via the Tesla Semi, the smile on the customer's face tells the whole story.

In the video and photos below, we can see that the trailer carrier is loaded with three Tesla Model 3 vehicles and a Model X. Performing admirably, it seems like the trailer was tailor made for this purpose.

Above: The moment of surprise when a Tesla customer gets his car delivered by the Tesla Semi Truck

Tesla's much anticipated Semi Truck could signal the future of the freight industry — Fortune 500 companies and corporations have already placed hundreds of pre-orders for these futuristic trucks.

The Tesla Semi appears to be fully capable with autonomous features as prototypes are said to be equipped with around 26 cameras, the giant battery of the Tesla Semi, the capacity of which is unknown at this time, is charged via 4-5 Supercharger stalls at once. However, with Tesla's Supercharger V3 advances, this might change or Tesla could be working on a wholly separate Megacharger for it. No one knows how the (final iteration) of charging for the Semi will unfold at this stage.

Regardless, let's take a look at the experience of these Tesla owners receiving their cars via an electric truck from the future.

Written by: Iqtidar Ali. An earlier version of this article originally appeared on X Auto. Images/Video: Tesla
===Above: A unique experience for a Tesla customer receiving his vehicle through the Tesla Semi Truck. Click/Tap images for high-res version in new tab.