Check Out This Amazing Look Inside The Tesla Fremont Factory 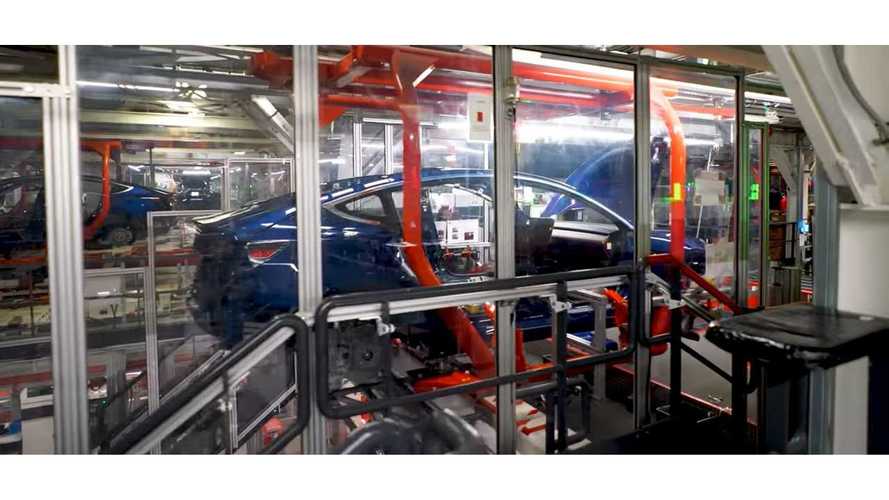 A FASCINATING LOOK INSIDE TESLA’S FACTORY

CleanTechnica recently received a rare invitation to visit Tesla’s automotive factory in Fremont, California, and made the most of it. Not only did Zachary Shahan, Chanan Bos and Kyle Field get a great scoop (and some splendid video footage) with their extensive tour, but the resulting article eloquently explains how the things they saw on the production line relate to the various ways in which Tesla is revolutionizing the auto manufacturing process.

Check Out A Flyover Of The Tesla 'Tent' And Fremont Factory

Above: Outside Tesla's factory in Fremont, California (Source: True)

“Tesla is taking over Fremont,” writes Kyle Field. The kilometer-long factory is just the center of Tesla’s empire - a seat factory and several other smaller facilities cluster in the area.

On the Model 3 General Assembly lines, where the painted body of the car is equipped with interior features - wiring, carpet, dash, monitor, center console, seats - Tesla has used automation to eliminate ergonomically difficult tasks and the need to lift heavy or awkward parts, Field writes. Tesla famously struggled with the balance between automation and human effort in the early days of Model 3 production, but it now seems to have developed consistent criteria for when to use humans and when to use robots.

“Tesla found that machines are great at working with parts that are always the same size and in the same place, like metal, bolts, batteries, battery packs, hard plastics, and such,” Field writes. “When it comes to working with fabrics, belts, wires, and the like, humans are better.”

The system that controls the whole intricate dance is Tesla’s Manufacturing Operating System, which was built completely in-house, and has evolved to support nearly all of the company’s manufacturing equipment. “The custom-built operating system has allowed Tesla to fine-tune its equipment and processes,” Field writes. “It clearly comes at a cost, as every change must be vetted and developed internally, but the upshot of the additional internal complexity is flexibility. Tesla can quickly come up with a new improvement or change to its products, equipment, or centerlines and implement it before another automaker would even be able to get a formal proposal together to send to a vendor.”

Field notes, as others have, that Tesla doesn’t pretend to have reached the pinnacle of auto manufacturing (Toyota might have something to say about any such claim). His team saw some bug-fixing going on: “Temporary engineering workstations were set up in the middle of the production line to troubleshoot the equipment. I noticed a line of partially finished vehicles had been pulled out of the production flow for body shaping issues to be corrected before moving along to painting. The factory, like every other factory I have visited, is a living, breathing entity.”

Above: A look at the Tesla's factory staff and impressive robots on-site working in unison to produce cars (Youtube: CleanTechnica)

While Tesla is far from perfect at manufacturing, it is improving both its products and its manufacturing process at an unprecedented rate. “We heard and saw this play out time and time again throughout the day,” says Field. “Tesla is constantly improving. Every day, its seats are getting better than the day before. Each and every day, its software is improving, iterating, evolving. Its welding has been tweaked, its battery chemistry is constantly being refined, battery module designs change, chassis, safety, steering, power output...you name it. That’s why Tesla doesn’t have model years for its vehicles. , Tesla is producing a different car than it was producing a week before.”

Not only the cars, but the production lines are subject to this relentless fine-tuning. Tesla’s massive Schuler stamping press can stamp out body panels for Model 3 even faster than the rate claimed by the manufacturer, thanks to improvements made by Tesla. After installing the press, Tesla’s engineers analyzed every part of the machine and made a few key changes, including redesigning the conveyor system, that allowed throughput to be improved by some 16%. Field explains, “Tesla can now produce body panels and stampings from the Schuler press at twice the rate as its Model X stamping press line and a mind-boggling four times the rate of the older Model S production lines.”

In the body shop, where the various body parts are assembled into a finished vehicle frame, robots rule. Because it involves rigid parts and repetitive tasks, the body shop is all about automation. Tesla told CleanTechnica that the Model 3 body line is 90% automated, with over 1,000 robots. Some 47 of those robots work on a dozen inline scanning stations that measure 1,900 points in every auto body to ensure that Tesla’s embarrassing problems with panel gaps are increasingly a thing of the past.

CleanTechnica also went down the street to visit Tesla’s seat factory. Tesla’s decision to manufacture its own seats flew in the face of current manufacturing gospel, and some in the auto industry thought it was crazy. But the company did it simply because it wasn’t satisfied with the seats on offer. The vast majority of auto seats come from only four companies, and Tesla “needed higher quality, lower cost, and more flexibility than the suppliers could provide.”

Above: Model 3 seats are produced in-house by Tesla (Source: Tesla)

The seat factory is just one example of Tesla’s iconoclastic strategy of vertical integration, which is precisely the opposite of the way automakers have been doing things for the last few decades. In a second article based on CleanTechnica’s factory tour, Kyle Field explains that “the 1990s and early 2000s saw companies around the world extending their supply chains into global markets in a way that the world had never seen before. The business models that emerged from the outsourcing movement were spread far and wide, with central organizations extending some semblance of control of their supply chains through quality spec sheets, service level agreements, and detailed supplier contracts.”

The automotive industry may be the most extreme example of this outsourcing trend - supply lines stretch around the globe, and some automakers even outsource the final assembly of their vehicles. To take one example, the “American-made” Chevrolet Bolt sources only 26% of its components from the US and Canada - some 54% come from Korean supplier LG.

Ironically, Tesla was originally built on this ability to mix and match components from around the world and avoid the expense and specialized expertise required to develop parts in-house. Co-founder Marc Tarpenning explained the reasoning to me in an interview for my history of Tesla: “We quickly convinced ourselves that we could make a compelling electric drive. That’s Silicon Valley stuff - computers and batteries. But I was extremely concerned with our ability to actually make a car, because there are thousands of components and it just seemed like that was impossible. What I learned...was that the car industry had sort of re-factored itself starting in the 70s, and that they had essentially gotten rid of everything except a couple of core things...almost all the components come from other companies. So, that was what convinced me that this business was actually possible, because we could buy from those same suppliers.”

Tesla used this strategy to build the Roadster, installing its powertrain into a modified Lotus Elise chassis. Elon Musk later called this “an incredibly dumb idea.” In a 2012 interview, he mused that “it was like you wanted to build a house, couldn’t find the right house, so you try to fix an existing house and end up changing everything except for one wall in the basement. It would have cost way less to just level the house and start from scratch.”

Above: More than a decade ago, a look back at the early days of Tesla's original Roadster in production (Source: Tesla)

Tesla’s definitive conversion to the gospel of vertical integration took place during the dauntingly difficult development of Model X. Sourcing thousands of components from hundreds of suppliers inevitably led to delays, which turned into a debacle. As EVObsession’s James Ayre and others wrote in 2016, depending on suppliers was a major factor in the frustratingly slow Model X production ramp-up. This hassle, and the resulting PR nightmare, “taught Tesla a valuable lesson about global supply chains, supplier validation, and perhaps most importantly, the value of not being afraid of just doing things yourself where it makes sense to do so,” writes CleanTechnica’s Kyle Field. “This thinking has led to a completely new type of vehicle.”

“I think we’re actually going to increase the amount of vertical integration that we have,” said Elon Musk in May 2016. “I think it’s very important for us to have the ability to produce almost any part on the car at will, because it alleviates risk with suppliers...If 2% of suppliers aren’t ready, we can’t make the car. Having the ability internally to adapt and make that 2% of parts internally really massively reduces risks associated with the production ramp.”

Kyle Field notes that producing seats at Tesla’s spread in California means paying relatively high wages, but the labor costs are offset by lower transportation expenses, as seats are no longer being shipped around the world. (Tesla currently employs a fleet of diesel trucks, but there’s talk of an underground tunnel).

Our economics professors weren’t wrong when they cited the auto industry as an example of “barriers to entry.” Building cars is tough. Arguably, it’s only Tesla's relentless improvement of its vehicles and its manufacturing process that have allowed it to compete with the big boys (and beat them - Model S has been outselling the legacy automakers’ best sedans for some time).

Above: Part 1 of a multi-part series from CleanTechnica behind-the-scenes at Tesla's Fremont factory (Youtube: CleanTechnica)

Tesla is producing ever better vehicles, ever faster. “The number of labor hours needed to complete a vehicle has decreased 33% since early 2016,” a Tesla spokesperson told CleanTechnica. “Of the 250,000 Tesla vehicles ever produced, more than half were built in the past 18 months. Whereas before, it took three shifts with considerable overtime to produce our target annual production of 100,000 Model S and X vehicles, now it can be done with only two shifts and minimal overtime.”